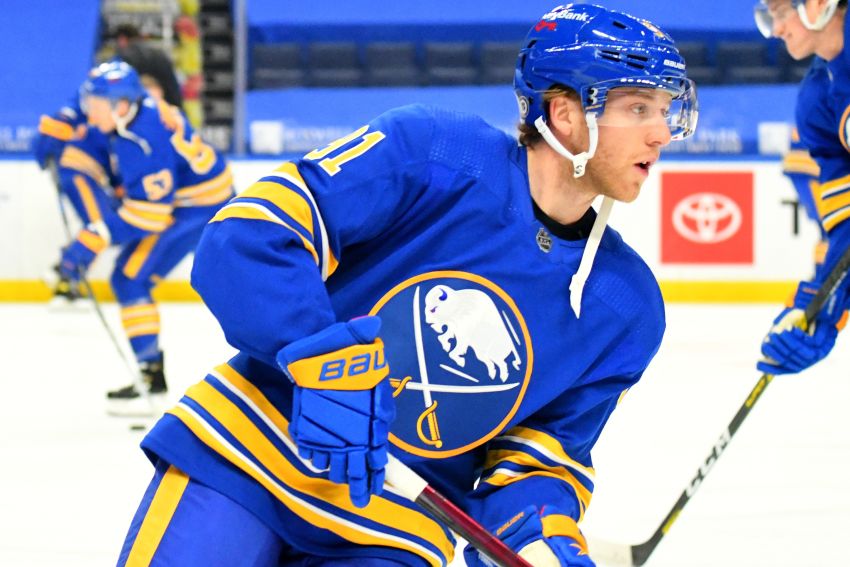 Having played for four teams in three seasons, Buffalo Sabres winger Drake Caggiula understands how fleeting opportunities can be in the NHL.

Caggiula, a prized college free agent in 2016, has bounced around since the Edmonton Oilers traded him in December 2018, playing for the Chicago Blackhawks and Arizona Coyotes before the Sabres claimed him off waivers April 9.

The North Dakota product lasted only 27 games with the Coyotes after signing a one-year contract.

Prior to Friday’s practice at Warrior Ice Arena in Boston, interim Sabres coach Don Granato could see how Caggiula, 26, was enjoying his fresh chance and new teammates’ company.

“He’s excited in general just to have an opportunity to keep playing the game,” Granato said on a Zoom call after the Sabres prepared for this afternoon’s game against the Bruins. “He has a deep passion for the game and for competing. And so he’s a guy that when given an opportunity, he cherishes it. He realizes every moment’s an opportunity to play in the National Hockey League, to jump over the boards and be on the ice and have a jersey on. He brings that passion into every shift.”

That passion has been evident in the last few contests. The 5-foot-10, 176-pound Caggiula recorded a game-high five hits while playing a season-high 15 minutes, 48 seconds in Thursday’s 5-2 loss to the Bruins.

He has recorded zero points and seven shots on goal in six outings with the Sabres.

“I’ve been getting better and better as the games have gone on,” Caggiula said following Thursday’s contest. “I’m feeling confident and enjoying coming to the rink again. I think that’s a big thing for me is loving what I do and playing the game with passion. It’s been a good reset for me. I’ve been happy with the way I’ve been playing.

“I’d like a few more bounces and maybe a couple goals here or there, but the opportunities are there, it’s just a matter of time before it goes in the net for me.”

After playing on the fourth line for five games, Granato promoted Caggiula to right wing beside center Dylan Cozens and Anders Bjork on Thursday.

“He’s not on the big side but he’s feisty and finished a lot of hits last night,” said Granato, who coached Caggiula with Chicago. “It impacted – they knew who he was, the other team.”

Granato said he likes how Cozens and Bjork “are progressively gaining chemistry, a rhythm together.” Caggiula, Granato said, offers his linemates “some fiery competitiveness.”

“It’s a good fit,” he said. “We know Dylan is an ultra competitor, and to give him a partner in that regard is something we wanted to look at. We liked it last night, but yet it’s a progression. But I think they can keep getting better. They looked better today in practice.”

After the Sabres claimed Caggiula, he flew commercial to Buffalo, meaning he had to follow NHL COVID-19 protocols and quarantine. He played his first game April 20 having only skated on his own and participated in one morning skate.

“There was no easing into it, really,” Caggiula said. “I had a couple skates by myself after quarantine was done and hopped right into games.”

Moving Caggiula up forced Granato to put Tage Thompson, who had been playing right wing with center Casey Mittelstadt and Rasmus Asplund, beside fourth-line center Riley Sheahan and Tobias Rieder.

“I think he’s dialed in there and is effective there and can impact that power play,” Granato said. “But Caggiula jumped into that spot and unfortunately for Tage he went to a spot with fewer minutes.”

Thompson has compiled zero goals, one assist and a minus-6 rating in his last seven games. His late cross-checking penalty in Tuesday’s 3-1 to the New York Rangers irked his coach. Granato, however, said he did not demote Thompson because of that infraction.