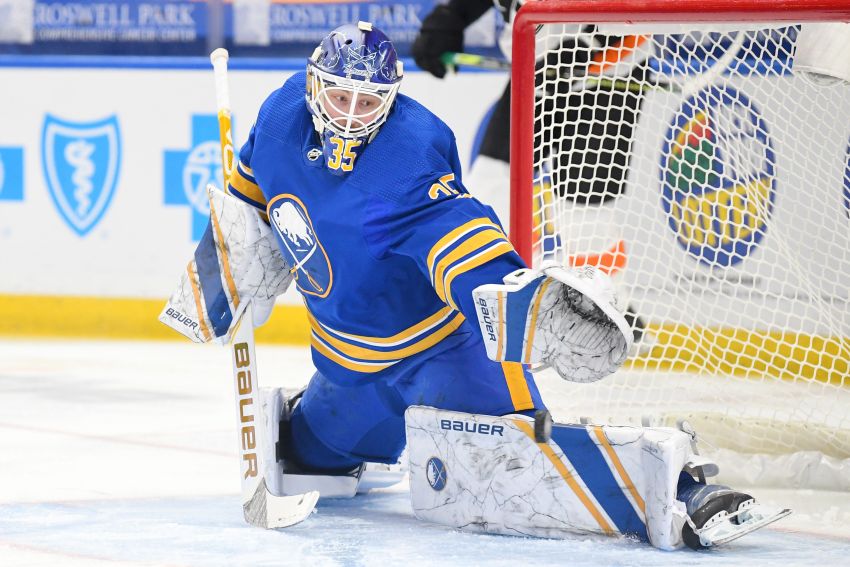 In the barely a week, the Buffalo Sabres have said goodbye to four of their most talented players: goalie Linus Ullmark, center Sam Reinhart and defensemen Jake McCabe and Rasmus Ristolainen.

And in the coming days or weeks, they will likely trade captain Jack Eichel, their most dynamic player and the face of the franchise.

Remember, the Sabres finished dead last in the 2020-21 season, winning only 15 of their 56 games, with those players. How bad might they be in the upcoming campaign?

Ullmark’s departure – he signed a four-year, $20 million contract – leaves a massive hole in net. On the NHL’s worst team, he somehow compiled a 9-6-3 record with a 2.63 goals-against average and a .917 save percentage in 20 games .

The Sabres don’t have a replacement for the Swede, who morphed into their backbone and MVP last season.

Top prospect Ukko-Pekka Luukkonen needs more seasoning in the minors. The Sabres don’t want to rush the Finn. Veteran Dustin Tokarski proved he can be a capable fill-in while playing 13 games last season. Still, he just made his first NHL appearances in more than five years.

The Sabres on Wednesday also lost backup goalie Carter Hutton, who signed a one-year deal with the Arizona Coyotes.

Not surprisingly, teams gobbled up the top free agent netminders Wednesday, signing 14 by early in the evening.

The 6-foot-2, 186-pound Anderson spent most of last season, his 18th NHL campaign, on the Washington Capitals’ taxi squad. He recorded a 2-1-0 mark with a 2.13 goals-against average and a .915 save percentage in four games.

Anderson and Dell aren’t likely to make anyone forget about Ullmark.

Ullmark, who turns 28 on Saturday, couldn’t pass up an opportunity to join the Bruins, one of the NHL’s perennial heavyweights.

“Ever since we started the whole process, it felt right,” Ullmark said during a virtual news conference Wednesday. “We had our conversations going into the summer with Buffalo. It didn’t work out in the end and when Boston came knocking on my door … they told us about the situation, and they were happy to sign me, we started that process. The longer the day went by, it just felt better and better. Very excited about what’s to come.”

Tuukka Rask, the Bruins’ starting goalie for the last decade, underwent surgery Wednesday to repair a torn labrum and could be sidelined until the winter. Bruins general manger Don Sweeney said Rask, a free agent, could be re-signed later.

So before the Bruins inked Ullmark, they had two rookies goalies: Jeremy Swayman and Daniel Vladar. Ullmark will likely be the Bruins’ No. 1 goalie and be backed up by Swayman, who played his first 10 NHL games last season.

The Bruins traded Vladar to the Calgary Flames on Wednesday to make room for Ullmark.

“We were fortunate to bring in a goaltender who’s at a primary age, with a wealth of experience,” Sweeney said of Ullmark. “We just think where we were currently sitting with two young goaltenders, we needed to be prepared and allow Tuukka all the time he needs to get healthy.”

Leaving the Sabres, of course, was emotional for Ullmark. They drafted him in the sixth round in 2012, 163rd overall. He grew up in the organization.

“Sabres fans, I love you guys from the bottom of my heart. You’ve always been great to me. That’s what I wanted to say about that. Now, right now, I’m looking forward to creating some new bonds with the new fans, new players, new team and personnel.”

He graduated to Buffalo in 2018-19, first serving as Hutton’s backup. But over the last two years, he wrestled the starting job away from Hutton, compiling a 26-20-6 record in 54 games.

Hours before Ullmark left, McCabe agreed to terms on a four-year, $16 million contract with the Blackhawks.

McCabe, 27, makes his offseason home in Lake View, Illinois, about 20 minutes outside of Chicago. He said joining the Blackhawks is “a dream come true.”

McCabe said his wife, Gaby, is from Downers Grove, Illinois.

When he walked into the team’s practice facility Wednesday, Fifth Third Rink, he said he felt “chills.”