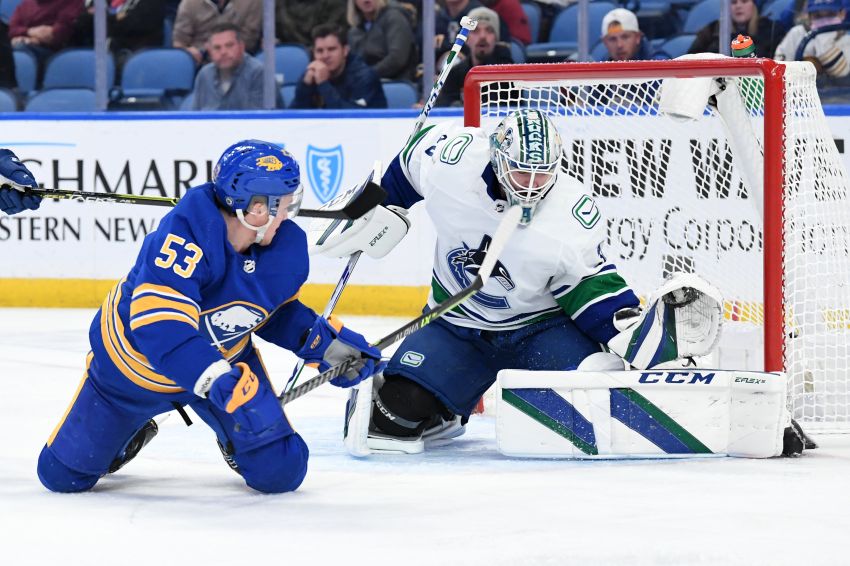 BUFFALO – Maybe, just maybe this is the start of something special. With Tuesday’s thrilling 5-2 victory over the Vancouver Canucks, the Sabres improved to 3-0 for the first time in 13 years. That they’ve done it with a roster devoid of stars doesn’t mean it’s a fluke.

Right now, the Sabres play with purpose, speed and for each other. They come at their opponents in waves. They’re fun to watch and don’t seem to be rattled by anything.

“We know we have to earn everything,” said Sabres center Dylan Cozens, who recorded two assists. “We know it’s not going to be easy, but everyone on this team has something to prove. We want to prove all the doubters wrong. We want to go out there and show that we can be a really good team in this league.”

In Tuesday’s win before 7,376 fans inside KeyBank Center, the Sabres started slowly, falling behind early and again in the second period. Both times, they roared back, erasing the deficit within minutes.

Then the Sabres buried the Canucks early in the third period. Winger Jeff Skinner broke the 2-2 tie at 3:33, roofing a shot under the crossbar as he spun around and fell to the ice.

“We were excited for him,” said winger Kyle Okposo, who scored the Sabres’ first goal, his 200th in the NHL. “Great goal. Not many guys in the world that can spin around like that and tuck it top shelf.”

“Skinny, he plays hard, he practices hard, he cares,” Sabres coach Don Granato said. “Like goal scorers, when they find their groove, they can ratchet it up. So we hope that’s the case. But he’s putting the work in. When you see a guy get rewarded for that and, obviously, a very big goal for us, it’s awesome.”

In the waning minutes, after winger Rasmus Asplund’s empty-net goal, the small but vocal crowd started chanting “3 and 0!”

But Granato, whose team pumped 43 shots on goal, said the buzz in the dressing room isn’t about winning.

“It’s they play hard for each other and they want to come to the rink and see their buddies,” he said. “They got hard in practice. They’re building that. It’s not something we’re doing as coaches, obviously. They enjoy being around each other and you can feel and see that. For them to get rewarded by winning is even better.”

Okposo said the Sabres know how they want to play and “believe in it.”

“It’s a way that allows us to make plays and be confident with the puck,” he said. “It’s something that I think’s been missing here. I’ve found that in the past when we give up a goal we get on our heels, we stop making plays, we start shooting the puck around and it becomes jagged and not connected and it seems like now everybody wants the puck.

“You go through ups and downs and you got to keep this momentum when you have it, so we’re just hoping to continue to keep that confidence for the season. We know it’s going to dip at some points, we have a young group. But if we can continue to practice well and have games like that, it’s going to be fun.”

The Sabres’ up-tempo practices have buoyed their hot start. Granato has demanded more than his predecessors, and his players have carried their new habits into games.

“We do drills where it forces you to make plays with guys on you and you become better at it automatically just by doing it every day,” Okposo said. “When you get into the games and you get that pressure and you feel that heat, it doesn’t feel as hot. You’re able to calm down and make a good read, make a play and we’re supporting each other out there.

Sabres defenseman Rasmus Dahlin, who briefly left the contest after taking a puck in the face, played his 200th NHL game.