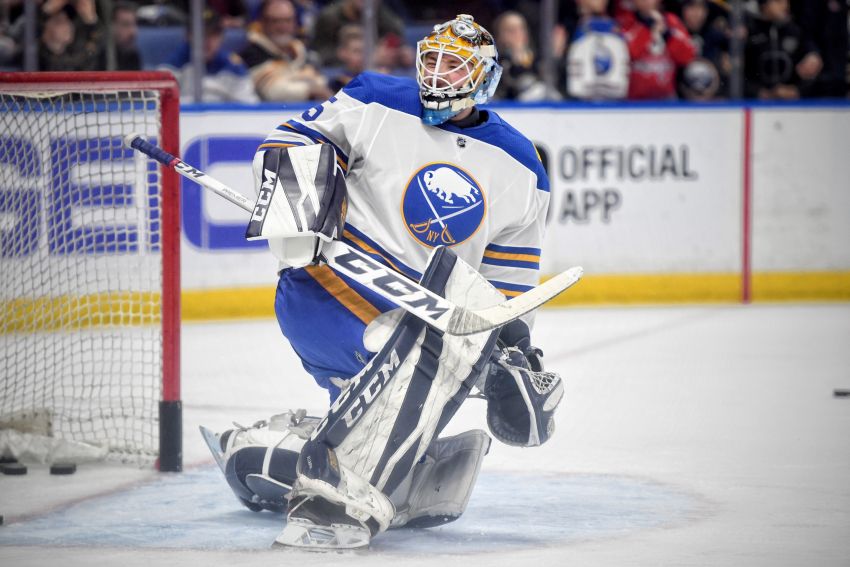 BUFFALO – Nine years ago, the Sabres, whose knack for unearthing mid- and late-round draft gems helped them morph into a Stanley Cup contender earlier in the decade, found another undervalued youngster.

When the Sabres selected Marcus Foligno in the fourth round, 104th overall, he was simply a talented kid with a familiar name.

But the son of former Sabres captain Mike Foligno would quickly develop into one of junior hockey’s top forward prospects.

By 2012, Marcus Foligno was a regular in Buffalo, where he played 347 games before the Sabres traded him to the Minnesota Wild last year.

Only one player drafted after Foligno that year, Marcus Kruger, has played more NHL contests than Foligno’s 424.

Well, Foligno is the last player the Sabres drafted in the third round or later and developed into an NHL regular.

Most analysis of the Sabres’ drafting woes rightfully focuses on their early misses.

Center Mikhail Grigorenko, the 12th overall choice in 2012, is already out of the NHL. The Sabres then moved up to 14th to nab Zemgus Girgensons, who has become just a third- or fourth-liner after showing early promise.

Vaclav Karabacek, the 49th pick in 2014, scored zero goals in 28 ECHL games last season. So unless Eric Cornel earns a recall someday, all three forwards chosen in the second round that year – the Sabres traded Brendan Lemieux – will likely never play for them.

The Sabres’ stunning run of futility – they’ve finished dead last in three of the last five seasons – can be dissected dozens of ways. But their inability to consistently draft NHL talent has contributed the most to their laughingstock status.

Whiffing on early picks can set you back years. Still, it happens to even the best teams. Trying to project the long-term potential of a teenager is difficult.

If you can’t supplement your misses by finding some mid- and late-round picks, you’re in trouble.

In 1999, for example, the Sabres picked winger Barrett Heisten 20th overall. Heisten never played a game for Buffalo. But in the fifth round, 138th, they grabbed goalie Ryan Miller, a future Vezina Trophy winner.

Miller, winger Maxim Afinogenov (third round in 1997, 69th) and defenseman Brian Campbell (sixth round in 1997, 156th) comprised some of the core that led the Sabres to consecutive Eastern Conference final appearances in 2006 and 2007.

Sabres GM Jason Botterill, who will run his second NHL Draft starting Friday in Dallas, won three Cups as an executive with Pittsburgh, in part, because the Penguins often drafted well. In addition to Sidney Crosby and Evgeni Malkin, they found big and small pieces in later rounds to complement their superstar centers.

In 2012, the Penguins took goalie Matt Murray, who backstopped them to championships in 2016 and 2017, with the 83rd pick. Ten spots earlier in the third round, the Sabres drafted forward Justin Kea, who now plays in the ECHL.

Botterill will have it easy picking defenseman Rasmus Dahlin first overall Friday. The tough part for Botterill and his scouts will come in the later rounds

Drafts can be difficult to judge for a few years, so forget about the last three, which, to be fair, show some promise with youngsters like Will Borgen and Cliff Pu in the pipeline.

From 2010 to 2014, the Sabres selected 29 players from rounds three to seven under the regimes of former GMs Tim Murray and Darcy Regier.

So far, six of those players have combined to play only 90 NHL games, 47 of which belong to winger Nick Baptiste.

That’s it. The 2010 (eight) and 2014 (five) drafts have yielded zero big league appearances from the final five rounds.

So other than winger Sam Reinhart, the second overall pick, the rest of the 2014 draft could be a complete bust.

Of course, a few of those dismal drafts could look better in the near future.

Goalie Linus Ullmark, a sixth-round choice in 2012, 163rd, is set to join the Sabres next season, possibly as their starter. The Swede has already made 26 NHL appearances.

One of the new European scouts owner Terry Pegula hired after purchasing the Sabres in 2011 found Ullmark. For years under former owner Tom Golisano, the team utilized video scouting.

No wonder the Sabres’ drafting suffered.