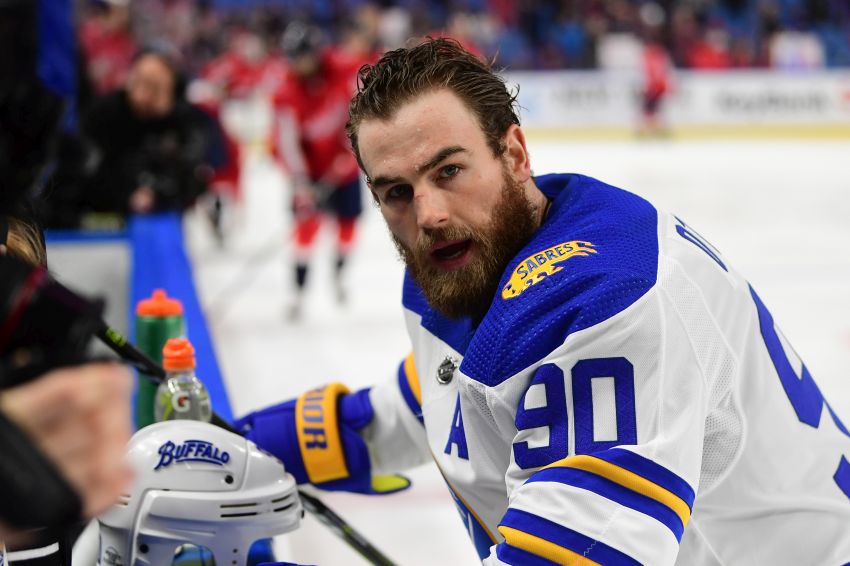 BUFFALO – Right now, save for young centers Jack Eichel and Casey Mittelstadt, anyone is probably available from the Sabres if you meet their asking price.

So for a puck-moving defenseman and a speedy winger capable of scoring 20 goals, perhaps you can pry center Ryan O’Reilly away at the NHL Draft later this week in Dallas or in the near future.

Rasmus Ristolainen is clearly beaten down by the Sabres’ constant losing. A change of scenery might be the best solution. Can general manager Jason Botterill find another young defenseman who possesses Ristolainen’s talents and do, say, a straight-up swap?

Following a wretched first half, winger Sam Reinhart morphed into one of the NHL’s best scorers, compiling 20 goals and 39 points over the final 44 games last season. A 30-goal, 70-point campaign from the former second overall pick certainly seems reasonable.

Yes, Reinhart, who needs a new contract, looks like a franchise cornerstone. But what if a team offers the Sabres a package that could fill, say, two holes? What if the Sabres think Reinhart, an average skater, might struggle as the NHL becomes faster and faster?

And how about Brendan Guhle? The Sabres have possibly labeled the former second-round pick an untouchable. These days, you can never have too many slick defensemen zooming all over the ice. He’s likely staying put.

Again, if Guhle can yield a winger the Sabres believe will thrive beside Eichel, maybe they’re enticed to make an unexpected deal.

What do O’Reilly, Ristolainen, Reinhart and Guhle all have in common? Botterill’s predecessors acquired them. The new GM has no attachment or investment in them.

Botterill, of course, wants to overhaul the league’s worst team. Following the trade deadline in February, the then-rookie GM said, “The group that we have right now is not working.”

When Botterill last addressed the media in April, he looked embarrassed and talked about how the disastrous season angered him.

So just about anything should be on the table in the coming weeks. While the Sabres own some nice pieces – most teams have maybe one talented center; in Eichel, Mittelstadt and O’Reilly, they have three – they don’t possess nearly enough assets.

One veteran scout familiar with the Sabres pegged their biggest needs as goaltending and a veteran defenseman to play on the first or second pair. Botterill also needs to add speed on the wings and depth.

It can be argued O’Reilly is Botterill’s biggest chip. After O’Reilly explained in April how the trying season sapped his love for the game multiple times, some observers figured he was a goner, even that he was trying to orchestrate his way out.

But O’Reilly, 27, was more likely just being his regular, honest self. The nine-year veteran is always blunt, accepting blame for, well, everything. Few players take losing harder than him.

The Sabres have lost 62 percent of their games since his arrival in 2015, never sniffing the playoffs. Can you really blame him for expressing his frustration?

It’s important to remember O’Reilly kept showcasing his normal passion on the ice as he averaged almost 21 minutes an outing. It’s more likely he meant coming to the rink felt like a job or that hockey simply wasn’t much fun. He has also said he wants to return.

Dealing O’Reilly, even if he brings back two or three players, would leave a massive hole in the lineup. At his best, he’s one of the NHL’s best and most versatile centers. Sabres coach Phil Housley utilizes him constantly, throwing him out for faceoffs all game.

It’s unlikely the Sabres would receive a player of O’Reilly’s caliber in return. Sure, he carries a huge $7.5 million cap hit. But the Sabres have already paid O’Reilly $20 million over the first two seasons of the seven-year, $52.5 million deal.

That said, O’Reilly’s value might never be higher. He’s accumulated a lot of mileage as he approaches 30. Like Reinhart, skating isn’t a real asset. This could be the right time to deal him since the Sabres likely won’t contend for a playoff spot next season.

Whatever happens in the coming days or weeks, expect it to be a notable deal, even a blockbuster.

The Sabres will hold their annual summer development camp from June 27 to 30 at HarborCenter, the team announced Monday.

Sabres prospects, including youngsters drafted this week, will attend. The on-ice sessions from June 27 to 29 are free and open to the public. Admittance is on a first-come, first-serve basis.

The camp will conclude with The French Connection Tournament, an intra-squad three-on-three challenge.

Tournament tickets are available exclusively for 2018-19 season-ticket holders, who will receive an email next Monday. Tickets will be free and limited to two for each account.