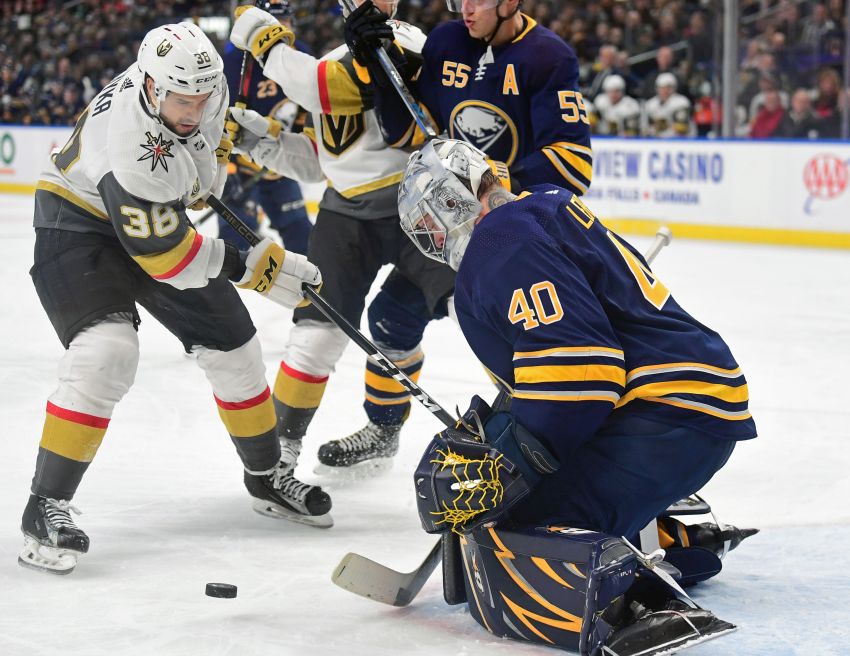 BUFFALO – Before a rough outing last week, Sabres backup Chad Johnson was among the NHL’s hottest goalies, going 6-2-0 over a six-week stretch.

But Johnson, 31, might be getting a break soon. In fact, in the near future, he could even be scratched for some games.

The Sabres recalled Ullmark, 24, their netminder of the future, Tuesday. Coach Phil Housley said they plan to give the Swede, a two-time AHL All-Star, some action.

It’s unclear how long Ullmark might stay up or if he’ll start tonight against the Toronto Maple Leafs at KeyBank Center. He left Wednesday’s practice inside HarborCenter early for a personal matter, Housley said.

But soon or later, Ullmark, the only Sabres goalie with a contract for next season, will play. When they summoned him Jan. 11, he responded with a 44-save effort in a 2-1 win against the Columbus Blue Jackets, his only NHL appearance this season.

In recent weeks, the last-place Sabres have been examining some of their prospects up close. Wingers Justin Bailey and Nick Baptiste and defenseman Brendan Guhle should all play again tonight.

It makes sense Ullmark, who made 20 of his 22 NHL appearances two seasons ago, received a recall.

Still, having three goalies on the roster rarely works well, something Housley understands.

“I wouldn’t like it … if you’re a true competitor,” Housley said. “I think our goalies feel the same but they understand the situation, where we’re at in our evaluation of all our players. He’s earned a right to come up here.”

Ullmark earned a recall because he has been one of the AHL’s best goalies this season, going 20-11-10 with a 2.44 goals-against average, a .923 save percentage and two shutouts in 42 contests with the Rochester Americans.

“You measure his consistency down in Rochester, his numbers speak for themselves,” Housley said. “I think … he had a really good, solid game against Columbus in here. I really like that he was out attacking, he was on his angle, he was challenging shooters. I also like his puck movement, mobility back there.”

Lehner said: “It’s very normal for teams in our situation (to have three goalies). There’s a lot of young guys up here right now, everyone’s getting a lot of experience.”

Johnson, who didn’t dress the last time Ullmark played, knows “there has to be some look to the future.”

“I understand that part of it,” Johnson said. “At the end of the day, it does (stink) having three goalies, because obviously, being the older guy, I feel like I’m the odd man out, which is tough. It is what it is. There’s only three weeks left and you deal with it.”

In his early days with the Ottawa Senators, Lehner, 26, was the prospect coming up from the minors and taking playing time from the established talent.

“I was in the same situation since I was 19 years old,” Lehner said. “I was up and down, I got looks, I got games. It’s how you break into the league. It’s obviously a situation where that’s where our team’s at.”

“I’m going to play games,” said Lehner, who has played 50 times. “Linus is going to get some looks, he deserves it.”

Meanwhile, Johnson, an unrestricted free agent, has played 27 contests. He started slowly this season before catching fire in January.

“We all want the net, we’re all confident, we all believe we can play in this league,” Johnson said. “I feel like that. … I feel I can have success and be a good goalie or a great goalie in this league given the right opportunity. It’s part of the game.

“Every … organization has three guys now that can play in the NHL and it’s just a matter of time who gets there and the opportunity they get and where the organization sees them fitting in.”