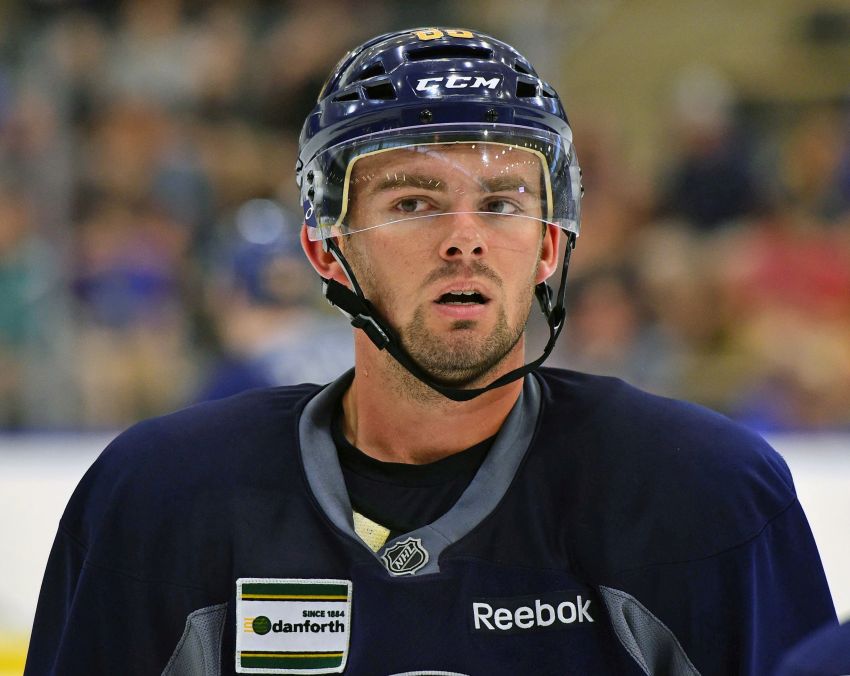 BUFFALO – Sabres prospect Eric Cornel figured, hey, as a second-round NHL pick fresh off a big junior season, hockey might be easy for him.

But instead of thriving after the Sabres drafted him 44th overall in 2014, Cornel struggled to build on a 25-goal, 62-point breakout season with the Peterborough Petes.

“I think getting drafted might have gone to my head a little bit,” Cornel said Thursday following a development camp session inside HarborCenter.

The poor season helped Cornel, 20, realize nothing would be given to him.

“You have to work at it,” he said. “I think I really learned that at development camp last year, talking to the development guys throughout the season this year.”

So the 6-foot-2, 192-pound Cornel committed himself last summer to making his final Ontario Hockey League season a memorable experience.

Cornel enjoyed perhaps the best season by a Sabres prospect in 2015-16, a huge 27-goal, 83-point campaign in which he served as Peterborough’s captain. No one in development camp recorded more points or assists (56) last year.

“(He) went through some adversity but handled it well, did the right things in the summer and came back and proved to be the player I think a lot of (us) thought it could be,” Hull said.

“It’s probably his willingness to work and get better, and certainly when you see the way he works in the gym and you see his work ethic in practice, it’s really strong,” Lambert said.

Cornel signed a three-year, entry-level contract in March. He should start next season with the Amerks, a team he played 12 games for late in the past two years after signing tryouts.

Very quietly, Cornel has developed into one of the Sabres’ best forward prospects.

“I think every night I was a factor,” he said.

Cornel’s strong playmaking ability made him a factor most nights. He ranked 13th in OHL scoring and eighth in assists.

“(I’m a) pretty good skater,” he said. “I play well with speed. I’m a good playmaker. I like to set guys up, draw players in and find the open man.”

To Hull, who played 831 NHL games, Cornel also excelled because he embraced his role as captain.

“He had to present himself well at all times,” Hull said. “He did that for us. … He’s a guy that just leads by example. I think given that little added stuff on his plate, I think he really took control of it and took another step in his progression as a hockey player.”

Part of that progression included morphing into a better two-way player. Halfway through the season, Cornel wanted to start killing penalties. So he said he spoke to his coaches and began “developing that part of my game.”

Cornel was killing penalties by the playoffs.

“Everybody wants to be that guy on your team your coach can look to in all situations, so I really worked hard over my junior career,” he said. “That was a nice way to end it with a strong season and being looked on as a leader.”