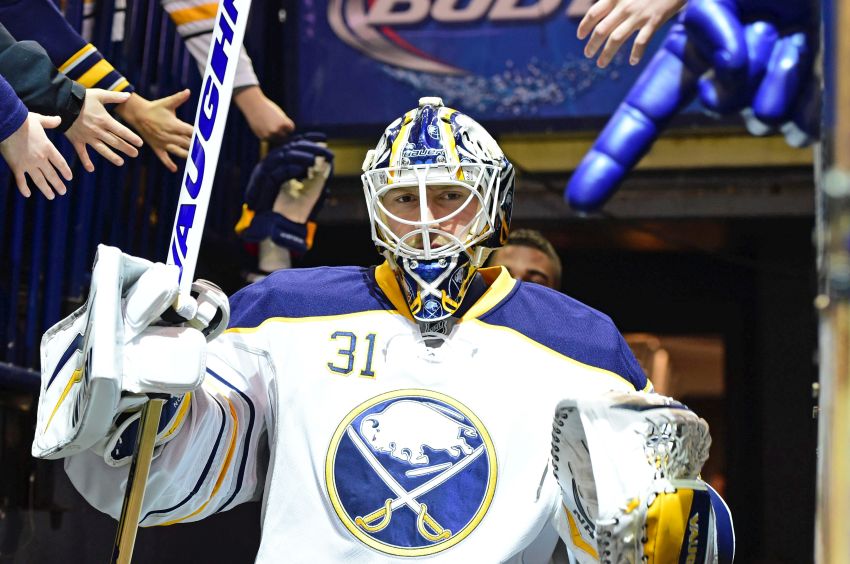 In fact, after the backup’s strong 24-save performance in Friday’s 3-1 win in San Jose, the joke became the Sabres should’ve left him there because the Sharks needed a new No. 2 goalie badly.

But the Sharks acquired James Reimer from Toronto on Saturday, the same day St. Louis received Anders Nilsson from Edmonton.

In a matter of hours, the market for Johnson, an unrestricted free agent after the season, shrunk significantly. The trade deadline passed Monday and Johnson, 29, stayed put.

Johnson has enjoyed a strong season, going 14-14-3 with a 2.45 goals-against average, a .917 save percentage and one shutout in 33 games (29 starts). He subbed admirably for Robin Lehner during the starter’s three-month absence.

So could Johnson be re-signed and be the backup again next season?

“I could envision it, yes,” Sabres general manager Tim Murray said Monday inside the First Niagara Center. “I haven’t spoken to him or his representative. I don’t know what their expectation will be after having the year that he’s had, a pretty good year with pretty good stats. I like the way Chad’s played.”

Johnson has spoken about his desire to stay. Still, he could want a two-year deal and the Sabres might only want to offer a single season with rookie Linus Ullmark in the pipeline.

Whatever the happens in the future, the Sabres kept a quality No. 2 goalie on Monday.

While many fans will make a big deal about the first NHL meeting between Edmonton Oilers phenom Connor McDavid and young Sabres star Jack Eichel tonight, the rookies picked first and second last year and forever linked together aren’t close and barely know each other.

“For me, it’s a bigger game because I have some family and some buddies from Erie coming, so I’m more excited from that sense,” McDavid, who played junior hockey in Erie, told the Edmonton Journal. “I’m sure it’ll be fairly well covered but I think for both of us it’s just another game.”

He added: “We were drafted together, sure, but other than that we don’t share that much in common.”

A broken collarbone kept McDavid out the Oilers’ 4-2 win against the Sabres on Dec. 6 in Edmonton.

– Murray said the Sabres sent rookie winger Justin Bailey and forward Cal O’Reilly to the Rochester Americans on Monday so they’re eligible for the AHL playoffs. O’Reilly will be recalled again. Someone else could also be summoned.

Update: The Sabres have recalled O’Reilly and winger Dan Catenacci.

– Murray expects winger Tyler Ennis, out since Dec. 30 with a suspected concussion, to play again this season. Ennis has been skating on his own without experiencing any symptoms.

– Murray said the Sabres haven’t had any talks with defenseman Rasmus Ristolainen’s camp. The Finn’s due to become a restricted free agent this summer.

– Murray said he had a conversation about forwards Jonathan Drouin and Brandon Pirri with their GMs. Tampa Bay kept Drouin, who has stopped playing for the organization. Florida dished Pirri to Anaheim.

– The Sabres had Monday off.

One thought on “Sabres goalie Chad Johnson could return as backup”