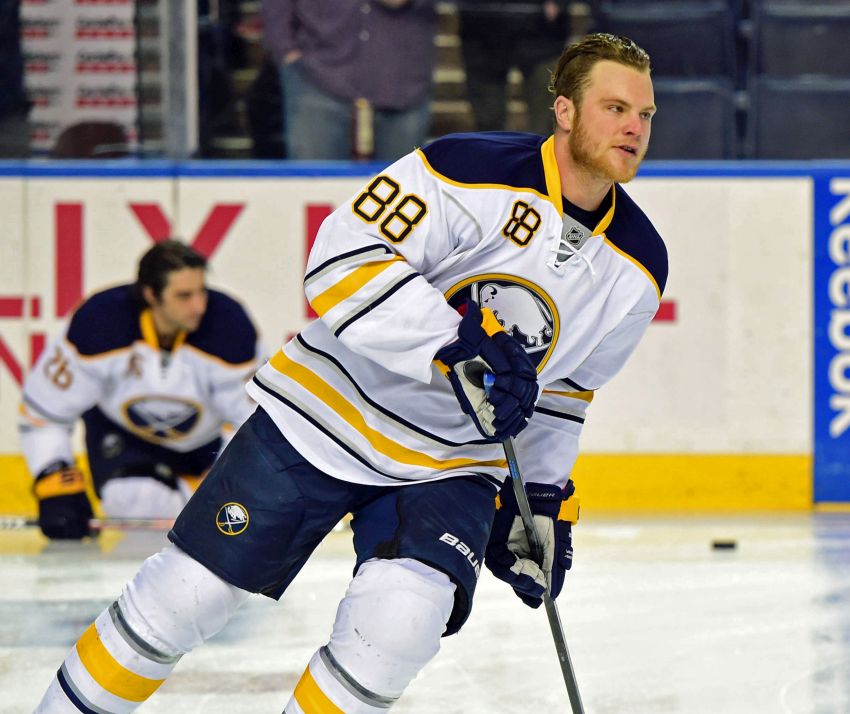 BUFFALO – When free agency opens July 1, if Jamie McGinn is available, the Sabres would be interested in re-signing the popular winger they dealt to the Anaheim Ducks prior to the trade deadline, general manager Tim Murray said Monday.

In his 63-game run here, the versatile McGinn fit in well, scoring 14 goals and 27 points while skating on a slew of lines. Off the ice, McGinn, 27, grew close to rookie Jack Eichel.

Murray said he had spoken a bit with McGinn’s camp about a contract extension. The two sides, he said, had “different expectations.”

“It didn’t get close, and I understand why,” Murray said inside the First Niagara Center, where the Sabres host rookie Connor McDavid and the Edmonton Oilers tonight, the first NHL meeting between the phenom and Eichel, the top two picks last year.

McGinn, an unrestricted free agent, could possibly earn a few extra million or a longer term by waiting to sign. Murray couldn’t let his top asset walk for no return, so he traded him to the NHL’s hottest team for a conditional third-round pick in 2016, the Sabres’ lone deal of the day.

“There’s a difference between a guy signing now and signing July 1,” Murray said. “All the comparables that we have and they have right now go out the door July 1. So they have to decide at that time there could be a big payday out there.”

If the Ducks win two playoff rounds and McGinn plays half the games, the pick becomes a second-rounder in 2017, Murray said. The Sabres have 21 picks in the next two drafts.

Murray believes McGinn, a physical presence with a nose for the net, will fit in well with the Ducks, a heavy team.

“I think McGinn has a chance to be a valuable piece to a heavy playoff team,” Murray said. “He knows no other way to play but hard.”

“Not close (to deals) and not disappointed,” Murray said. “You need a partner to dance.”

There weren’t many dance partners around the NHL for much of the day, especially early on. The McGinn deal – like many others – was announced after the official deadline.

“It’s the same every year,” Murray said. “We’ve sat up there for five days. We think we’re at least prepared for every scenario. You’re making calls and getting some calls but there’s no’s urgency. I guess as we all know, in any walk of life there’s never urgency until there’s a deadline. I never did my homework until the day the project had to be in.”

Then Murray joked about his colleagues.

He added: “You do more in 45 minutes than you do in the full week before.”

Murray also traded defenseman Mike Weber to Washington for a third-round pick a week ago and made a seven-player AHL deal Saturday that netted them high-scoring forward Cole Schneider, a Williamsville native.

Monday was much quieter for the Sabres than recent years. They made four trades last year in the hours before the deadline and three in 2014.

Murray has a track record of making big, multi-player “hockey deals.” Those, however, can be difficult to complete during the season. He said four GMs he chatted with told him they could talk again in the summer.

Why was there less action than usual all over Monday?

“I think teams are getting more specific in what they need as a rentals versus let’s just go out and get the best player available and he really doesn’t fit our team,” Murray said.

This is, of course, a new era for the Sabres. They’re no longer a laughingstock. They’ve made some significant strides this season coming out of their long rebuild.

Still, they rank among the NHL’s bottom-feeders again.

He added: “I know where we are in the standings. It’s frustrating. It (ticks) me off. But I think we’ve improved greatly.”