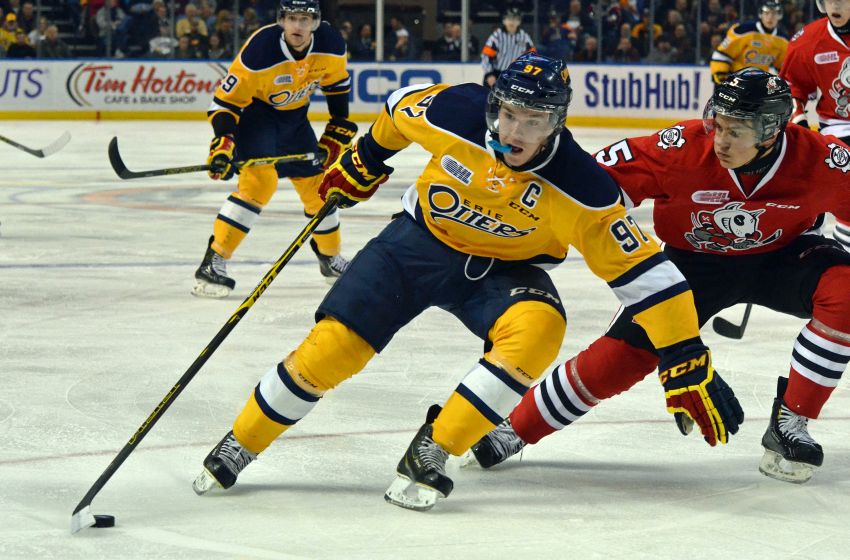 BUFFALO – Six months ago, Steve Poland paid $110 for a discounted gold Sabres alternate jersey at the team store and had 17-year-old junior superstar Connor McDavid’s last name and No. 97 stitched on it.

“I bought it as a joke for this forthcoming season,” Poland said Wednesday prior to watching McDavid and the Erie Otters inside the First Niagara Center.

Poland, like a lot of rabid fans, wants the Sabres to lose all season so they have a 20 percent chance to earn the No. 1 pick in the NHL draft lottery.

“We all knew this was what this coming year was going to be about,” Poland said.

For some, it’s all about McDavid.

“Hopefully,” Poland said, “we get the full show tonight.”

The 11,391 fans watching McDavid got the full show Wednesday, a dynamic one-goal, four-point effort in the Otters’ 8-4 win against the Niagara IceDogs.

The scintillating performance will only increase the fawning over the phenom.

McDavid dominated from the get-go, creating a scoring chance just 24 seconds into the contest. He recorded his first assist at 3:57 and had three before the first period ended.

Secondary assists can often just be a simple dish, but McDavid earned two by creating the first two goals. Before the period ended, McDavid scorched a Niagara defender as he roared into the zone, one-handing the puck by him.

“I was just a little bit fortunate to one-hand it by the guy,” McDavid said. “If I didn’t make it, I don’t think coach would be too happy about that.”

McDavid scored in third period, his ninth goal and 29th point in 10 games this season.

“He has the potential to be as good as any player that’s ever played the game,” he said.

Erie general manager Sherry Bassin had a similar feeling after watching McDavid up close for the first time three years ago in Toronto.

“It was like a 9 o’clock game, minor midget game, and everybody’s talking about him,” he said. “The guys say, ‘Wait until you see this guy.’”

When puck dropped, “He takes it like from a standing still start. It’s a like a sprinter coming out of the box,” he said.

Bassin likes to joke his dog, Newman, a traveling companion, knew after two shifts McDavid was the real deal.

“Here’s the best way to say it,” he said, “when you first saw him, you wanted to go back and see him more because you enjoyed it so much.”

Erie, which bottomed out in 2011-12, selected McDavid No. 1 in the Ontario Hockey League draft. The league granted McDavid exceptional status so he could play as a 15-year-old.

“You know about the rainbow and the gold at the end of the rainbow?” Bassin said. “That’s what I was thinking about.”

Once-in-a-generation superstars all possess something beyond natural talent. Those close to McDavid talk about his maturity and humbleness in the same breath as his skills.

Bassin, who said McDavid would be 60-point NHL player right now, traces that maturity to the value system his parents established.

“I tell people he’s a better person than he is a player, and we all know how good a player he is,” he said.

McDavid displayed some of his humbleness Tuesday, saying he wasn’t sure if he would make Canada’s world junior championship squad.

“Let me tell you this, if he doesn’t make the world junior, they shouldn’t even play,” Bassin said. “They should just give the gold medals out first day. But that’s what he is. He doesn’t want anything given to him. So he’s such a delight to be around.”

Of course, the pressure on McDavid will only increase as the season progresses. Toronto and Montreal, two hockey metropolises, are hosting the world junior championship in December. The comparisons to Pittsburgh superstar Sidney Crosby will become more frequent as the draft approaches.

McDavid has been trying to learn about the experiences of some 2014 top draft picks.

“I’ve been kind of texting Aaron Ekblad and Sam Bennett, just getting their thoughts on what their idea of the draft year was,” McDavid said. “I guess it gets a whole lot worse from here is what they’ve been saying. It hasn’t been fun. It hasn’t been bad.”

McDavid thinks he has “a long way to go.”

“My defensive game has to get better, my shot,” said McDavid, who’s just starting killing penalties. “You kind of just have to round off all parts of your game. Today to play in the NHL you have to be a full 200-foot player, do all the little things right. Right now, I would say I’m not that. I think I got a long way to go.” 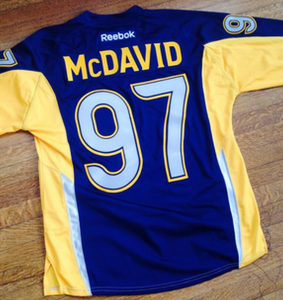