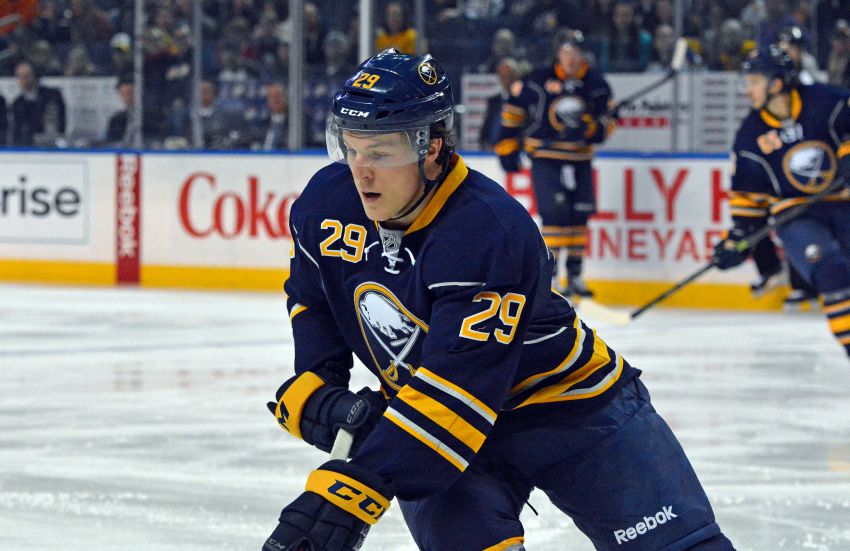 BUFFALO – Sabres coach Ted Nolan offered no details about Nikita Zadorov’s benching Sunday, only saying the defenseman was getting scratched for violating team rules, another episode in the 19-year-old’s turbulent rookie season.

“We had a number of discussions, and another thing happened this morning,” Nolan said prior to the Sabres’ 2-1 shootout loss to the Nashville Predators inside the First Niagara Center. “We’ll talk to him again.”

Josh Gorges will undergo season-ending surgery for his lower-body injury, Nolan revealed Sunday. Tyson Strachan showed up with an infection Sunday. Mike Weber is out two weeks after having surgery to repair the upper-body injury he suffered Friday, Nolan said.

Zadorov’s absence – he was late to a meeting Sunday morning, according to the Associated Press – forced the Sabres to summon  Jake McCabe and Mark Pysyk before Rochester’s 5 p.m. home game. The Americans signed Buffalo native Nick Tuzzolino to a tryout so they had enough defensemen.

Zadorov’s maturity has been a problem all season. Nolan sat him most of October as he worked to develop better habits. The Russian was suspended last month after his flight back to Buffalo from the Dominican Republic following the NHL All-Star break was oversold. Nolan scratched Zadorov for Friday’s 3-1 loss to the New York Rangers because he was “getting a little bit overwhelmed.”

“It’s just part of the growing process,” Nolan said about Sunday’s incident. “We’ll just have to deal with him. He’s a 19-year-old. Sometimes you’re mature in certain things, sometimes you’re not.”

The benching could only last one game, Nolan said.

Acclimating from the NCAA to the AHL wasn’t easy for McCabe, who played seven NHL games last season after the University of Wisconsin’s season ended. He played 43 total games in 2013-14. Sunday was his 50th appearance this season.

“Your body adjusts to it,” McCabe said. “Early on, I couldn’t put three games together to save my life. But now I think I feel more confidence.”

McCabe has four goals and 25 points with Rochester.

Pysyk, meanwhile, played his fifth NHL game this season, skating beside Andrej Meszaros. The Sabres sent him down Dec. 31.

Kane’s issues will be discussed privately later on, Nolan said.

Kane has a stall in the dressing room with a nameplate, although he plans to continue his rehab at home in Vancouver.

Related: Evander Kane happy to be with Sabres: ‘I’m definitely excited to have a fresh start’