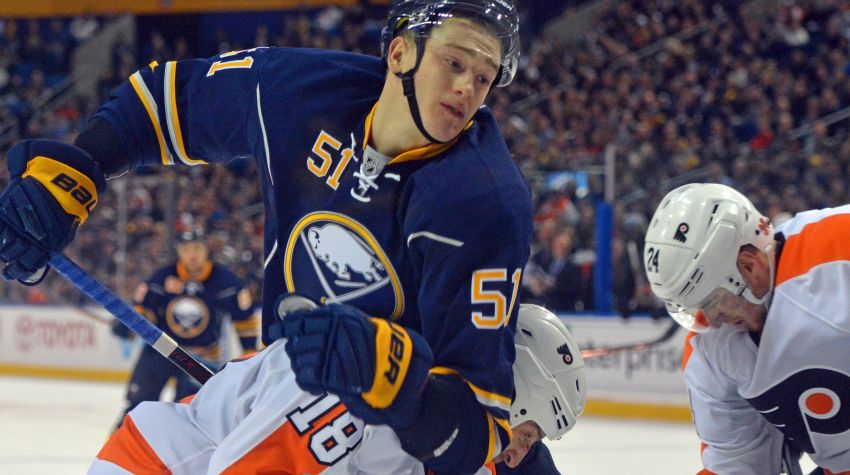 Where was the 19-year-old defenseman? Apparently, stuck in the Dominican Republic.

The Sabres announced at 2:41 p.m. Monday they had suspended Zadorov after he failed to report back to the team on time following the break.

“What can you do?” coach Ted Nolan said after the Sabres practiced without Zadorov inside HarborCenter. “The travel conditions sometimes get in the way. That’s how it is.”

In a statement, general manager Tim Murray said Zadorov would join the team in Calgary, where the Sabres continue their five-game road trip tonight. Nolan wasn’t sure about the length of the suspension.

Zadorov’s maturity has been a big issue throughout the season. Nolan sat him much of October before he earned a spot. The Russian was also scratched twice earlier this month.

In other news, the Sabres recalled goalie Matt Hackett from Rochester on Monday because Michal Neuvirth suffered a lower-body injury working out during the break.

Neuvirth will be sidelined “not long, long, but long enough,” Nolan said. The injury isn’t related to his hip ailment from last season.

Hackett tore up his right knee April 12 in Boston. The 24-year-old rehabbed with the Sabres all season before they sent him to the AHL late last month for some game action. He’s 1-2 with a 3.10 goals-against average and .886 save percentage in three games.

“They said it could be six to nine months,” said Hackett, who believes he’s close to 100 percent. “So seven months, I thought I did some good work and got back early. I’m happy with where my knee’s at right now.”

The Sabres also summoned center Matt Ellis from Rochester before they left. Nolan said the 33-year-old could stay for a while.

“He’ll add that professional leadership, which we need,” Nolan said.

Ellis played four games prior to the break.