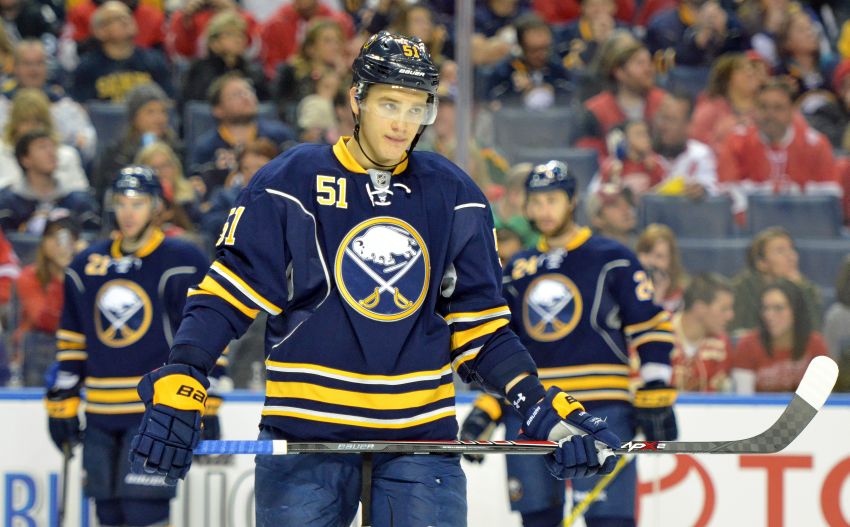 The 19-year-old Zadorov, whose maturity has been a problem all season, was suspended last month after his flight back to Buffalo following the NHL All-Star break was oversold.

“It’s just part of the growing process,” Nolan said inside the First Niagara Center. “We’ll just have to deal with him. He’s a 19-year-old. Sometimes you’re mature in certain things, sometimes you’re not.”

Nolan wouldn’t give many details.

“We had a number of discussions, and another thing happened this morning,” he said about Zadorov. “We’ll talk to him again.”

Right now, the Sabres only plan to sit Zadorov tonight. The Sabres desperately need the Russian. Three defenseman – Josh Gorges, Tyson Strachan and Mike Weber – are injured. The Sabres need to recall two for tonight from Rochester, which has a 5 p.m. home game.

Update: The Sabres have recalled Jake McCabe and Mark Pysyk from Rochester.

Gorges will undergo season-ending surgery for his lower-body injury, Nolan said. The veteran should be ready for training camp. Meanwhile, Strachan showed up this morning with an infection. Weber is out two weeks after having surgery to repair his upper-body injury.

In other news, goalie Michal Neuvirth will start tonight against the Predators, the NHL’s best team.