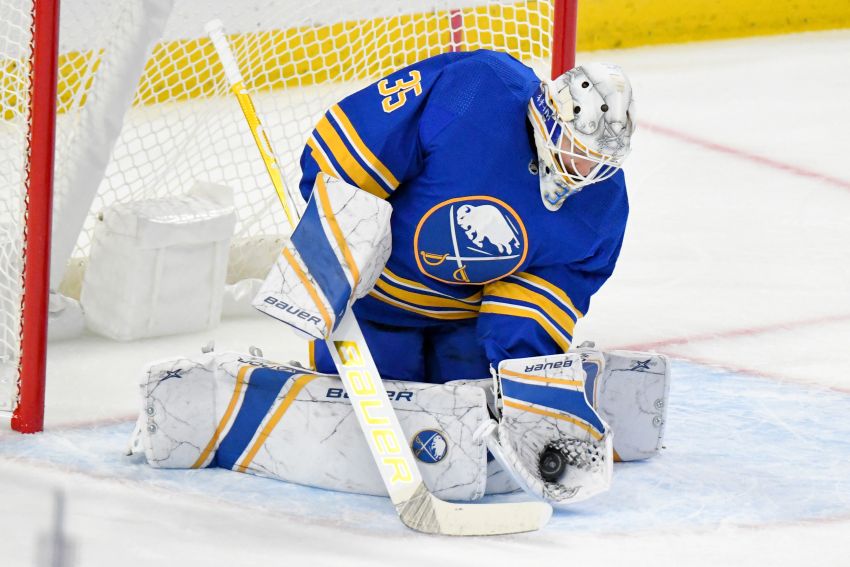 Having been sidelined the last 13 games, Linus Ullmark must keep testing his lower-body injury in practice. So as badly as the Buffalo Sabres need their No. 1 goalie back, he needs more than one session before he can play again.

“For now, there’s no set timetable for me; it’s more of a day-to-day basis,” Ullmark said on a Zoom call Tuesday after practicing for the first time since getting injured Feb. 23.

So on tonight against the Pittsburgh Penguins, interim coach Don Granato said the Sabres will likely give goalie Dustin Tokarski his first NHL start since Dec. 21, 2015. Michael Houser, who has never played in the big leagues, will back him up.

The Sabres also play Thursday in Pittsburgh before closing their four-game road trip Saturday afternoon against the Boston Bruins.

Granato wouldn’t rule out Ullmark playing later in the road trip. The Swede went through drills for 20 minutes Tuesday inside PPG Paints Arena.

The Sabres have imploded without Ullmark, losing every game. Monday’s loss was their 14th straight, tying the franchise record first set by the 2014-15 tank team.

They had a 6-8-2 record when Ullmark left the lineup.

“(We’ve) missed him dearly,” Sabres center Eric Staal said. “He was real solid for us, gave us a chance every time he was in the net and instills a lot of confidence in our team.”

Ullmark said he was hurt during a “chaotic play when there was a lot of drops up and down, back and forth.” The injury forced him to leave after the first period.

“I made the save at the end and just afterwards I felt a little discomfort at first that just kind of grew into something more and more intense,” he said.

Ullmark morphed into the Sabres’ backbone early this season, compiling a 5-4-2 record with a 2.44 goals against average and a .919 save percentage in 12 games.

His replacements have consistently looked wonky. Hutton and ex-Sabres goalie Jonas Johansson, who was traded to the Colorado Avalanche on Saturday, have earned one total win this season. Hutton has registered a 3.47 goals-against average and an .886 save percentage in 13 outings.

The Sabres on Tuesday reassigned top goalie prospect Ukko-Pekka Luukkonen from the Rochester Americans to the taxi squad.

NHL teams must carry three goalies between the active roster and taxi squad this season. Adding the Finn could just be a paper move.

“No timetable yet,” Granato said of Okposo’s potential return.

“I would think Miller would be fine to play,” Granato said. “That’s the hope. Toby maybe is more of a question mark for tomorrow in that regard.”

Tonight’s Amerks game in Utica has been postponed due to AHL COVID-19 protocols affecting the Comets, the league announced Tuesday.

The Amerks, who experienced a COVID-19 pause earlier this month, haven’t played since March 10.