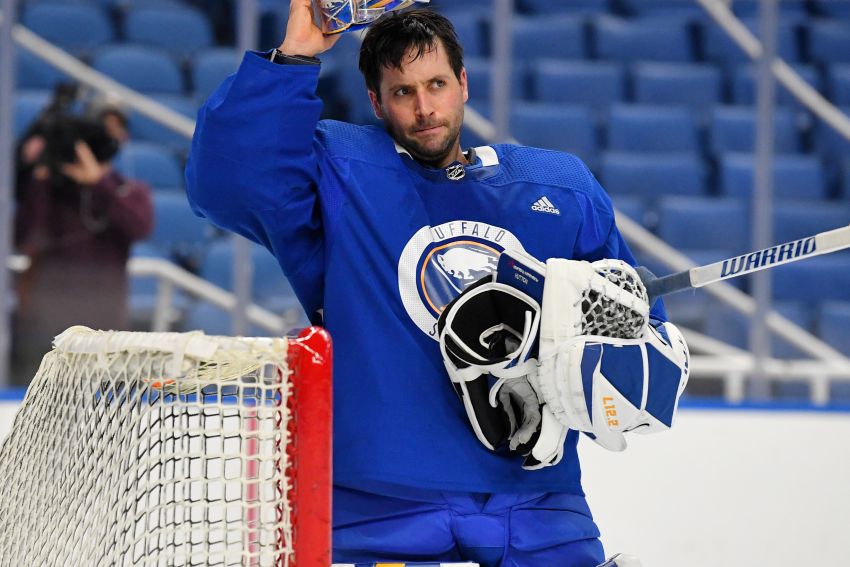 Yes, Hutton, 35, struggled most of last season, losing 12 straight decisions at one point. But his turnaround started at the end of 2019-20, when enjoyed a 6-2-0 run in February.

Hutton performed strongly throughout training camp this year, quickly morphing into one of the Sabres’ standouts. Meanwhile, goalie Linus Ullmark missed the first four sessions of camp as he quarantined at home.

So Hutton stood out as the logical choice for tonight’s game at KeyBank Center, the first of a back-to-back set.

“We’ve really liked Carter Hutton’s camp and he’s come in here extremely confident, very fit, and he’s in a good place,” Krueger said on a Zoom call this morning. “We’re excited about that.”

Hutton said “everyone’s pumped up for the Sabres’ first game since March 9.

“Getting to start at home here is nice,” he said. “Just as a team, being able to not be in a hotel and stuff and be in our homes and stuff. So it’s exciting. It’s been a long break.”

In other news, winger Kyle Okposo, who left Tuesday’s practice with an undisclosed injury, did not skate this morning. In his spot at right wing beside center Cody Eakin, Dylan Cozens will be making his NHL debut tonight.