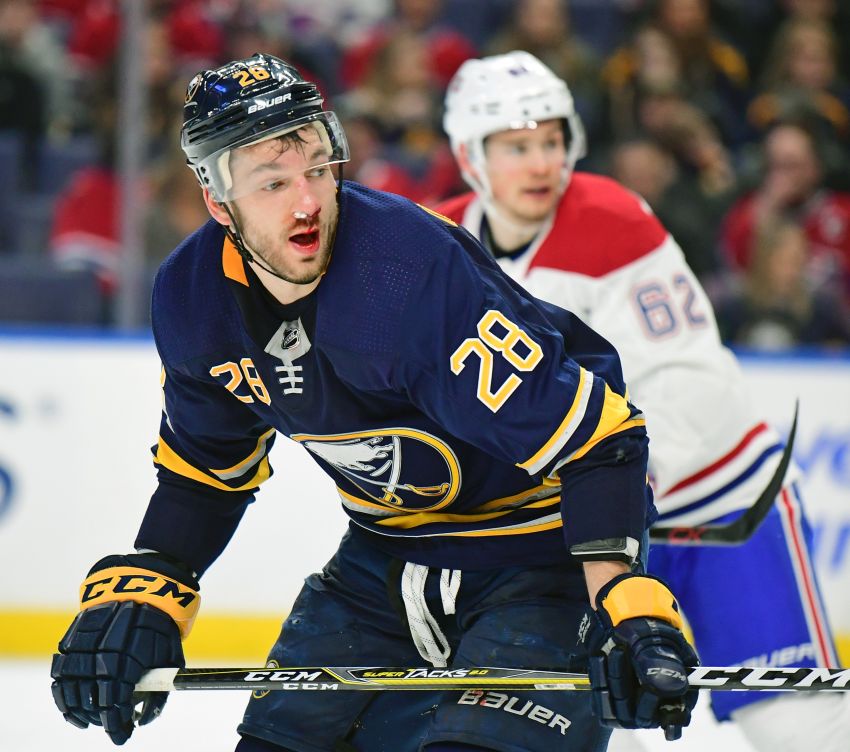 Zemgus Girgensons has experienced plenty of losing with the Sabres. ©2018, Hickling Images

BUFFALO – Way back on opening night, Oct. 5, the Sabres caused KeyBank Center to buzz with excitement for one of the few times in recent memory.

The Sabres’ new regime of coach Phil Housley, a Hall of Fame defenseman and Buffalo legend, and general manager Jason Botterill, who helped construct three Stanley Cup winners in Pittsburgh, had energized the fan base and offered hope.

Perhaps the Sabres wouldn’t make the playoffs in 2017-18, but they were expected to showcase a fast, exciting style while laying the groundwork for future seasons.

The Sabres lost the opener 3-2 to Montreal in a shootout, blowing a third-period lead. Two nights later, the Islanders throttled them 6-3 in New York. On Oct. 9, as New Jersey pummeled the Sabres 6-2 at home, it was clear they would be in for a long season.

The Sabres started 0-4-1 and went 3-7-2 in October, essentially falling out of contention before Halloween. They ended the year fittingly, losing their last four games, part of a 2-9-0 run.

This morning, the Sabres will hold their year-end meetings and close what is widely considered the worst season in franchise history.

The Sabres were downright awful, worthy of their status as the NHL’s worst team.

They earned only 62 points, 16 fewer than last year and the third-lowest full-season total in franchise history. They won just 11 home games, tying the full-season low set in 1971-72. They scored a league-low 198 goals and allowed a whopping 278.

That’s an NHL-worst minus-80 goal differential. No one else was below minus-65. The Sabres also scored a league-low 119 five-on-five goals.

In trading winger Evander Kane to San Jose on Feb. 26, Botterill said the Sabres had to make changes because “the group that we have right now is not working.”

Saturday’s 4-3 loss in Florida was almost certainly the final appearance in blue and gold for a slew of Sabres.

The Sabres don’t have one glaring weakness. They need help everywhere.

“We got to really evaluate everything that happened this year in all situations,” Housley told reporters in Florida. “I just feel that the one thing when I reflect at this point … is our even-strength scoring and the differential. We got to be a team that’s better defenders, we got to respect that. Our checking has to improve tremendously to give us a chance to win and realizing that OK, hey, it’s OK to win a game 2-1, 3-2.”

The Sabres sent eight players back to Rochester on Sunday, a massive talent infusion for the playoff-bound Americans. Heading back to the AHL are: forwards Nick Baptiste, Alexander Nylander and Kevin Porter; defensemen Brendan Guhle, Casey Nelson and Matt Tennyson; goalies Linus Ullmark and Adam Wilcox.

In his NHL debut Saturday, Wilcox, 25, stopped all 14 shots he faced after relieving starter Chad Johnson with the Sabres trailing 3-0 after the first period.

“I had to focus up there and kind calm my nerves, because I pretty nervous there,” Wilcox told reporters in Florida.

“I kind of had to (stop) myself from smiling throughout the game,” he said.

After stopping Mike Matheson’s shot during the second period, Wilcox could be seen grinning underneath his mask.

Wilcox became the 50th goalie to ever play for the Sabres.

“In sort of a dismal season, there’s something positive that comes out of it,” Housley said.