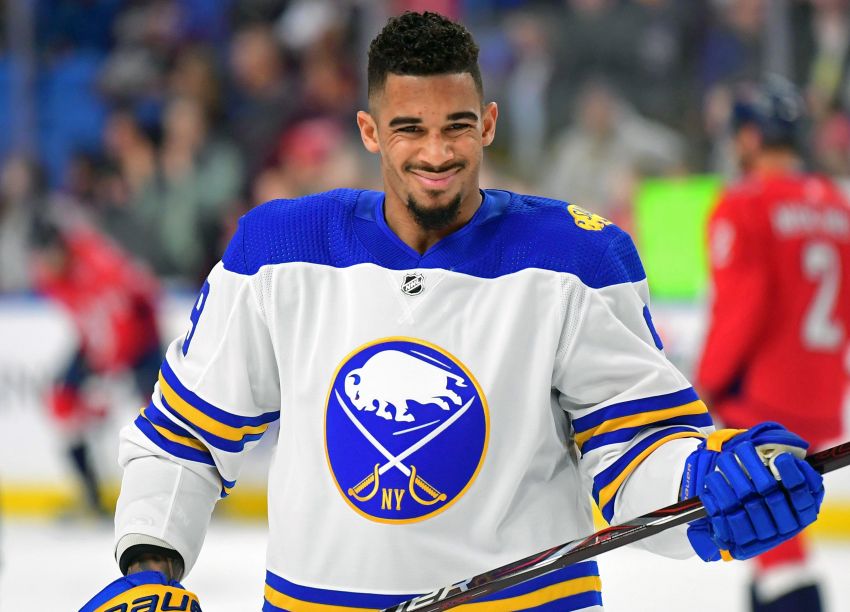 So why did Botterill trade Kane to the San Jose Sharks shortly before Monday’s 3 p.m. deadline for two conditional draft picks – one could become a first-rounder, although that seems unlikely – and a marginal prospect?

“As a result of where we are in the standings, we have to make changes to our organization,” Botterill said Monday inside KeyBank Center shortly after completing his only trade. “The group that we have right now is not working.”

“I’m not putting all the blame on Evander Kane,” Botterill said. “There’s a lot of blame to go around – coaching staff, management, players. We have to be better in certain situations.”

Fair or not, Kane, who joined the Sabres in a blockbuster trade with the Winnipeg Jets three years ago, has been perceived as a bad influence off the ice. Botterill said that wasn’t a problem. He said ownership had “zero” input on trading Kane.

So Botterill unloaded him. The market for rental players was weak, he said, although the Jets packaged a first-rounder to the St. Louis Blues in their deal for center Paul Stastny.

Kane, meanwhile, joined a Sharks team that ranks second in the Pacific Division with 74 points. Incredibly, he has never played in an NHL playoff game.

“This is a great opportunity,” Kane said on a conference call. “Excited probably doesn’t do it enough justice to how I feel. I’m looking forward to having the opportunity of possibly playing in the playoffs, and just hoping to add as much as I can to that group.”

Botterill’s group is bad, and he knows it. The rookie GM slammed a door Feb. 17 watching the Sabres’ feeble effort while losing a 4-2 afternoon home game to the Los Angeles Kings.

“I’ll be up front, the situation in the L.A. game, one of the biggest disappointments for me is our home record (9-18-4), it’s unacceptable,” he said. “I was looking at that game very closely.”

Then Botterill began speaking as passionately as he has during his 10 months as GM. He watched that contest so closely because the Sabres’ previous afternoon tilt Jan. 20 – he refers to early starts as “kid’s” games – the Dallas Stars stomped them 7-1.

The quick transformation of two teams this season gives Botterill some hope.

“The beauty of our league right now, it’s a very competitive league, but you can look at teams such as Colorado, such as New Jersey, that can make the adjustment really quickly,” he said. “But it’s going to be work for us.”