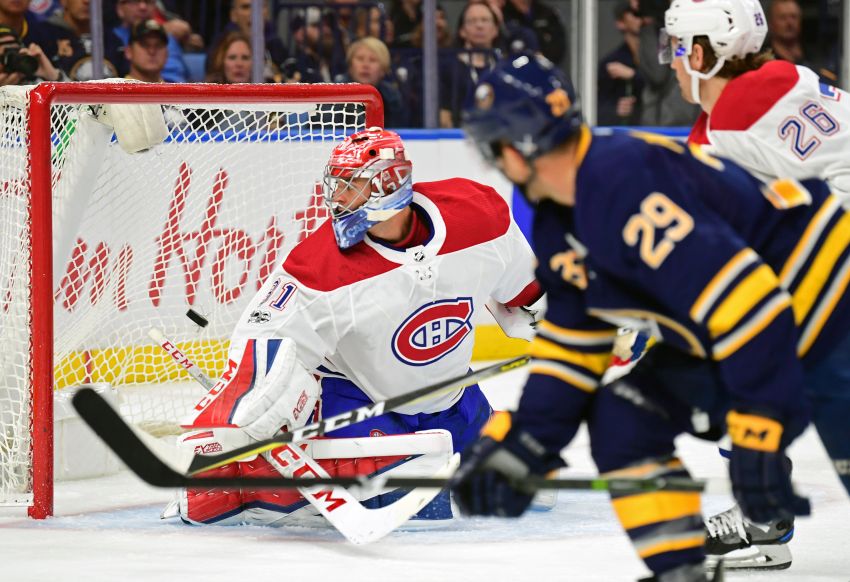 BUFFALO – It was shaping up to be one of those special nights in Sabreland that would be remembered for years.

In Phil Housley’s coaching debut Thursday, the Sabres showcased the fast, exciting style the Hall of Fame defenseman has been implementing, pumping shot after shot on goal. Veteran winger Jason Pominville, the former fan favorite the Sabres recently brought back, scored a power-play goal early on, igniting the capacity crowd of 19,070 fans.

After the Montreal Canadiens tied it, Pominville scored again 22 seconds into the second period, connecting on a nifty pass from Jack Eichel, the Sabres’ slick young center.

By the second period, the classic “Pominville Population” sign, a staple from his first run here, was hanging above Section 305 inside KeyBank Center with a “2” next to it.

But like so many times in recent seasons, the Sabres frittered away a third-period lead – “We just let our foot off the gas,” Eichel said – allowing Phillip Danault to score weak short-handed wraparound goal.

When Pominville went in the second round of the shootout, it seemed like fate was on the Sabres’ side in their season opener.

“I thought I had space,” Pominville said following the Sabres’ entertaining 3-2 loss.

Montreal’s Jonathan Drouin followed by slickly undressing goalie Robin Lehner with an array of quick moves before roofing a shot in. Then Price stopped Sam Reinhart to secure the victory.

“It’s no secret,” Lehner said of his ugly shootout performances. “I struggled last year with it. I’m trying to move forward with it. It takes some guts to get out of this hole in shootouts. I can’t pout about it. I’m working on it.”

Still, despite blowing a lead and losing, the Sabres seemed encouraged.

They played the aggressive style Housley brought with him from Nashville, looking nothing like the team that plodded through last season. Housley has been preaching a shot mentality, and they peppered 45 on Price, including 18 in the second period. Sabres winger Evander Kane has 11 shots, tying his career high.

“We outshot a team (by five), we outchanced a team,” Housley said. “We just didn’t beat them on the scoreboard. We liked the effort of our guys. Things were coming together. We took a step forward tonight.”

If the Sabres keep playing like they did most of Thursday, they’ll win some games.

“We’ve taken strides,” Pominville said. “Every day in practice (Housley wants) high pace, high tempo, wants us skating, wants us active, wants the D active. I think it’s a fun style to play for the players. It’s going to be a fun style for the fans to watch.”

Lehner added: “Mixed emotions. It’s pretty encouraging to see how we played out there. If we can keep playing like this, it’s going to work in our favor.”

At times, the Sabres’ speed gave the Canadiens fits.

“It kind of caught us by surprise at moments in the game,” said captain Max Pacioretty, who scored the Canadiens’ first goal.

The biggest surprise was Pominville’s performance. Yes, at 34 years old, he’s still a productive first-liner. But who expected two goals so quickly in first appearance with Buffalo since April 2, 2013?

“It was a pretty special moment from the (pregame) reception to the start, the first goal, the second goal,” Pominville said.

The second goal, a one-timer from the bottom of the left circle, illustrated why the Sabres gave Eichel an eight-year, $80 million contract extension Tuesday.

“He’s pretty crafty around the net, so he finds ways to get open,” Eichel said of Pominville. “At that specific moment, I kind of saw him (from the far boards) sneaking behind the net.”

Pominville, who scored his last goal with the Sabres on March 21, 2013 said: “Not many guys can make that kind of pass.”