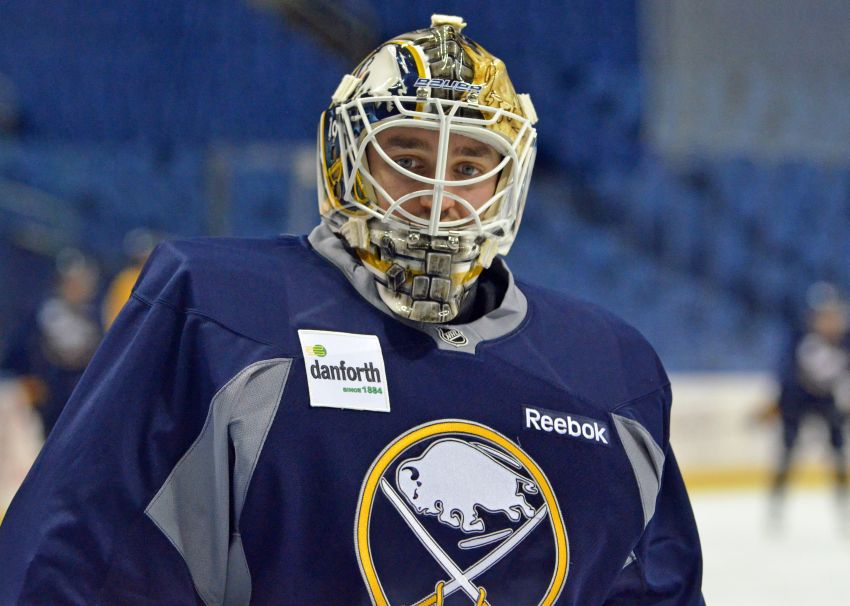 BUFFALO – So, who’s starting in goal for the winless Sabres against the Tampa Bay Lightning?

Still, Miller participated fully in the skate and Matt Hackett, the organization’s No. 3 goalie, has been sent back to Rochester after dressing Saturday.

“How did he look?” Rolston asked about Miller, who only skated briefly Monday. “Probably not as good as he did early on. But he’s getting there, I think.”

In other lineup news, Marcus Foligno (muscle strain) will make his season debut. Rolston put the winger back on the left side beside Tyler Ennis and Drew Stafford, reforming a trio that electrified late in 2011-12.

“We’re hoping that they create some energy and some scoring chances and get a little bit of the old magic that they had,” said Rolston, whose team had only two goals this season.

With Foligno back, the Sabres don’t have to make a roster move, Rolston said. Look for someone to be placed on injured reserve.

Rolston mixed most of his lines and defense tandems today, putting Steve Ott on the left wing with Cody Hodgson and Thomas Vanek.

“We’re trying to find some combinations where we have some sandpaper on lines,” Rolston said.

On defense, Mike Weber will move beside Tyler Myers, a first in their four years playing together.

“It’s a big honor to be able to play with him,” Weber said. “Mysie’s a great player. He’s a great skater, a great offensive mind, a big guy. It’s exciting for me to play with him tonight. To just try to make his night a little easier, just get him the puck and let him do his thing.”

Myers added: “The way he’s developed as a player it’s pretty unbelievable to see. He’s carried it into the first three games here. I’m very excited to be partnered with him.”

Rolston said the Sabres want more stable pairs, “especially against some of the higher-end forwards in the league.”