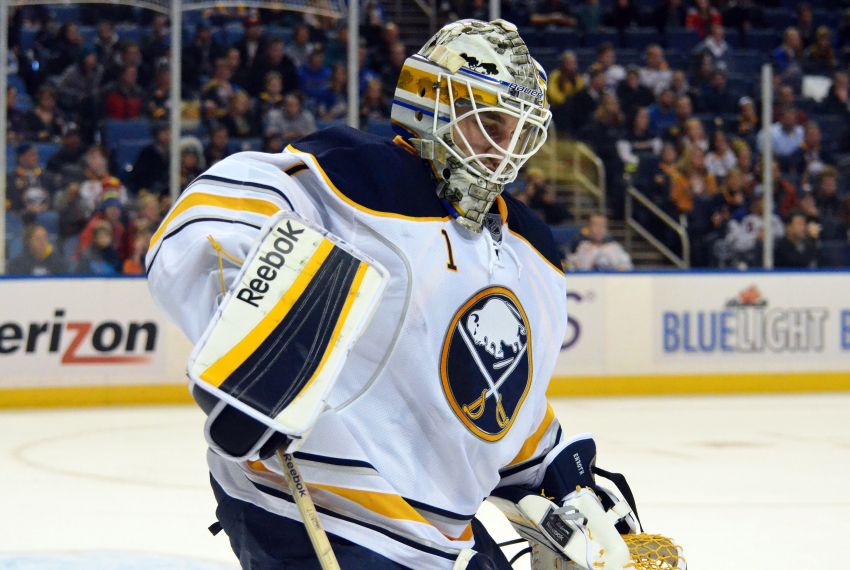 For the first time in their 43-year history, the Buffalo Sabres have started a season with three consecutive losses.

In Saturday’s setback, a 4-1 loss to the high-powered Penguins before 18,641 fans inside the Consol Energy Center, the Sabres’ goal drought went on the length of more than two full games before Thomas Vanek scored with 4:54 left in the contest.

“We have to figure it out real quick because these losses are piling up right away,” Hodgson said.

How do the Sabres, who will have today off, get out of this mess?

“You got to keep working,” Sabres coach Ron Rolston said. “That’s all you can do.”

Against one of the NHL’s elite clubs, the rebuilding Sabres generated little, sprinkling only 21 shots on Penguins goalie Marc-Andre Fleury.

Just like Friday’s 1-0 loss to Ottawa, a contest Ryan Miller made 45 stops, the Sabres wasted a superb goaltending effort.

Sabres backup Jhonas Enroth made several key stops in his first start this season, keeping the game from getting out of hand.

“Our goalies have stood on their head all three games, Millsie and Jhonas,” Sabres defenseman Mike Weber said. “It’s unfortunate we can’t be better in front of them to kind of limit some of their shots and their chances.”

Hours before Saturday’s game, Rolston, who trashed his team following Friday’s loss, talked about the need for the Sabres’ best players to show up.

“Our top six (forwards) have to be better,” Rolston said. “That’s what’s this league’s all about. They have to perform and they have to be your best players on a nightly basis. I know ours will rebound tonight.”

Sidney Crosby opened the scoring 3:39 into the game, potting his own rebound in front of Sabres defenseman Tyler Myers after Enroth stoned him.

“I definitely thought we controlled the game tonight,” Crosby said.

Chuck Kobasew made it 2-0 at 13:43, tipping in Brandon Sutter’s point shot in front of Sabres rookie Rasmus Ristolainen.

“I thought both of those were soft in front of our net,” Rolston said.

Chris Kunitz scored on a third-period penalty shot awarded after Weber hauled him down.

“It seems like early in the season the league has just decided here to award guys penalty shots,” Weber said. “That’s an on-ice decision from the referee, and we got to respect that. I’ve got to read the play a little better.”

“That’s one of the best plays I’ve ever seen anyone do,” Hodgson said. “It’s pretty unbelievable to pick it out of the air.”

At least the Sabres’ second goal was pretty.

Meanwhile, their power play is now zero of 13 this season.

“We’re trying a variety of things,” Hodgson said. “We’re shooting from up top, we’re taking it down low, shooting for rebounds, trying to jam in. But it seems like nothing’s going in. It’s frustrating.”