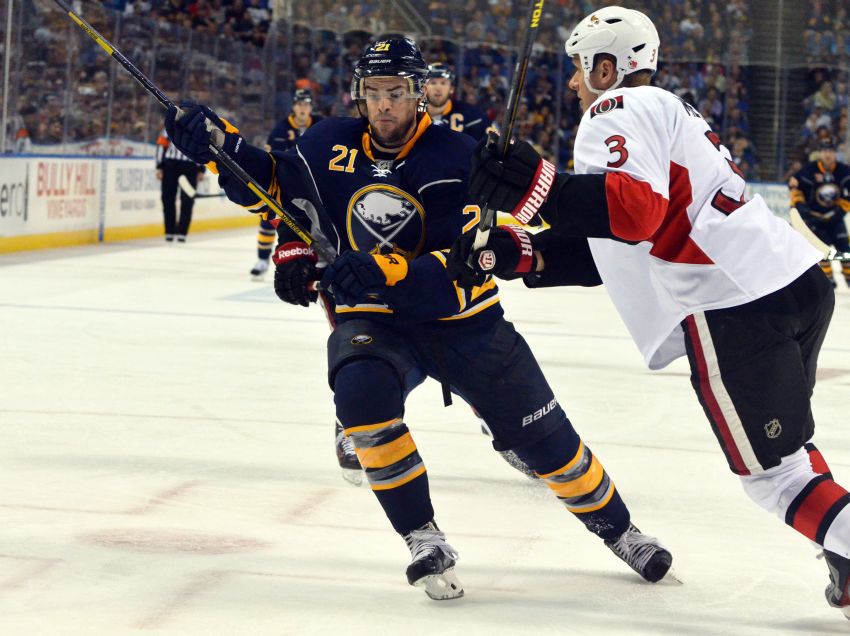 BUFFALO – This is a new era for the rebuilding Sabres, a struggling team featuring five rookies, three of them teenagers.

At one point during Monday’s long practice, the Sabres, who’ve done little right while losing their first three games, went through a pass-heavy drill.

Simply dishing the puck can be an arduous task these days.

“We need to get better there,” coach Ron Rolston said inside the First Niagara Center after the Sabres prepared for tonight’s tilt against the Tampa Bay Lightning. “That’s why we’re doing them. It’s hockey school stuff. But we need to get better with our hands.”

Other than goaltending, the Sabres need to improve everywhere, especially in the goal-scoring department.

They have just two scores – that’s .67 a game – an NHL low among teams that have played at least three games.

“Two goals is unacceptable,” said Sabres winger Drew Stafford, who has only four shots on goal despite averaging 18:41 on the ice through three appearances.

It’s still very early, but the Sabres could challenge their all-time low for goals in a full season – 190 by the wretched 2002-03 club – this year. Their power play is a league-worst zero of 13.

So six days into the season, the growing pains many believed the youthful Sabres would experience appear more severe than expected.

“That just comes with territory,” Stafford said. “You look at some of the experience we do have, in some way it should balance it out. … You got some teenagers in here that are playing with a pretty big load on their shoulders right now with people expecting them to step in just seamlessly.

Right now, however, Rolston’s not fretting about earning that first win; he’s worrying “about the process of winning.”

“We have to get to that point before we worry about the rest,” Rolston said. “We’ve got to have a process of playing well period to period. The results are going to come with the process. But if the process isn’t there, you’re not going to have results.”

In years past, he said, too many highs and lows accompanied the Sabres’ wins and losses. Now, they’re “just trying to keep an even keel.”

“It leaves a bad taste in your mouth starting the way we did,” Stafford said. “You have to take whatever positives you can out of the games and continue to build and continue to get better because as soon as you start to let some of that negativity creep in, it’s only going to bring you down.”

Rolston added: “I like where we’re at in the room, yeah. … I’ve liked our younger guys so far, where they’re moving, and I like the vets’ attitude. It’s been real good so far.”

Sabres goalie Ryan Miller, who could return from a groin injury tonight, has seen a team performing a little timidly.

“It just comes with getting a little confidence,” Miller said. “With a young team sometimes you just kind of need to build toward that. I think that this group of guys, we build that confidence, we’ll be moving the puck, doing the things we need to do.

“I don’t doubt we’ll be playing the way we need to play. It’ll be a little bit of a process here, and we’re trying to keep the young guys in the right place mentally and also trying to go out there and take charge.”

So far, no one has taken charge. Stafford said the Sabres are “not quite there yet.” Once they start performing better in their own zone – “more communication, making sure everyone’s on the same page,” he said – they’ll generate more offense.

“We’ve been stuck in our own end against some pretty good teams,” Stafford said. “I don’t want to use that as an excuse just because we’re playing these teams that have some of the best players in the league, it goes for every night, every team we play against. We have to make sure that we’re solid with our support and communication and everything else will go from there.”