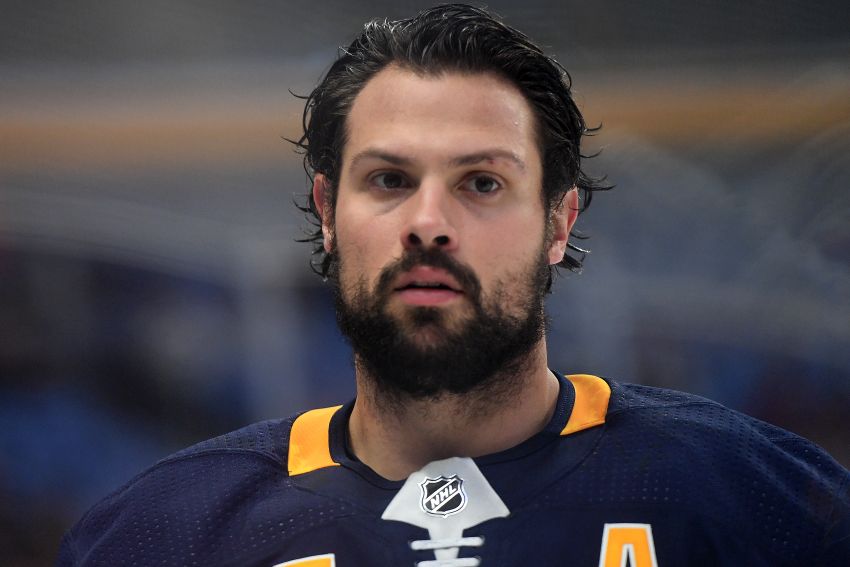 “Those first two games he was our best defenseman,” Housley said prior to Friday’s 5-4 overtime loss to the Carolina Hurricanes inside KeyBank Center.

But after those outings earlier this month, Bogosian experienced a normal dip returning from his lower-body injury.

“The adrenaline’s not there, now you’re in the game mode and getting prepared, you’re playing the game,” Housley said.

In recent games, however, Bogosian has started seeing signs he has recaptured his regular form. He skated a season-high 22 minutes, one second in Thursday’s 2-1 loss in Philadelphia, his seventh game.

“Anytime you miss that much time you’re going to be rusty,” said Bogosian, who was injured late in the Sept. 29 preseason finale. “I think the last few games I’ve tried to make some plays I normally could’ve if (I was in) the start of the season or midseason form. I’m starting to make those passes and see those reads.

“That’s always nice when you kind of get into a groove that way, too.”

Bogosian said he has also put the injury in the back of his head, perhaps the biggest indicator he has turned a corner.

“I’m not going to say it’s completely over with or I’m not thinking of it, but you try your best to go out and play the game as hard as you can, as hard as your body will allow you to,” he said. “(Thursday) I wasn’t really thinking about it too much, so that’s a good sign.”

Even at 34, former Sabres winger Matt Moulson figured to be productive in the AHL, a league he hadn’t played in since 2008-09 before last week.

Well, after a four-assist outing Wednesday, Moulson has already compiled seven points (all assists) in three games with the Ontario Reign.

Remember, Moulson had zero points in 14 contests with Sabres earlier this season. They waived the three-time 30-goal scorer Dec. 4 and sent him to the Reign, the Los Angeles Kings’ AHL affiliate in California.

“You look at his start in the AHL already, hopefully this jumpstarts his getting back to the National Hockey League,” Sabres general manager Jason Botterill said. “It was a difficult conversation, but it was just a situation that we had to make some adjustments to our team, where we were at.”

The Sabres sent Moulson to Ontario so their AHL prospects with the Rochester Americans wouldn’t lose playing time. Moulson is in the fourth season of a five-year, $25 million contract.

“He’s been a complete player,” he said. “I really like his aggressive play, finishing checks, keeping the other team off guard. He’s getting in on the forecheck, he’s making a difference.”