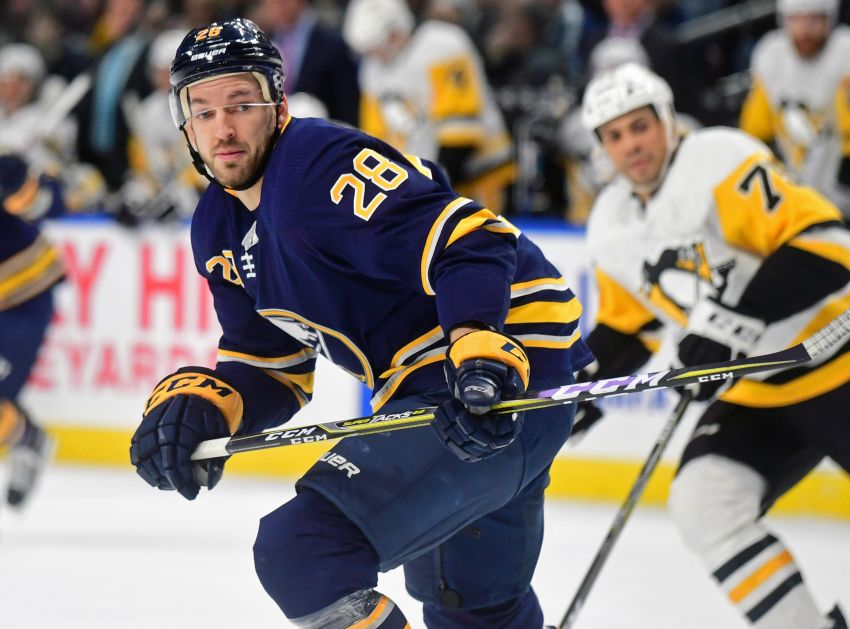 “I definitely remember that more than I scored a goal,” Girgensons said Friday prior to his 300th NHL game.

Since his 15-goal season, Girgensons has scored 15 goals in 169 contests.

After going pointless again in Friday’s 4-0 loss to the Pittsburgh Penguins, Girgensons has a career-long 18-game point drought. He hadn’t recorded one since scoring his only goal this season Oct. 14.

Girgensons played left wing Friday beside center Johan Larsson and Matt Moulson, a fourth line that has combined for two goals and seven points this season.

Twenty-six games into the season, the Sabres’ six regular defensemen finally played together.

Zach Bogosian, out since suffering a lower-body injury Sept. 29, made his season debut, skating beside Nathan Beaulieu. Bogosian hadn’t played since the preseason finale.

With Bogosian, 27, the Sabres have a second right-handed defender. Rasmus Ristolainen had been the only righty recently.

With Bogosian back, the Sabres scratched defenseman Justin Falk.

Notes: Defenseman Matt Tennyson cleared waivers Friday and was sent to the AHL. Tennyson, a regular with the Sabres earlier this season, played for the Rochester Americans hours after his assignment. … The Sabres also scratched defenseman Josh Gorges. … The Sabres sent goalie Linus Ullmark, who practiced Thursday to give Robin Lehner a rest, back to the Amerks on Friday.