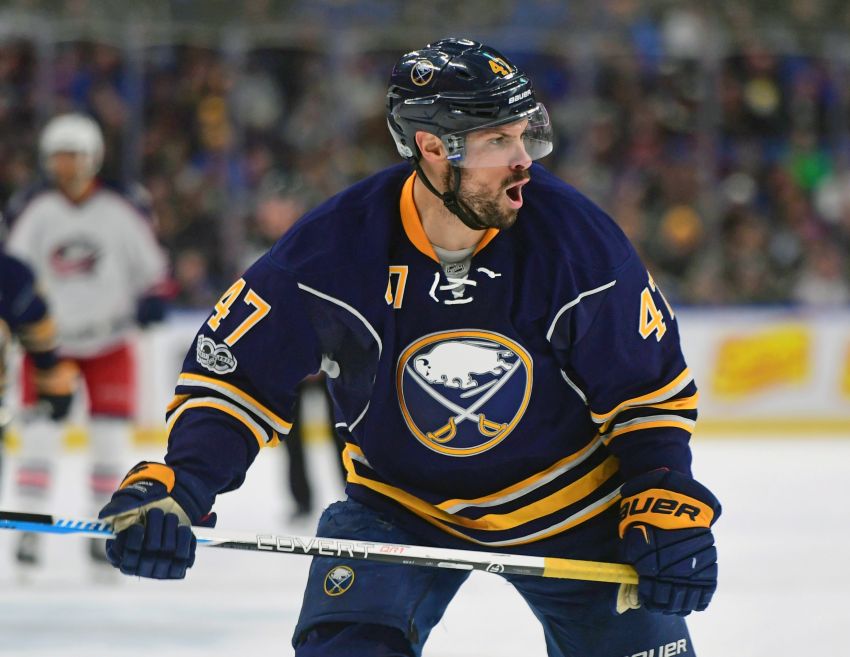 BUFFALO – It can be argued no one was more excited about Phil Housley taking over the Sabres than defenseman Zach Bogosian.

Then Bogosian said he “just felt a tweak” in the third period of the preseason finale Sept. 29. The Massena native hasn’t played since suffering the lower-body injury.

“I get through training camp and preseason and feel really good, like where my game’s going and the last period of the last preseason game it happened,” Bogosian said this morning after skating with his teammates for the first time since getting injured.

Right now, four are sidelined, including top minute-muncher Rasmus Ristolainen, who pronounced himself ready to play after skating this morning inside KeyBank Center.

Why has Bogosian, 27, been out so long? He said he re-aggravated his injury, most likely a groin problem, trying to return.

“I just tried to be smart about the second time around,” he said. “It seems like I’ve turned the corner.”

Bogosian, of course, still needs to participate in some team practices. Only a handful of Sabres skated before tonight’s tilt against the Minnesota Wild.

Naturally, sitting out has been difficult for Bogosian, who has battled injuries over the years. He missed 26 games last season and 18 contests in 2015-16.

He added: “I tried to stick around the room and go through what everyone in that room’s going through, go through it as a group.”

“He’s getting really close,” Housley said. “We just want to be cautious. We don’t want to throw him in a situation where we have short-term success versus long-term success. He’s a really tough competitor, he wants to get back in the lineup.”

Ristolainen said a hit and a shot injured him late Nov. 2 in Arizona.

He added: “I told everyone I’m ready, it’s up to them when I will be back.”

In other news, Housley said center Jacob Josefson, out the last 15 games with an ankle injury, will return tonight. Goalie Chad Johnson will likely start, his 10th appearance this season.