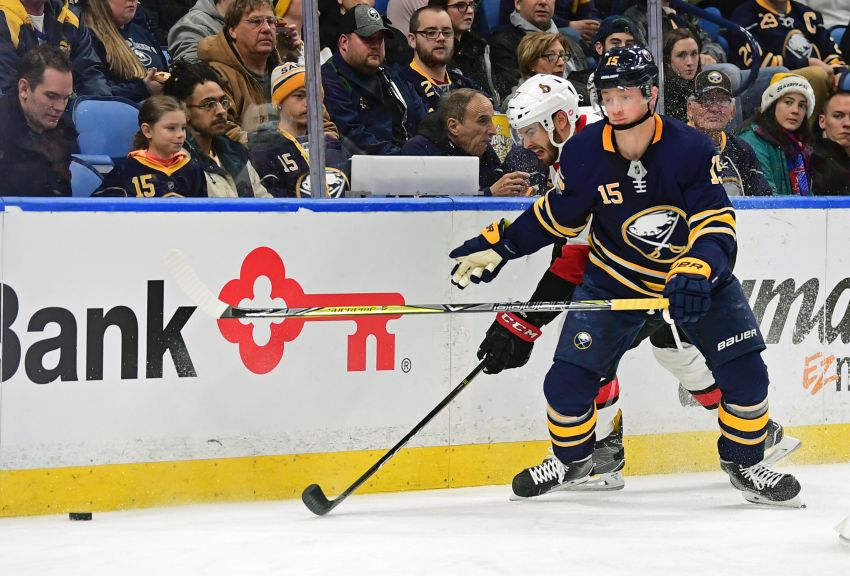 BUFFALO – The first hat trick of Jack Eichel’s short career and the first witnessed by Sabres fans here since 2011 deserved to be celebrated wildly.

A night after registering zero shots on goal, Sabres coach Phil Housley said “something must’ve been triggered” in Eichel.

“He started shooting the puck, even coming down off a bad angle,” Housley said following the Sabres’ 5-4 overtime loss.

Eichel was flying Friday, at his best while pumping a career-high 11 shots on goal and enjoying his second four-point night.

But the Sabres wasted the 21-year-old’s most dynamic NHL performance. The first hat trick by a hometown player at KeyBank Center since Thomas Vanek’s on April 5, 2011 against Tampa Bay couldn’t buoy them.

“I’m surprised it’s been that long,” said Sabres winger Jason Pominville, who played in that game.

“It’s a tough one,” he said. “We did a pretty good job to get the momentum back to after they scored twice.”

What was working for Eichel on Friday?

“I felt good, like I had jump,” he said. “I was trying to use my speed, shoot the puck and create for our team.”

Housley said: “He was just using his speed, especially through the neutral zone.”

Eichel tied the game at 1 on a rebound in close 10:46 into the second period before assisting on defenseman Jake McCabe’s go-ahead goal 1:50 into the third.

“We wanted to … throw as many pucks to the net and that’s what happens,” Housley said. “You look at his first goal, we throw a puck to the net, he just gets a rebound.”

Following three quick Carolina goals, Eichel’s wicked wrist shot from the top of the slot beat goalie Cam Ward at 9:24. Ten seconds later, Eichel skated through the slot before roofing a shot in from the right circle.

“Jack took matters into his own hands a little bit in the third and found a way to tie the game,” Housley said.

Kane said: “When you shoot, you give yourself an opportunity to score. He made them count tonight.”

For the first time in 245 games, according to the team’s broadcast, fans could toss their hats on the ice and enjoy a scintillating performance.

Still, even with the announced crowd of 17,610 roaring – fans had to brave a snowstorm battering the area – the Sabres couldn’t finish off the Hurricanes.

“It’s not good enough to get a point,” Eichel said. “It seems like it’s been the reoccurring theme here of late. We’ve had good effort and put ourselves in games and (had) opportunities to win and we’re coming out with overtime losses.”

The Sabres are 2-1-3 in their last six games. Incredibly, they’re 1-6 in overtime this trying season.

“It’s tough to lose in overtime,” Housley said. “This has been a continuing story, we tried to change up the lines, tried to give it something different because it hasn’t worked.”

For Housley, whose team lost 2-1 Thursday in Philadelphia and finished a stretch of five games in eight days, the late comeback was notable.

“I hand it to our guys to find the energy to come back and tie the game,” Housley said. “I thought it was a great effort on their part because it easily could’ve gone in the other direction. For the most part we played a really, really good game.

“It’s just those little details, and I continue to talk about it, our play without the puck. It’s that urgency that something bad could happen, and it did.”

Eichel scored his last hat trick before Friday on Nov. 15, 2013 with the U.S. National Development Team, a junior squad in the United States Hockey League.