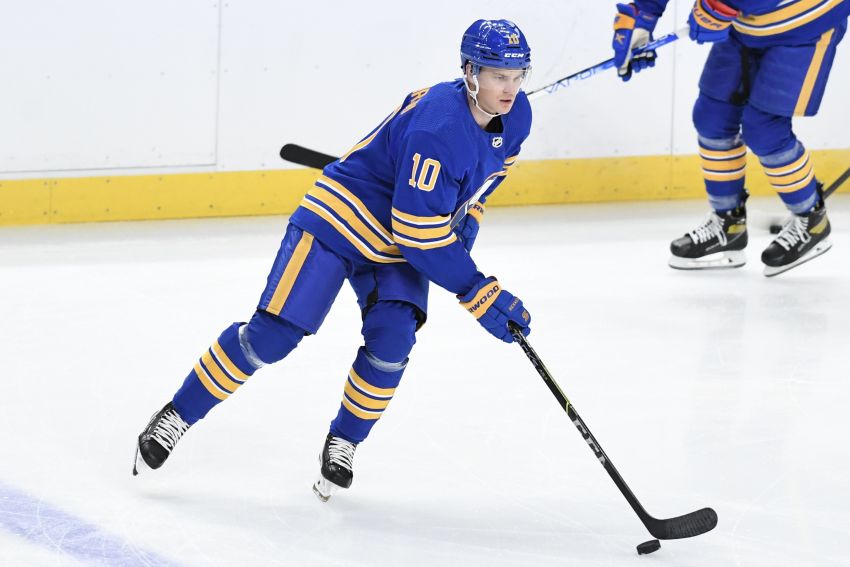 Instead of laying back, Jokiharju, 22, could finally attack. After struggling for months under ex-coach Ralph Krueger, the Finn recaptured the steady form he showcased in 2019-20.

“It was way easier to play,” Jokiharju said Wednesday inside KeyBank Center. “You play the hockey, just go out there. You weren’t just passive or falling back. I felt like that was huge for my game. Just skating forward, getting good gaps out there. The game flow was so much different. You get pucks more. You just felt way better.”

Jokiharju’s strong finish – his ice time increased by more than five minutes some games – helped him earn a three-year, $7.5 million contract on Sept. 2. The Sabres’ commitment illustrates they view him as one of their building blocks.

Having traded Rasmus Ristolainen and lost Jake McCabe in free agency and Will Borgen in the NHL Expansion Draft, the blue line looks radically different than it did just a few months ago.

Ristolainen, a fellow Finn, took Jokiharju under his wing before the Sabres dealt him to the Philadelphia Flyers on July 23.

“It was kind of expected to come,” Jokiharju said of the Sabres trading Ristolainen. “I was actually happy for him. I felt that he wanted change.”

Those changes have created opportunities for the Sabres’ young defense core. Jokiharju, for example, could become a first-pair defender. Through the first week of training camp, he has been skating beside Rasmus Dahlin again.

“I want to take more steps forward,” said Jokiharju, who could make his preseason debut in tonight’s road game against the Detroit Red Wings. “So I’m not happy that (Ristolainen) left or something like that. But I feel there’s more minutes available right now.”

Jokiharju will likely spend those minutes with Dahlin, his partner since Granato took over. Like Jokiharju, Dahlin, 21, struggled for months before Granato put them together.

Dahlin, whose puck-moving skills can be dynamic, is the freewheeling presence. Jokiharju, meanwhile, can serve as an anchor of sorts.

“Joki, I would say, is a little bit more conservative by nature and we know that Dahls is the opposite by nature as far as how they play and the style of play,” Granato said. “Yeah, I did feel that Joki would look after Dahls in certain situations and vice versa, in different ways. I thought they were a very complementary pair.”

He added: “Both have a deep care about their team and their responsibilities.”

“Talk is a big thing,” Jokiharju said. “I feel that we go in the locker room, we talk things out, ‘How can we do better?’ … We watch some video. So I think that helps a lot.”

Dahlin said he and Jokiharju “have a great relationship off the ice.”

Sabres defenseman Jimmy Schuldt, who missed the first week of camp for an undisclosed reason, practiced on Wednesday.