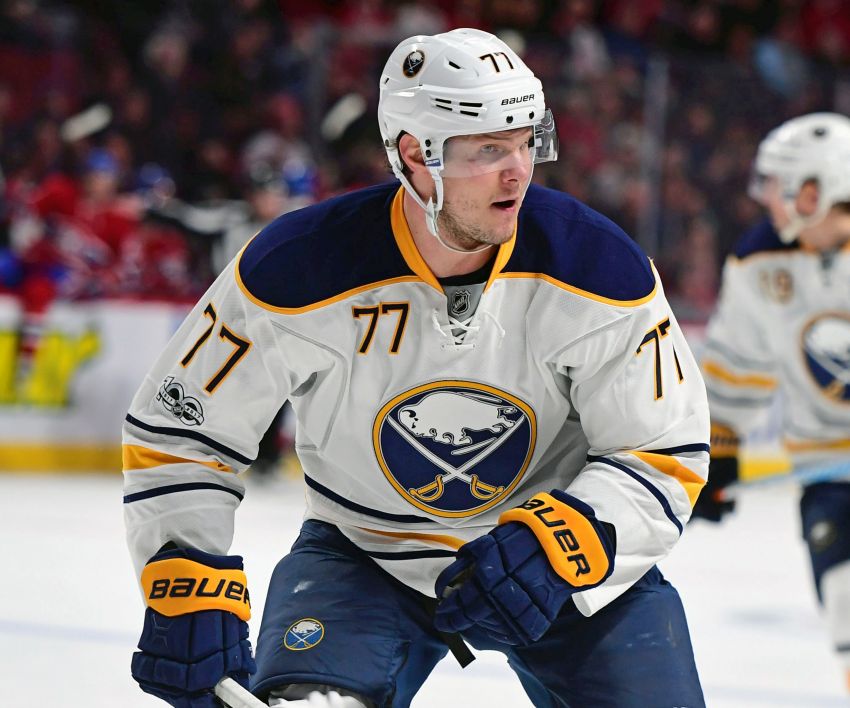 “Right where it should be, and it’s a goal,” he said Wednesday during his end-of-season news conference inside KeyBank Center.

Minutes later, Kulikov showcased the wicked shot Murray coveted when he acquired the Russian from Florida on June 25.

“He gets the puck and a one-timer, which is his shot that I’ve seen in the past right back to junior, where he catches the goalie against the grain and scores,” Murray said. “That’s the Dmitry I made the trade for. That’s what I saw visions of before I traded for him.”

The Kulikov he traded for – the aggressive, puck-moving defender with offensive upside – rarely materialized. Those plays in the Sabres’ 5-2 win against Toronto, incredibly, doubled Kulikov’s goal and point output for the season.

It was his 40th appearance.

While Kulikov, 26, came on a bit late, his first and probably only campaign with the Sabres was mostly a disaster.

But Kulikov likely struggled for a reason. In his preseason debut Sept. 30, he was knocked into an open bench door. The lower-back bruise he suffered dogged him all year, severely limiting his effectiveness and forcing him to sit out for stretches.

“That’s the disappointing thing,” Murray said. “You can say injuries aren’t an excuse, but he gets exploded in an open door (in the) preseason.”

When an upper-body injury sidelined Kulikov nine games over 20 days in March, he finally healed enough to recapture some of his old form, Sabres coach Dan Bylsma said recently.

Still, it appears unlikely Kulikov, an unrestricted free agent, will return next season.

“It didn’t work out,” Murray said. “You can say that’s a bad trade, I’ll agree with you. But I don’t blame him. I blame the circumstance and I’ll take the rest of the blame.”

Kulikov compiled two goals, five points and a team-worst minus-26 rating in 47 games.

After making only 12 NHL appearances over his first four pro seasons, defenseman Taylor Fedun earned a 25-game look from the Sabres in 2016-17.

“I was able to establish that I could play at this level and be an effective player at this level,” Fedun said Monday as the Sabres held their end-of-season meetings.

Fedun, 28, compiled seven assists, showcasing some of the offensive prowess that has helped him pile up points in the AHL. He also had five goals and 23 points in 29 games with the Rochester Americans this season.

“It’s pretty frustrating, because those opportunities to get up there and play at this level are ones that I’ve really been working toward for a lot of years now,” Fedun said.

Fedun said he was injured when his toe dragged in the Sabres’ 2-1 shootout win in Anaheim. He recently resumed skating.

Naturally, Fedun sees a fit with the Sabres, his fourth organization in four years.

“Being mobile and moving pucks well, using my brain, I think is something that seemed to fit in well here,” he said.

He added: “The opportunity I got here was something I’ve been searching for for a number of years now. I’d really like to pick up where I left off.”

Sabres prospect Cal Petersen, one of the NCAA’s best goalies with Notre Dame, has been selected for Team USA’s entry at the upcoming World Championship.