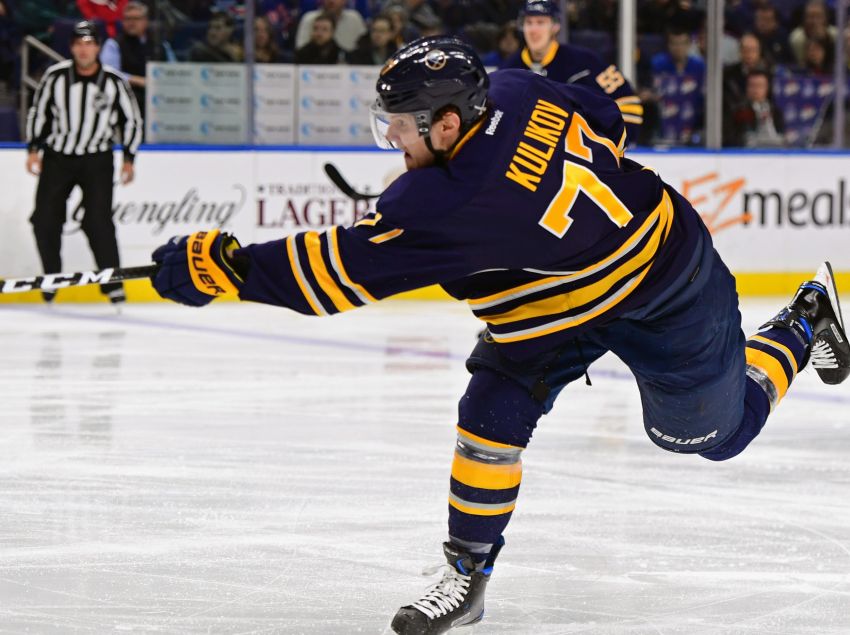 Kulikov has dealt with the pain through a daily treatment regimen, and Thursday’s 2-1 overtime loss against New York Rangers was his fourth straight appearance.

“For old people, you get out of bed, you’re kind of stiff,” he said Thursday morning inside KeyBank Center. “So it’s just a little stiffer for me, I would say, when I get out of bed nowadays. I need to make sure I do stuff to have myself ready for the game.”

The Sabres acquired Kulikov from Florida on June 25 to be top defenseman Rasmus Ristolainen’s regular partner. But the former first-round pick, an upcoming unrestricted free agent, has been limited to 24 games.

Still, the Sabres, who dished defenseman Mark Pysyk and exchanged picks for Kulikov, have finally started seeing some return. In his first three games back, Kulikov skated big minutes – 24:11, 25:32 and 22:47 – beside Ristolainen. He scored his first goal late in Tuesday’s 5-2 loss in Montreal. Overall, he has two points and a minus-8 rating.

Nick Deslauriers, center? Believe it. For Thursday at least, the defenseman-turned-winger pivoted the Sabres’ fourth line.

To make room for Deslauriers, a healthy scratch for two games, center Cal O’Reilly was scratched and then waived. If O’Reilly clears – he has a one-way, $700,000 contract, so odds are he will – the veteran will likely be assigned back to the Rochester Americans.

The Sabres have received an alarming lack of production from their fourth-line centers. O’Reilly had only one assist in 11 games, although he scored the shootout winner Nov. 19. Derek Grant contributed just three assists in 35 games before the Sabres lost him on waivers to Nashville.

Deslauriers, who had William Carrier and Tyler Ennis as his wingers, has zero points in 24 games. He played just two minutes, 46 seconds Thursday.

Wheatfield’s Adam Clendening was a healthy scratch for the Rangers. The defenseman has one goal and eight points in 18 games this season.

One thought on “Overcoming back injury tough for Sabres’ Dmitry Kulikov”