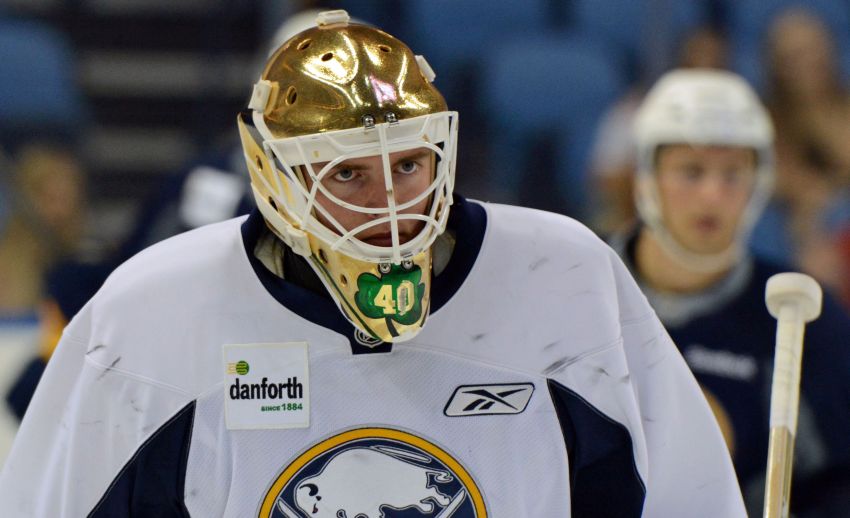 BUFFALO – As the game ticked toward a record length and the shot count grew higher and higher, Cal Petersen’s Notre Dame teammates joked they wanted the goalie to shatter the NCAA single-game saves mark.

“They wanted me to hit the century mark,” the Sabres prospect recalled earlier this month about his record-setting 87-save performance in the Fighting Irish’s 4-3, five-overtime loss March 6. “But they didn’t know if the scoreboard went that high.”

Petersen, 20, didn’t know what was happening that night before UMass scored 11:42 into the fifth session, ending the longest game in NCAA history after more than 151 minutes. The freshman said he was too caught up in the game, “which got more and more weird” as it dragged on, to understand its significance.

“It was just kind of a cool experience,” Petersen, the 182nd pick in 2013, said following a session of development camp at the First Niagara Center. “You’re obviously trying to win the hockey game, stuff like that. But you also realize you’re going to be a part of something that was a little bit bigger than kind of just a hockey game.”

When the home game finally ended the next morning, everyone was spent.

“Our team grinded ‘til 2 a.m.,” said Sabres prospect Connor Hurley, a Notre Dame center. “He’s sitting back there stopping every single puck. It was just amazing to see. My legs were gassed. People were still there ‘til 2 a.m., like a full crowd, so it was just a crazy experience. I’m glad I got to be involved in that game.”

“It wasn’t like he was facing breakaways and two-on-ones, but he certainly had to stay mentally engaged for an extended period of time,” Jackson said.

Incredibly, Notre Dame had another Hockey East home playoff tilt against UMass that night. Players ate dinner right after the game and were able to sleep in.

“Our trainers were really on top of things,” Petersen said.

Notre Dame won the next two nights – Petersen finished off UMass with a 23-save shutout – before losing a three-game series to UMass-Lowell the next week.

Petersen “was exhausted mentally and physically” by then, Jackson said.

“Kind of like a balloon letting go of the air,” he said. “I think he was spent. If you count minutes played, he basically played like nine games in a matter of seven days.”

Still, Petersen had cemented his status as Notre Dame’s No. 1 goalie, a role he earned about halfway through 2014-15.

“I wasn’t guaranteed anything going in,” said Petersen, a lefty. “I was guaranteed if I came in and worked hard there would be an opportunity to play right away. I think as a goaltender that’s how I want it. It’s a battle from the beginning. I’m glad that I was able to get a majority of the games.”

Jackson said Petersen will begin next season as his starter. He sees pro potential in the Iowan, one of about five young goalies the Sabres have drafted or acquired in the last few years.

“I certainly think he’s got those capabilities,” Jackson said. “I think when I saw him last year in January, February, he showed me that certainly he can play at that level. The biggest thing for him, as much as he’s mature as a young man, he needs to mature as a goaltender, just to learn consistency.”

“Obviously, the organization has provided the right opportunities to be able to make the step,” he said about the Sabres. “(General manager Tim Murray has) made it clear it’s whoever steps up and in camps like this and in their seasons that are the ones that are going to get the shots.”