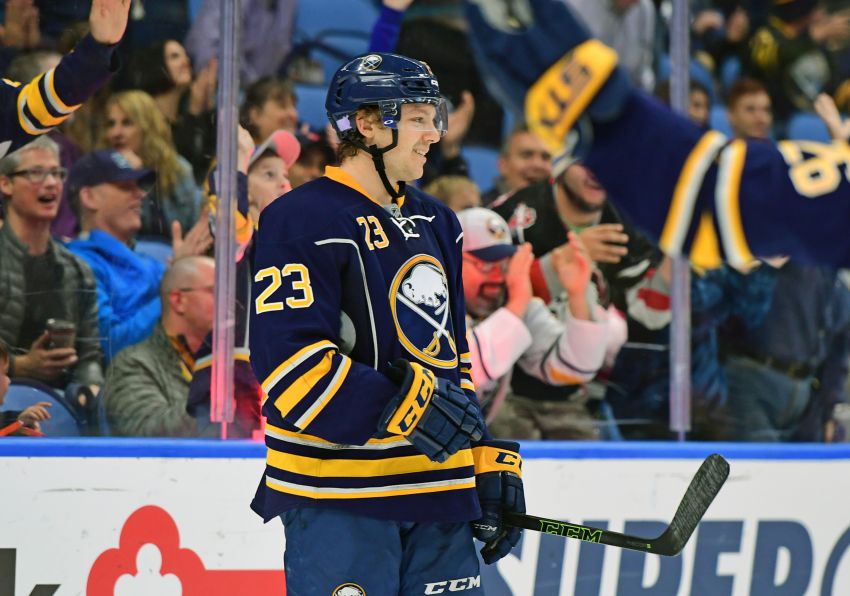 BUFFALO – As the seven-game mark approached, Sabres forward Sam Reinhart figured after all his missed opportunities, his first goal would be fluky.

“The way the year has been going, that’s the way the first one had to go in, because the chances have been there,” Reinhart said after scoring a power-play goal late in Saturday afternoon’s 3-0 win against the Florida Panthers inside KeyBank Center.

Sure enough, 8:48 into the third period, Reinhart tried to find Kyle Okposo from behind the net. But the puck hit Florida defenseman Mark Pysyk’s skate and slid past goalie Roberto Luongo.

Reinhart, 20, looked relieved as his teammates mobbed him.

“Sam’s kind of returned to a form to where he’s been good at around the net and at the net front,” Sabres coach Dan Bylsma said.

“I’ve been around the net,” Reinhart said. “I think I just have to bear down a little more.”

The Sabres play in Winnipeg at 3 p.m. today, the first of a league-high 19 back-to-back games this season. Usually they only travel a short distance within the Eastern Conference for consecutive games. Winnipeg is about a 1,000-mile flight.

“I feel better about it,” he said. “It’s a 1 o’clock game. We’ll get into Winnipeg at a reasonable time. It’s not like we’re going to get there at 3 in the morning and figure how to sleep for three or four hours, get up and play again. We’ll get there in a reasonable amount of time and have a good night’s sleep.”

With goalie Robin Lehner recovered from his stomach bug, the Sabres sent Linus Ullmark back to the Rochester Americans on Saturday.

Notes: Sabres winger Nick Deslauriers left the game late and was being examined before the team flew to Winnipeg. Bylsma said a forward might need to be recalled. Update: The Sabres have recalled rookie winger Nick Baptiste, who scored twice for the Amerks on Saturday. Baptiste, 21, played his first two NHL games earlier this month, scoring one goal. … The Sabres scratched rookie defenseman Casey Nelson for the sixth straight game. …The NHL honored linesman Tim Nowak, a Buffalo native, for officiating his 1,500th game. … Bylsma on 44-year-old Panthers star Jaromir Jagr: “Seems to defy any reference to age. (He’s) still a dangerous and effective player.” … The Sabres’ power play has scored in five of the seven games.