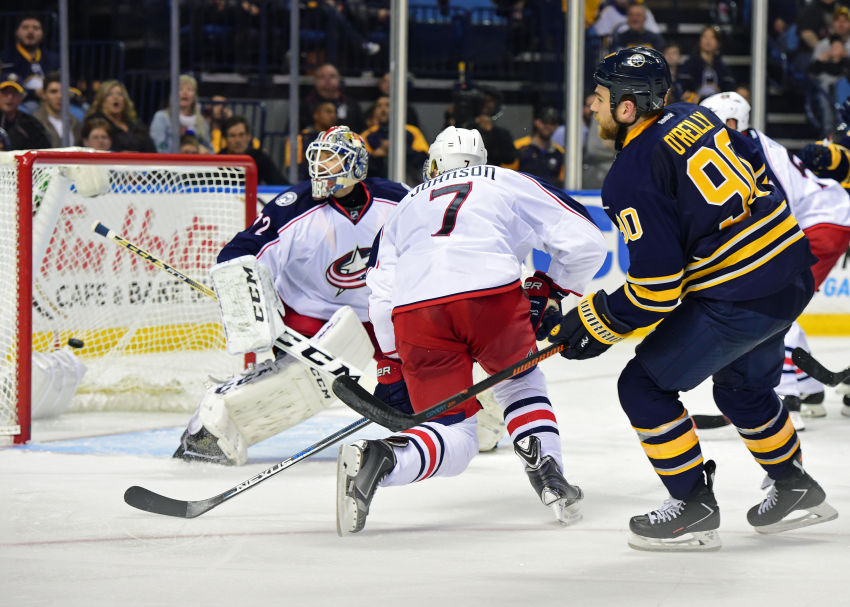 BUFFALO – Three games into the season, Ryan O’Reilly, the shiny acquisition the Sabres recently awarded a seven-year, $52.5 million contract extension and touted as their No. 1 center, has already been shifted to the left wing.

In an attempt to ignite his struggling top line Monday afternoon, Sabres coach Dan Bylsma moved Zemgus Girgensons to center between O’Reilly and Tyler Ennis for the Sabres’ 4-2 win against the Columbus Blue Jackets inside the First Niagara Center.

O’Reilly, who called himself “useless” in Thursday’s season-opening loss, responded with his strongest game and his first goal.

“If that’s because he moved to the wing, I don’t know,” Bylsma said.

O’Reilly had two power-play points – a goal from the left circle and an assist – won a game-high 11 faceoffs (in 17 attempts) and pumped five shots on net while skating 20 minutes, 35 seconds. He began the game with three shots.

“I thought my energy was a lot better and (I was) a little more creative,” O’Reilly said.

Creativity is a must for O’Reilly.

“I felt like I was getting the puck and whether there was someone there or not, I made something out of it,” he said. “I think that’s something I have to do as, I think, a person responsible for creating offense on this team. (The) first two games didn’t really generate anything.”

“I thought that again was probably his best game,” Bylsma said about Girgensons. “He’s carrying the puck through the middle of the ice, plays hard all over the ice, played hard down low. … I thought that line was significantly better than game two because of him being at center.”

O’Reilly has played the wing before, including all of 2013-14 with the Colorado Avalanche and during Team Canada’s run to the gold medal at the world championship in the spring.

“As long as we win, I don’t care, I’ll play wherever,” O’Reilly said. “It’s a little different. It took a couple of shifts to kind of get used to. I was out of position a couple times, but once I got used to it, Z and Ennis played a great game.”

The Sabres recalled Jake McCabe from the Rochester Americans prior to the game, and the defenseman made his season debut on his 22nd birthday. He played 12 minutes, 22 seconds, mostly beside Mark Pysyk.

To make room, the Sabres made defenseman Carlo Colaiacovo a healthy scratch. Defenseman Matt Donovan also skated in the pregame warm-up again before getting scratched.

New update: The Sabres have waived Donovan, according to CBC’s Tim Wharnsby, likely so he can join Rochester. Donovan has sat all three games.

Guhle, who suffered an upper-body injury, returned to practice Sunday.