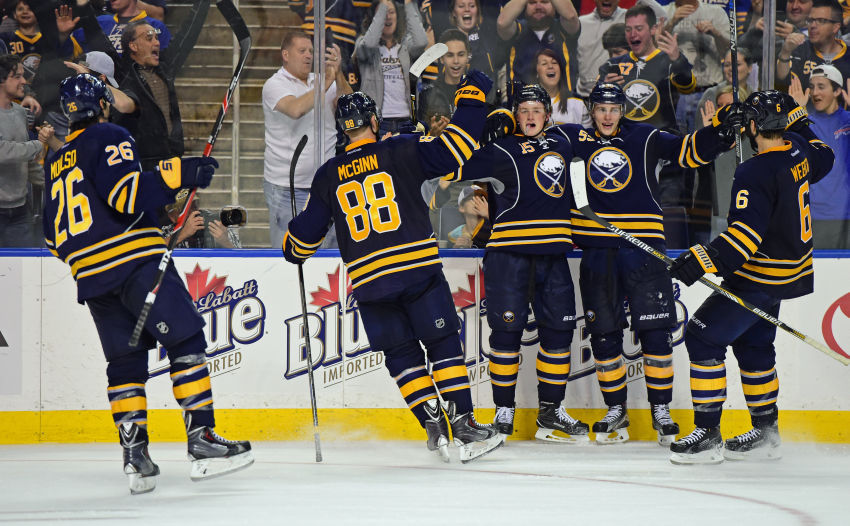 BUFFALO – Sabres coach Dan Bylsma knows Jack Eichel’s second NHL goal, a scintillating wrist shot from the left circle the rookie center created with some dogged determination and slick moves, will be replayed over and over again.

Three games into his career, Eichel, 18, has already scored a phenomenal goal.

Get used to seeing every last part of it.

“You will see that goal again,” Bylsma said Monday following the Sabres’ 4-2 win against the Columbus Blue Jackets. “We’ll see it replayed again, just all of it – the track back, the stealing of the puck and winning the battle and creating space and then the shot from an improbable angle right at the corner of the net.”

Got all that? Yes, Eichel’s goal, the winner 9:21 into the third period in the Sabres’ first triumph this season, was that loaded.

It started when teammate Matt Moulson deflected Eichel’s pass from the left circle backwards toward the Columbus blue line. Eichel then zoomed back, outmuscled Columbus’ Boone Jenner for the puck just inside the line and raced back down the left wing.

Without stopping and with Columbus goalie Sergei Bobrovsky giving just a little corner over his right shoulder short side, Eichel’s quick release hit the back of the net.

“You’re looking at one of the best goalies in the league in Bobrovsky right there,” Bylsma said.

When Eichel reached the bench, Bylsma, who has been on the second overall pick to improve his play away from the puck, gave his newest star a fist bump.

“That’s what he likes to see, working back for the puck and getting reward,” Eichel said. “It’s nice to score a goal.”

Even Bylsma plans to show the goal to Eichel again.

“That would be one we’ll pull out again later on,” he said. “That is exactly how you play without the puck. It gets there, arrives, wins the battle. That’s a pretty memorable goal.”

“It’s huge to get it here,” Eichel said. “We’re going to Florida with some confidence.”

The Sabres, who had snippets of strong play Thursday and Saturday, put together their strongest all-around effort before 18,075 fans inside the First Niagara Center.

Eichel added: “We had a lot more jam. We scored that goal and got some confidence, and played a little bit better with the lead. That’s how we’re going to have to play every night, but obviously it helps a lot when your goalie plays really well.”

The Sabres scored more goals in the third period, three, than they had all season, two.

That play helped set a tone.

“It was huge, just what we were doing in the first, to keep that going,” Sabres winger Ryan O’Reilly said. “It just keeps the bench up and alive, even the building, it keeps the building excited.”

After Columbus’ Brandon Saad made it 2-1, Eichel answered. Moulson’s power-play goal at 15:47, part of a three-point afternoon, sealed the game after Scott Hartnell scored.

The best shot of the game, of course, was Eichel’s goal.

“It’s amazing that young he’s got that strength and that release, like the speed and strength of it, it’s phenomenal to watch, and I think there’s going to be a lot more to come,” O’Reilly said.