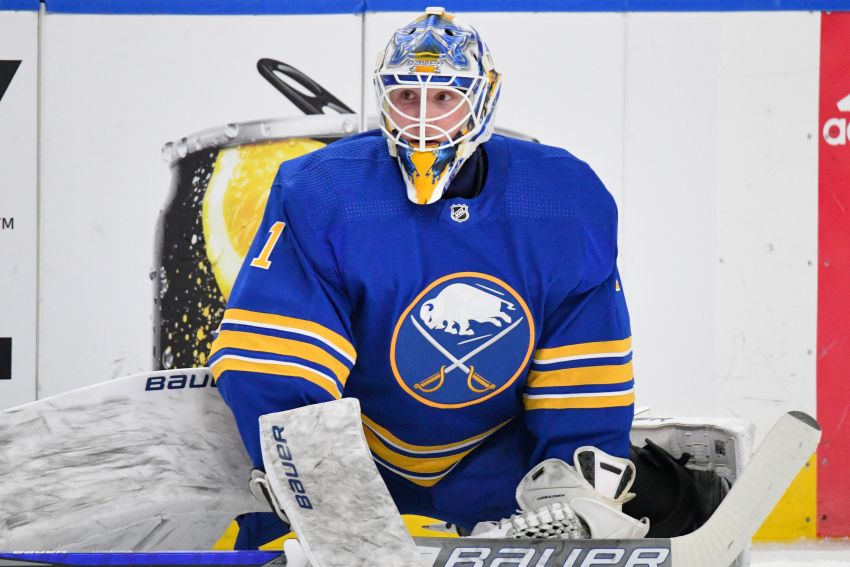 The Sabres’ only other goalie on an NHL contract, Michael Houser, has spent most of his career in the ECHL.

They’re out of options, so Luukkonen, 22, will make his first NHL start tonight.

“Situations dictate a lot, and clearly the situation we’re in is one that represents a greater opportunity to do this, to have him have his first game,” interim Sabres coach Don Granato said on a Zoom call this afternoon. “We’re just not healthy enough. Had Hutton and Linus both been healthy right now, this wouldn’t be happening right now. That cleared way for this opportunity.”

A goaltending debut hasn’t been this anticipated since Miller’s on Nov. 19, 2002.

“The bit that I have watched him, it’s clear to see his athletic ability already,” Granato said of Luukkonen. “His positional knowledge. His size, he has a presence. There is a definite presence to him in the net. So, to the quick eye test, he’s been fun to watch and see. I’m like anybody else. We all are, we’re waiting. We’re excited to see him at the next level.”

Sabres defenseman Rasmus Dahlin said: “It’s very exciting to see a young goalie play his first game. You can see him in the locker room, he’s very happy and excited. So we’re going to do everything we can to get his first win.”

Luukkonen, a second-round pick in 2017, 54th overall, backed up Tokarski the last two games, giving him a chance to examine NHL action up close.

“We waited a couple days, obviously,” Granato said. “To have him here, to acclimate to his surrounding as much as he could. We’re playing the same opponent again, so he’s been able to watch them. He’s had the time to prepare for this, which is better.”

The Sabres are a much better team than just a month ago, so Luukkonen has entered a stable situation. They’ve been defending confidently and limiting prime scoring opportunities.

“So we feel we’re bringing him into a situation that’s better than it was a few weeks ago, as an example,” Granato said. “I think all of that ties in. And then his growth and maturity is a factor as well.”

Luukkonen, who recently suffered a lower-body injury with the Rochester Americans, hasn’t played since April 10. He struggled after the Amerks’ COVID-19 pause, compiling a 2-3-1 record and an awful .863 save percentage.

Many Sabres players and staff members have received at least their first vaccine dose since New York State opened up vaccinations to those 16 and over, according to the team.