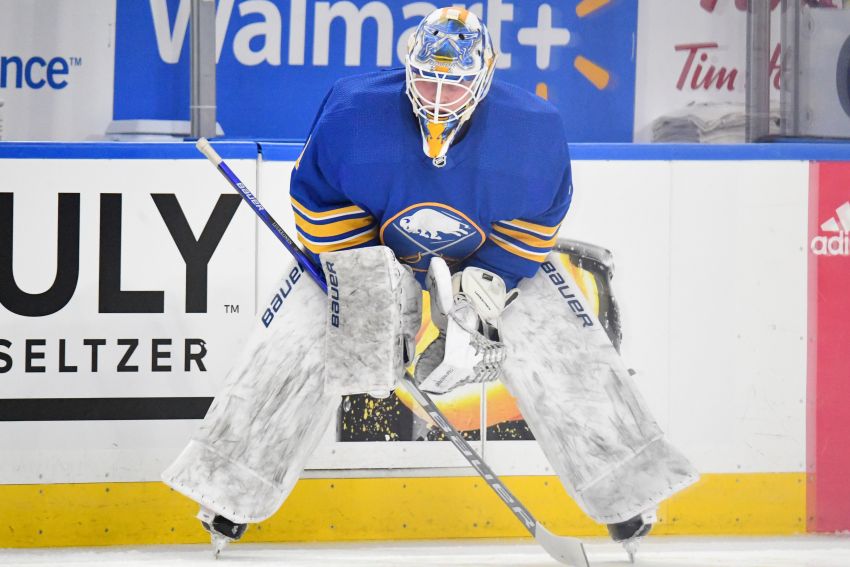 BUFFALO – Sabres goalie Ukko-Pekka Luukkonen looked a little wonky early in his NHL debut, allowing a goal on the first shot he faced barely two minutes into the game. Later in the period, the Boston Bruins hit two goal posts.

But Luukkonen, 22, enjoyed plenty of help for much of Friday’s 6-4 win, allowing him to settle in and grow more comfortable as the night progressed inside KeyBank Center.

The Sabres stymied Boston’s offense early, limiting them to just five shots in the first period. They grabbed a two-goal lead in the second period and extended it early in the third, giving Luukkonen a cushion.

While the Bruins scored three late goals and nearly erased a 5-1 deficit, Luukkonen earned the win and looked sharp, making 36 saves, including 19 in the third period.

“That wasn’t the way I imagined that the start would be, but I think we played really well today as a team,” said Luukkonen, who registered his first save 9:55 into the game. “Huge thanks to the boys today. We played a really solid game. I think you can’t think too much about those goals that happen.”

Luukkonen, the Sabres’ top goalie prospect, stopped 28 straight shots after Steven Kampfer scored from the inside of the left circle 2:15 into the game.

“We make a couple mistakes and leave a point-blank shot for his first shot in the NHL,” interim Sabres coach Don Granato said on a Zoom call. “We kind of left him out on his own on that one. So he battled. He looked great from that point forward.”

The 6-foot-4, 220-pound Luukkonen, who was recalled from the Rochester Americans last week, said he caught up to the NHL’s pace and started feeling comfortable in the second period.

“It’ll take a couple of more games to actually feel real comfortable at this level,” the Finn said.

The Sabres’ offense, which mustered just one total goal in two losses to the Bruins earlier this week, also reached another level Friday.

After Kampfer scored, Reinhart tied it at 15:40, registering a rare power-play goal. Defenseman Rasmus Dahlin and center Casey Mittelstadt put the Sabres up 3-1 in the second period.

Rookie winger Arttu Ruotsalainen and Reinhart’s second power-play goal extended the lead to 5-1 before the Bruins scored three late goals in about a five-minute stretch.

The Bruins mounted their late comeback thanks to some luck. Old friend Taylor Hall was credited with a goal at 17:12 that Sabres defenseman Rasmus Ristolainen deflected past Luukkonen.

When Hall’s goal got the Bruins within one, the Sabres did not panic.

“The chatter on the bench was outstanding, the posture of the guys on the bench,” Granato said. “Just listening to them speak after we gave up a couple goals and it was close, very commanding voices in initiative taking responses by them. So that was very nice to see as far as the psychology of it goes.”

“I’m so happy for (Luukkonen),” said Sabres defenseman Mattias Samuelsson, who recorded his first two NHL assists. “He’s an awesome guy. Playing in Rochester a little bit this year with him, I saw how talented he is and how hard he works. Everyone here is really happy for him and there will be a lot more to come.”