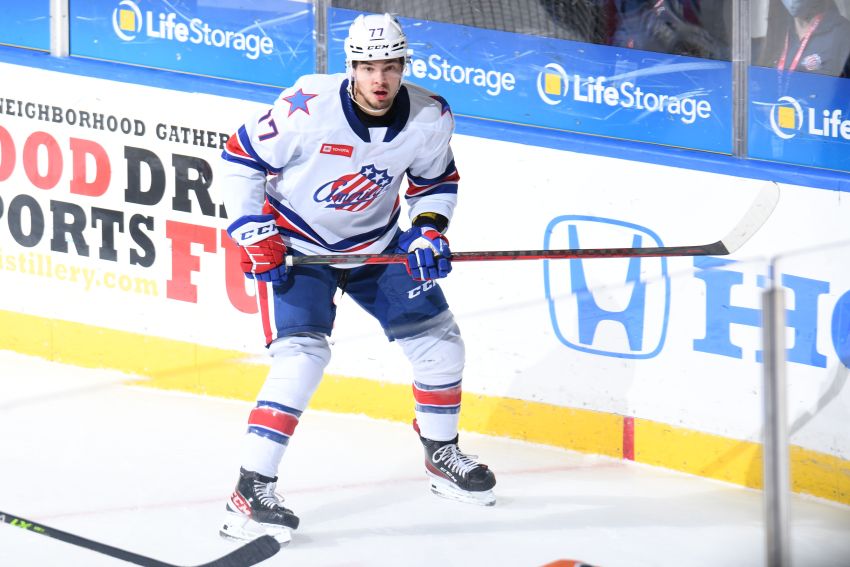 ROCHESTER – Sabres prospect JJ Peterka was recently working his way back into the lineup when the Americans wanted him to start killing penalties during practice.

For Peterka, 20, earning the coaches’ trust signaled his development had reached another level three months into his rookie season.

The German was so excited that whenever he made a nice play, he made sure assistant coach Mike Weber, who runs the Amerks’ penalty kill, noticed what he had done.

“Signifying that, ‘Hey, I think I’m ready for my chance,’” Appert said.

Peterka, who was wearing an orange non-contact jersey, couldn’t be missed that day.

“I think I did pretty good there (in practice),” Peterka said following Saturday’s 4-2 loss to the Utica Comets at Blue Cross Arena.

Peterka did so well, in fact, he has been killing penalties since returning from the AHL’s COVID-19 protocol and an injury Jan. 21. After nearly half a season in North America, the Sabres believed the winger deserved an opportunity to shoulder more responsibility.

Appert said he and Sabres general manager Kevyn Adams and assistant GM Jason Karmanos had spoken all year about adding Peterka to the penalty kill. First, however, the youngster needed to improve his five-on-five and defensive habits.

“Some of the American League is throwing the youngsters in the deep end, a life jacket and having them figure stuff out, which I think is good as well,” Appert said. “But I also think some of it as a staff is trying to balance how much to give, because you don’t want them drowning, you want to give them enough adversity to where they’re growing and learning but not so much that it buries them.”

The 5-foot-11, 192-pound Peterka quickly established himself as a top AHL scorer, recording four goals and 19 points in his first 18 games. Overall, he has registered eight goals and 31 points in 31 contests this season. He ranks fifth in AHL scoring among rookies.

With some of the Amerks’ top forwards in Buffalo – Mark Jankowski, Peyton Krebs and Jack Quinn have all been recalled – Peterka has kept producing offense.

But talent and scoring prowess can only take him so far. Appert said Peterka has been challenged from the get-go to increase his daily competitiveness and develop stronger habits.

Peterka, for example, said he has focused on improving his defensive-zone play so he doesn’t cheat for offense.

When Peterka, a second-round pick in 2020, 34th overall, returned after a five-game absence, Appert learned how much he has matured in a short time.

Appert said if Peterka had missed two weeks earlier in the season, he would’ve come back and “been very sloppy.”

“Because now in late January he’s put so much time into his daily habits, his daily routines and playing the game the right way and not just offensively, but all areas, his habits held through a two-week off period, and he came back and he was outstanding,” Appert said.

The Amerks have also been working with Peterka, who possesses a fun-loving personality, to become more even-keeled. They want a more consistent approach.

Peterka acknowledged that if things are going poorly, he can “kind of get frustrated.”

“I’m still working on it and need to get that fixed,” said Peterka, who played his first two games with the Sabres in late December.

Appert said he wants Peterka to be the happy person he saw in Buffalo.

“I always remind him I want him to be the JJ I saw at the podium in the NHL with that massive smile on his face looking like a kid on Christmas,” Appert said. “He’s at this best when he has that life and that energy to him. It’s always a challenge with any player.”

Notes: The Sabres, who had Monday off, close their four-game road trip tonight against the Vegas Golden Knights, their final contest before the NHL All-Star break. … Appert said Monday forward Ryan MacInnis will be sidelined four to six weeks after suffering a lower-body injury Saturday. … Amerks defenseman Brandon Davidson, out with an upper-body injury since Nov. 5, practiced again Monday.