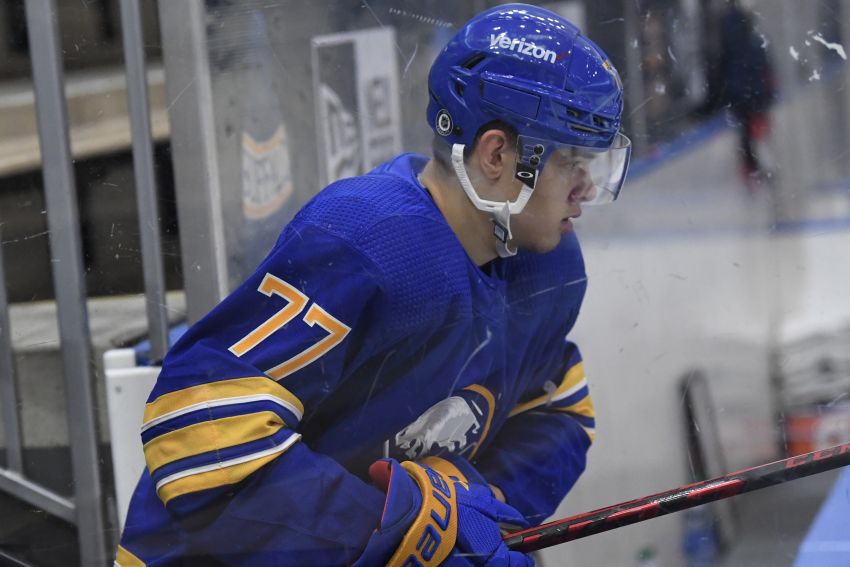 JJ Peterka learned he was recalled in the grocery store. ©2021, Micheline Veluvolu

BUFFALO – Sabres prospect JJ Peterka was grocery shopping with Linus Weissbach on Monday in Rochester when his teammate’s phone rang.

“That was kind of weird but then I got the phone and Appert told me I got called up, so it was amazing,” said a smiling Peterka, who was officially recalled this morning with centers Peyton Krebs and Arttu Ruotsalainen.

When Peterka, 19, returned home – he needed WiFi to use his phone – he immediately called his parents, who are vacationing in New York.

His parents plan to be in Buffalo to watch his NHL debut Wednesday against the New Jersey Devils.

“It was great timing, I guess,” said Peterka, a winger the Sabres drafted 34th overall in 2020.

“His cheeks flared out,” Ellis said following this morning’s practice. “Just enthusiasm, from the second both those guys arrived today.”

Krebs, 20, is another top-end prospect who will likely be a huge part of any success the Sabres enjoy in the future.

“Fresh start for me with a new organization,” Krebs said. “I think definitely feels a little bit like the first game. At the same time, I definitely have an outlook on what it’s going to be like on the ice. It’s exciting.”

It was expected Krebs and Peterka would make it to Buffalo, if not this season then next one. But the Sabres’ COVID-19 problems – they have five forwards in the NHL’s protocol – forced them to recall the prospects now.

“They’re both great hockey players in their own right, they both bring different things to the table, and they’re big pieces to what we’re trying to do moving forward,” Ellis said. “So to get them in and get a live look, we’ve certainly been watching a lot on video. I mean, even as a coaching group, we’re pretty dialed in to what’s gone on in Rochester and how those guys are playing, so we’ve seen them via video quite a bit.

“But to have them here in house and see them live on the ice up close, JJ we had the opportunity in camp. But with Peyton, it’s our first look. So it’s pretty cool to have them in mix and look forward to building off today into tomorrow.”

One thought on “Sabres to showcase glimpse of future in prospects Peyton Krebs, JJ Peterka”