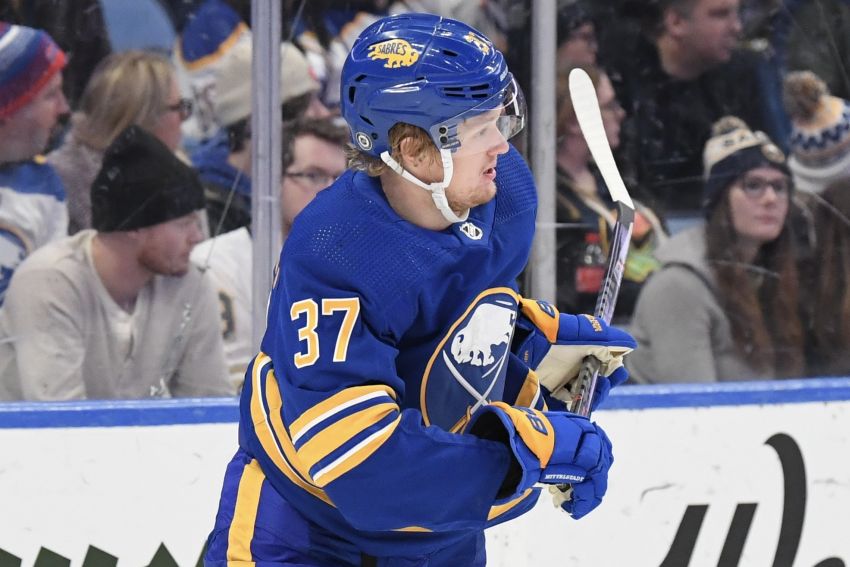 Considering the chaos the Buffalo Sabres endured over a wild 36 hours, the end result, a weekend split capped by Sunday’s 4-1 road loss to the Colorado Avalanche, wasn’t too bad.

The Sabres, despite playing without center Tage Thompson and losing center Casey Mittelstadt early in Sunday’s contest, hung tough against the heavyweight Avalanche.

At one point late Sunday, when winger Victor Olofsson briefly left the game after taking a high stick, the Sabres had just nine forwards.

“I loved our battle, our compete,” Sabres coach Don Granato said on a Zoom call from Ball Arena.

The Sabres experienced uncertainty all weekend as players moved in and out of the lineup. On Saturday, three Sabres players, one coach and four members of their traveling party entered the NHL’s COVID-19 protocol, yet they beat the Arizona Coyotes 3-1 with 11 forwards and seven defensemen. They used that lineup again Sunday.

The NHL determined there was an issue with the COVID-19 test results, according to The Buffalo News, and after some retesting, eight PCR tests returned negative.

Olofsson, defenseman Rasmus Dahlin and assistant coach Matt Ellis scrambled to find a flight and made it to Denver for the game. However, winger Rasmus Asplund, who also left protocol, couldn’t make it in time.

Granato said he told his players prior to the game, considering the circumstances, it might take them a bit to get going against Colorado.

“We just played back-to-back,” Granato said. “You had Victor and Dahls flying commercial at 3 o’clock today, adjusting to altitude change, which is significant. It always does, it takes you a bit to get acclimated, adjusted, especially in the altitude. We said we’re going to get better and better as the game went, and I think our guys picked up the feel of the game, the pace of the game with the intent we’ll play a game to win.

“I love that intent tonight, we played to win. We did not sit back and wait. This team is the top team in the NHL right now.”

Against a team that won its 18th straight home game and 10th consecutive game overall, the Sabres roared back. After Gabriel Landeskog’s first-period goal, Sabres center Dylan Cozens tied the game 2:37 into the second period.

Colorado went up 2-1 when Nazem Kadri scored after an apparent hand pass at 11:15.

The Sabres lost their challenge – Granato was incensed – and received a delay of game penalty. Mikko Rantanen scored on the ensuing power play.

Still, the Sabres kept up with the Avalanche the rest of the night.

“I love the way our guys responded and took it back fast,” Granato said.

Sabres goalie Dustin Tokarski said: “With the adversity faced these last two days, even this game, going down to 10 forwards and nine for a bit with (Kyle Okposo’s) fight, and we battled hard. I think that second period, first 10 minutes was some of the best hockey we’ve played. With everything going on, I’m proud of how we played today.”

Tokarski made 32 saves in his first game since Nov. 29. He had been dealing with he effects of COVID-19 after entering protocol Dec. 2.

Granato said Mittelstadt, who played just 4 minutes, 59 seconds, possibly left the game as a precaution. He said he will know more today.

Mittelstadt returned from an upper-body injury last week, his second this season. Sunday was just his seventh game.

“We knew (playing) back-to-back would be tough,” Granato said. “It was unfortunate he wasn’t comfortable in the moves he was trying and then probably pulled out early because of precaution.”

Thompson suffered an undisclosed injury early in Saturday’s game but finished it.

“Tage, he just couldn’t get there before the game,” Granato said. “The injury he had, he played last night through it, and it was tight. He could’ve potentially played through it tonight if it didn’t inhibit stride and skating. But it was, it still got to that point.

“Obviously, you jump out of the game, the adrenaline stops of last night. It’s always worse the next day. He couldn’t even move this morning. He got good movement by the game but the strength wasn’t there. So just day to day is the hope there.”

“That is awesome,” Granato said. “She is very, very deserving. Obviously, she wouldn’t be here if she didn’t do a great job. It’s fun, I was just informed that she was only the third female behind the bench. That’s not enough because there’s so many qualified.”

Goalie Aaron Dell cleared waivers Sunday but is still on Buffalo’s roster. Dell has one game remaining in the three-game suspension he earned for hitting Ottawa Senators winger Drake Batherson.

One thought on “Sabres battle to end of crazy weekend; Casey Mittelstadt leaves loss to Avs”