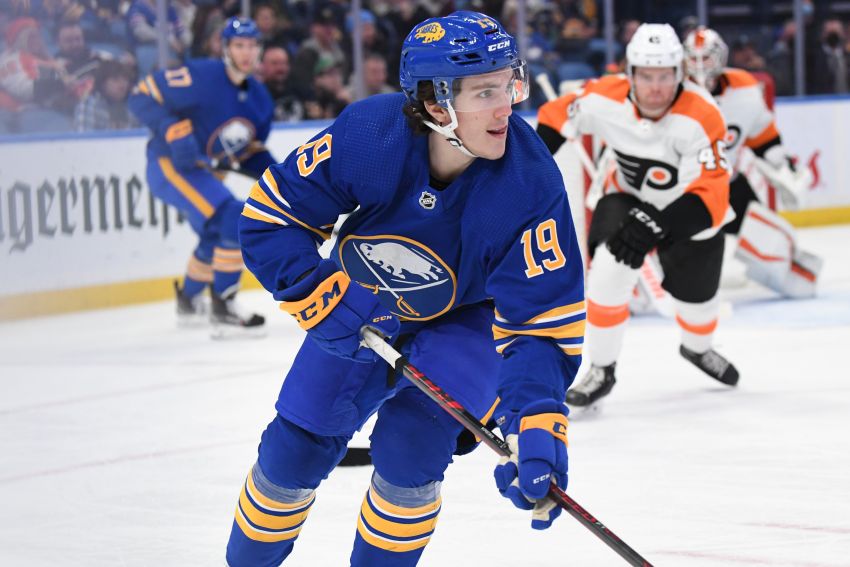 BUFFALO – The play in Saturday afternoon’s 6-3 win that illustrates the special talent the Sabres possess in center Peyton Kresbs wasn’t the goal he scored 18 minutes into the game, the first of his NHL career, or his nifty breakaway score minutes later.

Of course, in scoring twice in a span of 4 minutes, 24 seconds, Krebs, 20, displayed the supreme hockey sense and terrific skill set that make him such a coveted young player.

“I’m not known as a goal scorer, so I wasn’t too worried about it,” Krebs said of scoring his first NHL goal in his 20th game. “But it’s kind of just a nice thing to get off the back.”

Then after leaving the penalty box just over two minutes into second period, Krebs corralled winger Rasmus Asplund’s stretch pass at Philadelphia’s blue line and zoomed in before backhanding the puck past goalie Carter Hart.

“That one felt a little better,” Krebs said of his second goal.

When an excited Krebs reached the bench, Sabres coach Don Granato told him his second goal was a lot more fun to watch than his first one.

But Krebs’ play about eight minutes later, moments after he hit the post, narrowly missing a hat trick, showcased he possesses maturity that belies his experience.

When the puck moved back into Buffalo’s zone, Krebs backchecked ferociously and stripped Cam Atkinson from behind.

“At his age, it’s incredible,” Granato said of Krebs’ backcheck. “I mean, he works probably harder when there’s a switch that goes off in him when the puck is coming toward our net. I saw it watching film of him before we had him and you watch it now. He knows his responsibility and the team player in him kicks in high gear when a puck starts going toward our net.

Krebs, who arrived Nov. 4 from the Vegas Golden Knights in the Jack Eichel trade, has played seven games since the Sabres recalled him late last month. After recording a no-look backhand assist Jan. 1, he entered COVID-19 protocol and missed four games over a two-week stretch.

Returning from COVID, Krebs acknowledged, has been more of an adjustment than he thought it would be.

“I just try to stick with the system, pick my spot,” he said.

But Krebs, who played some left wing last game, clearly found a groove Saturday while centering Mark Jankowski and Anders Bjork and skating on the power play.

Granato said during one power play, Krebs broke pressure on the half wall three times as the Flyers swarmed him.

“That’s special,” Granato said. “That’s feeling of time and space and where your options are. He’s got a lot on the radar when he has the puck, as you can see. And he’s a talented kid and he’s a worker so it was nice to see him get rewarded.”

The Sabres, who blew two third-period leads at home earlier in the week, finally closed out a game and rewarded the 9,264 fans watching Saturday.

Skinner recorded his fifth two-game this season, while Thompson had his fourth. The Sabres scored three power-play goals for the first time since Oct. 14, opening night.