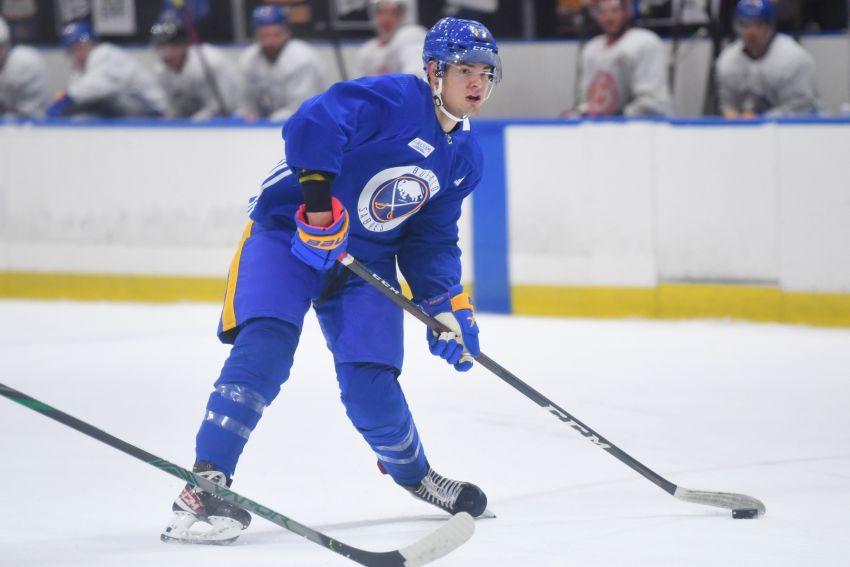 BUFFALO – Finally, after 10 months of waiting, Sabres prospect J-J Peterka was set to leave Germany and travel here to prepare for his first NHL training camp.

In normal times, of course, Peterka, 19, probably would’ve visited Buffalo two or three times over the last year. But the COVID-19 pandemic forced the winger to stay home.

“I was so curious about it, so excited the whole last year,” a smiling Peterka said following Wednesday’s rookie practice inside Harborcenter.

Then Peterka said his visa was sent to the wrong office in Munich. It took nearly a month for the problem to be resolved.

He utilized his extra time in Europe by working with a skill coach at Red Bull’s hockey academy in Salzburg, Austria, and practicing with his Deutsche Eishockey Liga team in Munich. He arrived in Buffalo on Saturday.

“I’m finally here, and I like it,” Peterka said.

“You can feel the energy from him,” Appert said.

Peterka is one of a slew of intriguing prospects on the Sabres’ tournament roster. Jack Quinn, who will center Peterka and Brett Murray on the top line, was the eighth pick last year. Murray, goalie Ukko-Pekka Luukkonen, center Arttu Ruotsalainen and defenseman Mattias Samuelsson all played their first NHL games for the Sabres last season.

The Sabres coveted Peterka so badly they traded second- and fourth-round picks to the San Jose Sharks last year to move up four spots and draft him 34th overall.

“He’s a dynamic athlete and an explosive hockey player,” Appert said. “Certainly excited to really now get the chance to be on the ice and start working with him, and then we’ll see what happens at camp. … J-J is one of those rare guys that has the speed and the skill and explosiveness of elite, dynamic offensive players, but also has the lurking goal-scoring ability that more of the intelligent offensive players have.

“He’s shown at the younger age groups to have that really good combination of speed mixed with the cerebral goal-scoring ability that all special goal-scorers have.”

Having spent the last two seasons playing pro hockey in Germany and Austria, the 5-foot-10, 181-pound Peterka probably ranks among the most polished youngsters on the roster.

“Being around adults, I would say, makes me, I think, grow as a person even more,” Peterka said. “Also in battles and to see how those guys prepare for games and all that, I think I learned a lot. It was really good for me.”

In Munich, Peterka played under Don Jackson, a legendary DEL coach who won the Stanley Cup as a player with the Edmonton Oilers and later coached in the NHL.

“He always taught me doing the details and it’s important that you have good habits and all that,” Peterka said of Jackson’s influence.

Peterka also spent last season playing with ex-Sabres center Derek Roy. While their time together was brief – Roy played just 12 games for Munich before retiring in May – Peterka tried to watch how the 11-year NHL veteran prepared for games, managed his body and practiced.

“That was really good, yeah, to have a guy like him there,” said Peterka, who was briefly Roy’s linemate.

Peterka said Roy told him Buffalo is “a nice town and that the fans here are unbelievable.”

“So I’m, yeah, excited for that,” Peterka said.

Peterka, who could be ticketed for Rochester this season, is one of a slew of high-profile prospects to come from Germany in recent years. Last year, the Ottawa Senators drafted Tim Stutzle third and the Chicago Blackhawks selected Lukas Reichel 17th.

Meanwhile, Edmonton Oilers superstar Leon Draisaitl has morphed into one of hockey’s most dynamic scorers.

Notes: Appert said Quinn, who was shifted to center from wing late last season, will stay in the middle this week. Quinn chipped some teeth at the end of Wednesday’s practice and needed dental work. … Sabres owner Terry Pegula watched the first official session of the season from a box. … The Sabres open the tournament Friday against the New Jersey Devils. … The Sabres wore Verizon stickers on their helmets Wednesday. They sported KeyBank decals last year, the first time the NHL allowed advertising on helmets.