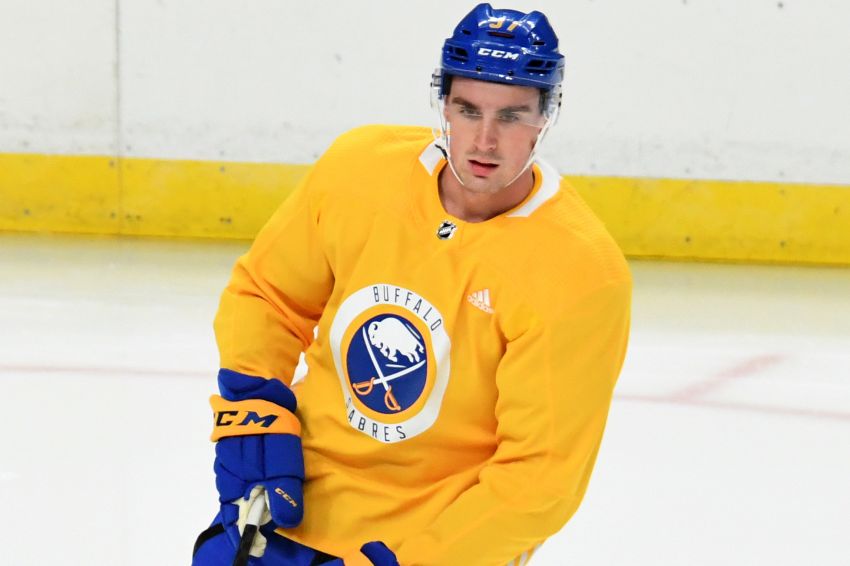 Three years ago, Murray, who made his NHL debut in Thursday’s 8-4 loss to the Pittsburgh Penguins, left Penn State and returned to junior. Before last season, after making a stronger commitment to his conditioning, he received an AHL contract.

Murray, a fourth-round pick in 2016, 99th overall, parlayed a solid rookie campaign with the Rochester Americans into an entry-level NHL contract.

Then on Thursday morning, Murray, who earned a recall to the taxi squad Tuesday, spotted his name on the Sabres’ line chart during the pregame meeting inside PPG Paints Arena.

“I’m at a loss for words,” Murray said on a Zoom call. “It’s honestly something that you work for, every player has worked for their entire life. To finally see your name on a line chart in the NHL is just one of the coolest things in the world.”

Murray said his journey to the big leagues “might be a little different than the guy sitting next to me.”

“Yeah, it was different, but I think I came to the rink every day wanting to compete and wanting to move up, wanting to make it to where I am today,” he said. “It was a weird journey but I’m here now and now my goal is to stay here.”

Murray’s size and skill make him an intriguing prospect. He skated at left wing beside center Riley Sheahan and Drake Caggiula on the fourth line against the Penguins.

Murray has worked with Amerks coach Seth Appert to utilize his size and mold himself into an asset that would be attractive to the Sabres.

“I’m a bigger player, that means using my size to create space, not only for myself, but for my linemates down low,” Murray said of his style. “Just reliable at both ends of the ice, getting to the front of the net and, again, using my size just to … create turnovers and get the puck back to our stick and hopefully to the back of the net.”

Granato said Murray was consistently effective and “impactful” in that role.

“He earned it,” he said of Murray’s NHL debut.

Murray became the seventh Sabre to play his first NHL game this season.

The rookie replaced Cody Eakin, who has “got some soreness,” Granato said. The Sabres recalled Murray from the taxi squad prior to the game and assigned forward Jean-Sebastien Dea to the practice group.

Granato left open the possibility Sabres goalie Linus Ullmark could play Saturday, although it appears unlikely. The Swede has missed the last 13 games recovering from a lower-body injury.

“He has to tell us that he’s comfortable and can do what he needs to do,” Granato said. “He knows the standard and our expectations of when we go in the net. … I would say it’s not probable, but if he comes to me and says he’s ready to go, I would probably make room for him.”