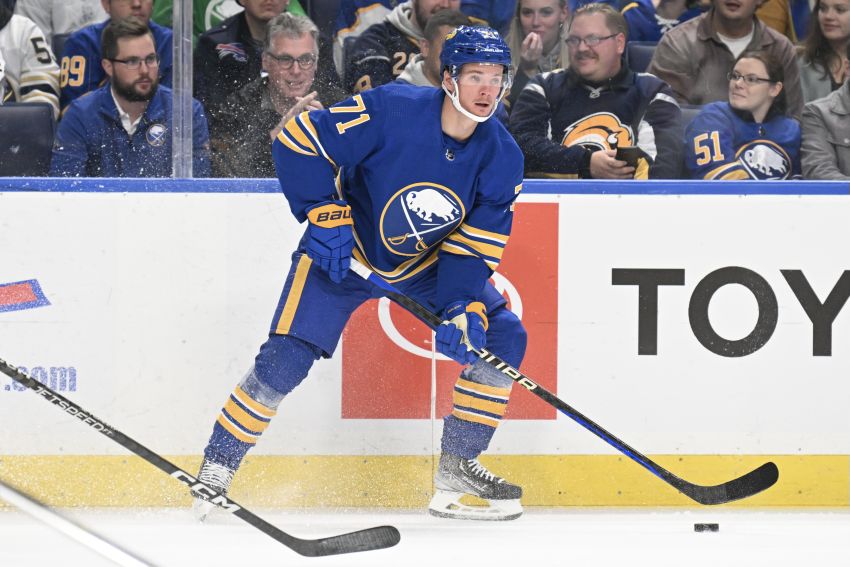 Olofsson, Granato explained, was battling a soft issue injury – it turned out to be his wrist – that hampered his shooting, his greatest asset. He would massage the puck, and that extra split-second allowed the goalie to catch up.

“He was frustrated and very down because he couldn’t score and he’s in the lineup and people are wondering what’s wrong with him, what happened to him,” Granato said prior to Thursday’s 4-1 season-opening win over the Ottawa Senators at KeyBank Center. “We couldn’t tell people that he couldn’t shoot the puck still. So his superpower was nullified, was a way to look at it.”

On Thursday, Olofsson, 27, opened his fourth NHL season at right wing on the No. 1 line beside center Tage Thompson and Jeff Skinner and scored two empty-net goals. Olofsson finished last season on a tear, compiling 15 goals and 28 points in his final 34 games, reaching the 20-goal mark for the second time.

Olofsson’s wrist eventually healed. Still, the 30-game goalless stretch forced him to evolve. Granato said the Sabres challenged the Swede, who has often been labeled as a one-dimensional power-play stud, to find ways to improve.

“That was a tough stretch for me and I wasn’t 100 percent fit, obviously,” said Olofsson, who signed a two-year, $9.5 million contract in July. “I think it’s just a great learning experience and just going through that mentally was probably something I never experienced before in my career. I feel like I just came out stronger and feel like I probably learned to be more patient, definitely so. I feel like I came out of that as a better player.”

Olofsson developed into a much better presence at five-on-five, scoring 13 times. He had registered just 15 of his 35 goals at even strength prior to 2021-22.

“You have to look at the game different,” Granato said. “You have to react within the game differently. He really, really did a great job taking that to heart and identifying areas that he could improve on and add to his game, and we have a better player because of that unfortunate adversity he went through.

“He went through it, but he also found a way to make sure it was a positive, and it’s a real credit to him, and it’s exciting to see him flourish not only physically, but mentally, too, because that was a tough road for him.”

Over the past several months, Sabres general manager Kevyn Adams said he has sensed a change when he speaks to agents.

Why? Well, Adams believes the hockey world has caught on to what his team has started building.

“What I can say confidently is 12 months ago when I was talking to agents and 24 and 18 months ago was a very different tone than what I hear now,” Adams said Wednesday after the Sabres signed Granato and defenseman Mattias Samuelsson to contract extensions. “I get calls every day talking about there’s something special building there, we hear that and we’re hearing good feedback from the locker room and our players are excited.”

Forward Riley Sheahan, who’s on injured reserve with a muscle injury, skated in a non-contact role with his teammates Thursday morning.

The Sabres honored the lives lost in the May 14 shootings in Buffalo by having both teams come together at center ice with family members of the victims.

The Sabres will be wearing “Choose Love” stickers on their helmets this season.

Notes: Fans gave the family of former coach Joe Crozier, who led the Sabres to their first playoff berth in 1973, a standing ovation. Crozier died Tuesday at 93. … Legendary Sabres play-by-play man Rick Jeanneret, who retired following last season, handled the pregame introduction of the Sabres. … Senators defenseman Jake Sanderson, the fifth overall pick in 2020, made his NHL debut against the Sabres, one of seven NHL teams his father, Geoff, played for during his 16-year career.