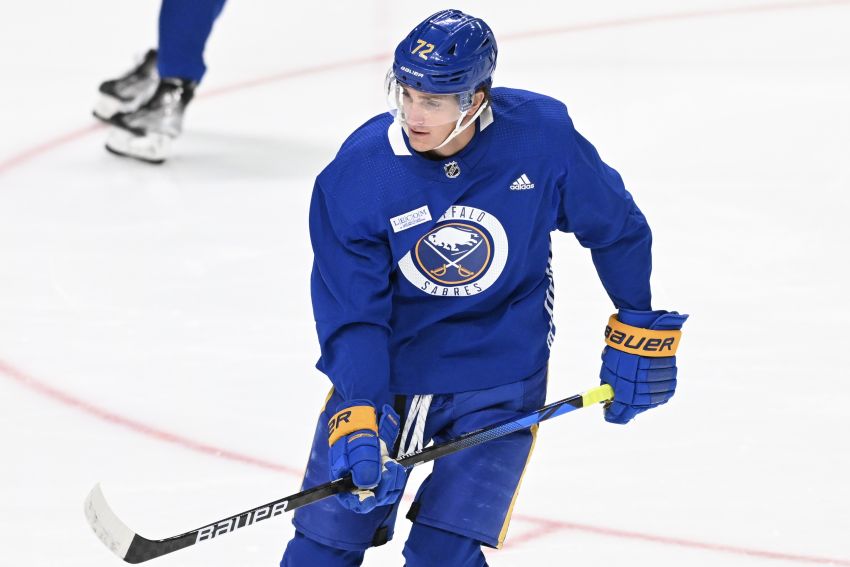 BUFFALO – Since center Tage Thompson signed a surprising seven-year, $50 million extension, general manager Kevyn Adams has often been asked why the Sabres gave such a huge contract to someone who has enjoyed just one standout season.

Heck, even Thompson, 24, seems a little surprised he earned the deal, which he signed Aug. 30 and begins next season.

“It’s a huge leap of faith from the organization and management,” Thompson said Thursday following the first sessions of training camp at KeyBank Center. “I’ve said multiple times this is a place I want to be for a long time, so I’m excited.”

In his first four years, as he changed teams, had trouble staying in the lineup and suffered a season-ending injury, he mustered only 18 goals in 145 outings.

Still, Adams believes Thompson’s ability to overcome his early struggles illustrates his maturity. The adversity he endured might’ve broken or overwhelmed another youngster.

Thompson, however, plowed through everything. When an opportunity materialized to become the Sabres’ No. 1 center, he seized it, showcasing enormous growth after coach Don Granato moved him from right wing.

“He had a lot of challenges as a young player,” Adams said. “He gets put in a high-profile trade (for Ryan O’Reilly). He spent time in the minors. He’s been through a tough injury. He was scratched. He was on the taxi squad. And none of this stuff kept him down. It wasn’t, ‘Woe is me.’ It was, ‘I’m going to get better and I’m going to figure out a way to have success.’

“I actually think that body of work that he put together gives me personally comfort that he’s the type of player we want to have here for a long time.”

The Sabres, of course, examined more than Thompson’s on-ice exploits. That’s why they feel so comfortable giving him a massive raise. He’s beginning the final season of a three-year, $4.2 million contract.

“And then you’re projecting out, do we believe this player will continue to grow and get better and they have the right kind of that growth mindset where regardless of what their contract status is, they’re going to get up every day and try to get better? And that’s Tage Thompson to a T.”

Granato said while Thompson’s 38 goals are important, he values the “indicators of future growth and success” he has displayed.

“Starts with internal demand and drive for any guy,” he said. “Let’s face it, there’s lots of people that put the price tag that’s on that and that’s like winning the lottery. And there’s lots of people that might not hang on to their job if they win the lottery. So when you start handing out that type of contract, you want to make sure that that person loves the game and loves the job he does. Tage does, he exemplifies that. “

Granato said Thompson will never feel content. When he scored his 30th, Granato said he leaned over on the bench and told him, “I know you’re thinking like me. This is a great reward but let’s go get 31 and more.”

Thompson said “there’s always areas in your game you can grow.”

“Last year, obviously, I think went well and was a successful season, but I want more,” he said. “I want to score more, I want to do more to help our team win. I want to be better defensively. …

“You never want to be comfortable or complacent with where you’re at in your game. For me, I think it’s just kind of remembering where I was at last year and continuing to get better and outdo myself.”

The Sabres will hold a “Blue vs. Gold” scrimmage this morning at LECOM Harborcenter.

Sunday afternoon’s preseason opener against the Washington Capitals will be televised on NHL Network.