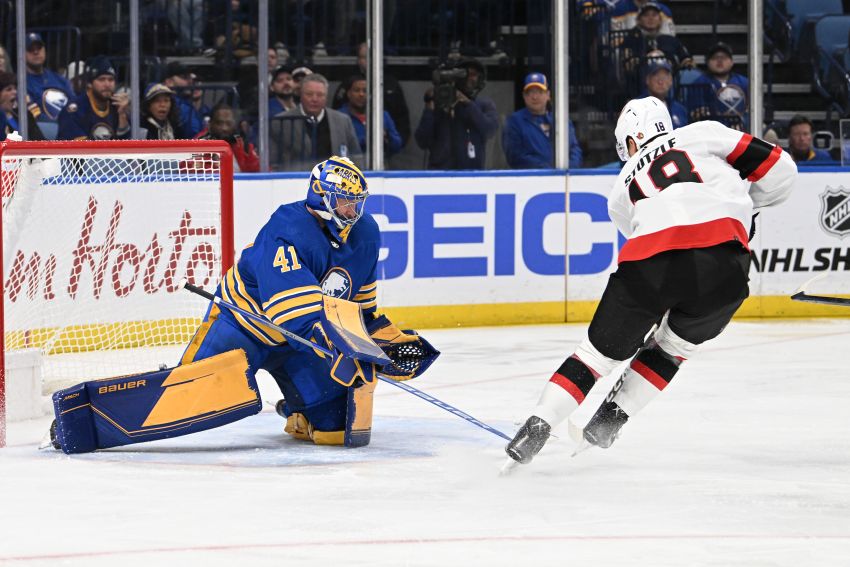 BUFFALO – After making some breakaway saves during the first 40 minutes of Thursday’s 4-1 win, 41-year-old Sabres goalie Craig Anderson said he told his teammates he usually stops 80 percent of those chances.

“So I’ve stopped four, the fifth one’s probably going in, so we should probably clean that up,” Anderson joked following his splendid 35-save performance in the season-opening victory over the Ottawa Senators.

Kidding aside, the NHL’s youngest team showcased maturity as they battled back from an early 1-0 deficit.

“We found our game pretty quick and we battled through it and we find a way to win,” said Sabres defenseman Rasmus Dahlin, who scored the go-ahead goal. “We want to play a fast game. Ottawa was a good team but we really stuck with it.”

For the next 33 minutes, the Sabres clung to the lead before the noisy crowd of 15,364 fans inside KeyBank Center, getting some huge stops from Anderson, including a poke-check save in the third period.

“It’s amazing to think he’s 41 when you watch,” Sabres coach Don Granato said. “This is a young man’s sport. The body is so important. And in this sport, you’re in your prime as an athlete in your mid-20s. And so anything after that is just perseverance. And any guy that plays in the league after that is persevering.

“Tremendous, tremendous job tonight because we don’t win that game tonight without him holding things down at really key moments. If you fall behind the way we were squeezing our stick at times, that’s not a good recipe.”

Dahlin the Sabres trust Anderson with “everything.”

“Almost too much,” he said. “So we’re really happy to have him and he brings such a calm to our game.”

Anderson can also bring calmness through his words. He said he was “just keeping the room light” during the second intermission.

“Too many times coaches, players, they get all uptight and upset about certain plays,” said Anderson, who spent nearly a decade with the Senators. “And in the grand scheme of things, if you do nine things great and you do two things bad, that’s an overall good night.

“Even if they score on those two bad things, you’re doing a lot of good things. And that’s the message, right from the top. There’s going to be mistakes. But how are you going to bounce back? How are you playing in general as a whole? Learn from your mistakes and move forward.”

At times during recent seasons, mistakes have sapped Dahlin’s confidence. But he has grown much stronger mentally over the last year, learning to trust his instincts and plow forward.

“Tonight he was teetering on that confidence issue with frustration,” Granato said. “He pressed a lot. But we’ve seen him in the past press and lose complete efficiency in his game. That wasn’t the case tonight. He definitely showed maturity in that regard. He didn’t feel his best but when you’re not on your game, don’t press as much. Figure out what needs to be done. I thought he did a nice job with that.”

A little more than seven minutes into the second period, Dahlin grabbed the puck in his own zone, slickly undressed Mathieu Joseph and pulled away up the ice.

When Dahlin entered enemy territory, he dished to winger Peyton Krebs and skated to the crease, staking out a prime spot as captain Kyle Okposo moved the puck behind the net.

A second later, the Swede connected on Krebs’ pass from below the goal line, beating Ottawa goalie Anton Forsberg at 7:25.

“You probably saw me a couple times mess up, but you just have so much confidence,” Dahlin said. “When that play works, it’s a goal.”

As Dahlin spoke, an excited Peterka, who completed a nifty give-and-go with center Dylan Cozens at 4:31, spoke to reporters across the room.

“He was very determined in puck battles and showed a lot of strength,” he said. “Once he won a battle through that, he opened up and saw lots of options and plays.”