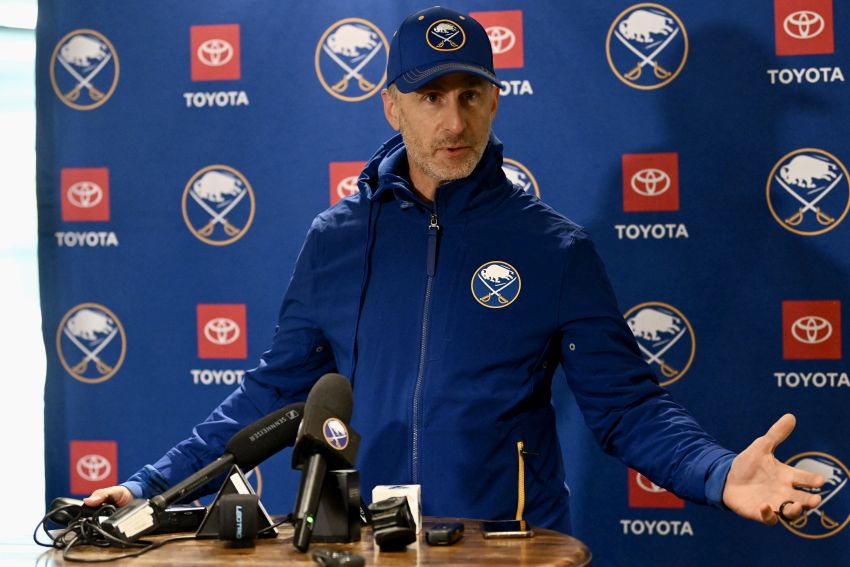 Over the past six weeks, Adams, Granato, leading scorer Tage Thompson and top-pair defenseman Mattias Samuelsson have all signed extensions.

On Wednesday, the eve of the season opener, the Sabres announced Granato’s “multi-year” contract and Samuelsson’s seven-year, $30 million deal within an hour.

Granato signed a two-year extension that kicks in when his current contract expires after the 2023-24 season, according to The Athletic’s Pierre LeBrun.

The vision and close relationship Granato, 55, and Adams, 48, share makes them unique in these parts. After Darcy Regier fired Lindy Ruff in 2013, the Sabres employed six coach-GM duos over a dismal eight-year stretch. None of them generated positive results or seemed to enjoy any chemistry.

But when Adams elevated Granato to replace Ralph Krueger during the 2020-21 season, a beleaguered franchise started moving forward.

Last season, the Sabres showcased growth as they began rebuilding, finishing on a 16-9-3 run, their most significant stretch in years. This year, they’re generating optimism. Fans are excited about this team.

“To be aligned in a shared vision is a pretty amazing thing,” Granato said following Wednesday’s practice at KeyBank Center, where the Sabres host the Ottawa Senators on tonight. “… It’s difficult to align to a shared vision, very difficult.”

“I have an incredible amount of respect for Don, just as a person, first of all,” Adams said. “The way he treats people and how he handles himself every day, but the way he views the game.”

Still, Adams said he and Granato speak openly to each other.

“We have a really solid relationship, but that doesn’t mean we don’t challenge each other and push each other,” he said. “We’re confident enough around each other to say, ‘Hey, I disagree with you and here’s why,’ both ways. I personally look for that and I know he does as well.”

Adams said when he was discussing his own extension with Sabres owner Terry Pegula, he said told him “how important Donny Granato is to this franchise.”

“I really wanted him to be a priority as soon as we could get this done with me,” he said.

Adams said Granato’s status also came up during his negotiations with players. For example, Thompson, who inked a seven-year, $50 million extension, asked how long Granato had left on his contract.

“Players truly respect and appreciate that in what he does every day,” Adams said. “I think the continuity part from myself and Donny and the calmness that we can bring every day to the staff and players, knowing we have a plan, we’re working on our plan, we’re supported by ownership, goes a long way. Now we just have to keep pushing.”

Thompson has displayed rapid development under Granato, morphing from a healthy scratch into a 38-goal scorer. Much of his success can be attributed to Granato’s decision to shift him from right wing to center last season.

“He’s done a great job,” said Thompson, who also played for Granato in junior. “I think he’s someone that all the players in here respect and want to play for. I think his knowledge of the game is something we can all benefit from. …

“He does a great job developing players and helping them reach their potential. I think that’s something I want for me as an individual and our team.”

Granato did not want to talk much about his new deal, electing stay in the moment.

“In our profession, there is no stability,” he said. “You’re just used to that, you’re accustomed to that. This is nice, but our stability is success day to day. So I can’t really wrap my mind around it too much.”

Still, Granato, who began coaching in 1993, acknowledged “this is the place I want to be.”

“This is a place I want to make right and I want to win here,” he said. “And I think what we’re building and the progression and the sequential movements that we’ll see and continue to see, we are going to win here, we’re going to be successful here doing what we’re doing.

“And when I had this presented to me as an offer, to me my mind is all on that, trying to be successful here. It was an easy yes.”