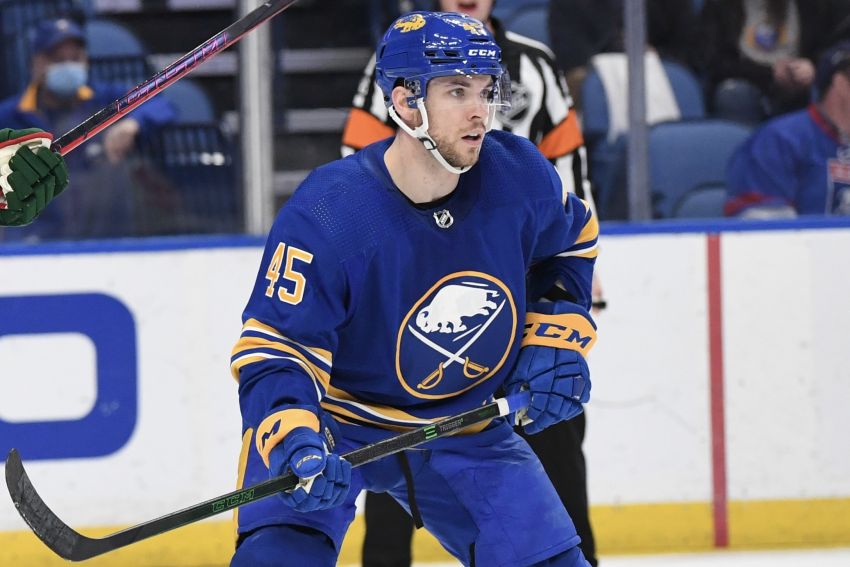 BUFFALO – In Thursday’s game against the Vegas Golden Knights, five of the six defensemen the Sabres utilized were 25 or younger.

The graybeard of the group, Robert Hagg, 27, has played all of 282 NHL games.

The rest of the blue line consisted of neophytes. Only one other defenseman, Rasmus Dahlin, 21, has played more than 200 big league contests.

When the Sabres had a surfeit of defensemen last month, they began rotating one in and out each game. Bryson and Samuelsson both sat out.

But Granato wants to toss the keys to the team’s young defenders.

Jokiharju’s return from a lower-body Thursday pushed veteran Mark Pysyk, 30, out of the lineup.

The only other time the Sabres scratched Pysyk on Feb. 13, they started their brief rotation.

Now, an experienced defenseman could be forced out every game if the Sabres have too many.

The 5-foot-11, 188-pound Fitzgerald has emerged as perhaps the Sabres’ biggest surprise this season. Thursday was his 17th straight appearance and 21st overall.

After Fitzgerald enjoyed a strong training camp, it appeared he would earn his first recall this season.

Granato, who coached Fitzgerald in junior hockey, said he felt the youngster kept “better and better” with the Rochester Americans.

“He kept playing with more confidence, playing more to his identity and impacting more,” Granato said.

Through his first weeks in the NHL, Fitzgerald’s competitiveness and grit have helped him secure a regular spot. While he’s undersized for a defenseman, he keeps illustrating he’ll take on anyone. He has already fought four times, including Thursday against 6-foot-2, 221-pound Vegas winger Keegan Kolesar in the second period.

Fitzgerald left the game with an upper-body injury shortly after the fight and did not return.

“Fitzgerald is a good kid, and he’s a team guy,” Granato said. “You see it, he fights for his teammates, he looks out for his teammates. He’s surveying the ice, and if somebody’s bumping into somebody else on the team, he’s got it on his radar. He’s going to get in there and get involved immediately.

“So he really has a lot of pride in being a competitive guy and doing it for the right reasons for his team and winning.”

“Before that is a question mark,” Granato said.

“I’m not so certain on throwing guys back in on different ice conditions in an outdoor game,” Granato said. “But they’re still not there anyway.”