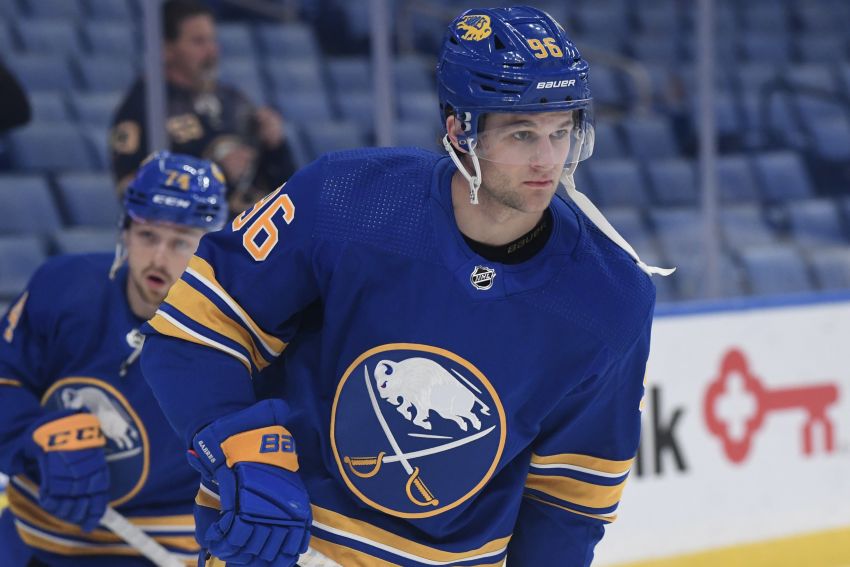 BUFFALO – Over his first 44 games with the Sabres, winger Anders Bjork has struggled to maintain consistency, mostly showcasing flashes of his talent.

Bjork, 25, scored opening night before beginning a 10-game goalless stretch. After scoring in back-to-back contests, he endured a 12-game goal drought in which he was scratched twice.

Sabres coach Don Granato said Bjork must learn to regularly imprint his identity as a player – “His is speed and quickness,” he said – within the game.

“His issue, his challenge, is consistency,” Granato said Sunday after Bjork cleared COVID-19 protocol and rejoined the Sabres for practice inside KeyBank Center.

Bjork enjoyed a terrific outing Dec. 14 in Winnipeg, registering the go-ahead goal in the Sabres’ 4-2 win over the Jets. But he has only played three times since then.

Bjork rejoined the Sabres after just five days away.

“It’s really exciting,” Bjork said of leaving protocol. “I honestly didn’t really expect it. … I’m just excited to get off the couch and back on the ice.”

On Sunday, Bjork practiced at left wing beside center Dylan Cozens and Rasmus Asplund. If Bjork plays there Tuesday against the Tampa Bay Lightning, it would give him an opportunity to skate on a scoring line.

Bjork, who arrived April 12 from the Boston Bruins in the Taylor Hall trade, has mostly spent this season in a bottom-six role, averaging 12 minutes, 9 seconds of ice time.

Overall this season, Bjork has compiled four goals, five points and a minus-6 rating in 29 games. His even-strength Corsi For of 44.3 percent ranks 21st among the team’s regulars. In 22 of his outings this season, he has registered just one shot on goal or zero. He did not record a shot in his last three games before entering protocol.

“That’s something I’m really trying to work on, having that consistency game in and game out that I can build that trust in the coaches and they know what they’re going to get from me every night,” Bjork said. “Part of that is my offensive ability and attacking the net more but other parts of that are just playing with more grit and a little harder, adding some hard-nose to my game and doing that every shift so that the coaches know that that’s what they’re going to get out of me.

“I think that’s something that I’m trying to take pride in and build because I think that’s the next step to me elevating my game for this team.

Bjork scored three goals in 15 games for the Sabres last season and a career-high nine times in 58 contests two years ago with the Bruins. He believes he can reach another level offensively.

“That’s part of my game that I do have but I have to figure out a way to show,” Bjork said. “I think part of that is earning for trust from the coaching staff and earning more ice time, then I think I’ll have the opportunity to be on the ice more and just hopefully provide more offensively.”

While Bjork returned Sunday, the Sabres will likely need to summon another forward before Tuesday’s game.

If one of the forwards in protocol – Peyton Krebs, Kyle Okposo and Alex Tuch entered early last week – clears and practices today, Granato likely wants him to have more than one practice before playing a game.

Winger Brett Murray, who played 15 straight games with the Sabres before they sent him down Friday, would possibly be their first option for a recall.

Murray, 23, played for the Rochester Americans on Friday and Saturday.

“We absolutely wanted him to go play games,” Granato said. “I think for him and part of the process for him, based on watching him here, is there’s still a benefit to playing minutes in Rochester for him. He’s evolving. … His quest to become a full-time NHL player, that is an avenue that can help him become a more effective full-time NHL player, going and playing some minutes down there.”

Granato said returning to the AHL offers Murray an opportunity to work on things he couldn’t in the big leagues.

“And it’s a whole different hindsight going back down there now, too,” Granato said. “So I wouldn’t rule him out for Tuesday.”