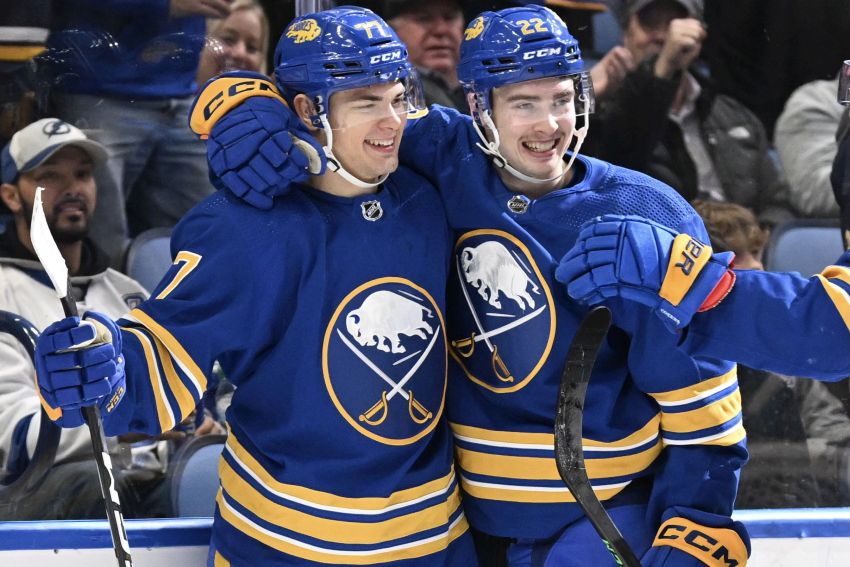 JJ Peterka (left) and Jack Quinn have been struggling since getting hot in November. ©2023, Micheline Veluvolu

On Tuesday, the Sabres scratched the struggling rookies. Rasmus Asplund and Vinnie Hinostroza, both of whom had sat out nine straight games, replaced the youngsters on a line with center Dylan Cozens.

Peterka had played every game this season.

“(They) have not been playing as well as they’re capable of lately, and we think that will help them take a step back, take a breather,” Sabres coach Don Granato said in KeyBank Center. “Obviously, we’ve got two guys that have been out for some duration with Aspy and Vinnie that we feel this is a good opportunity to get in there and give the other two a little bit of a rest.”

Quinn, 21, and Peterka, who turns 21 on Saturday, found a groove in late November, establishing themselves as scoring threats on the Sabres’ second line.

But they haven’t produced much offense over the last month. Quinn has a 13-game goal drought, while Peterka hasn’t scored a goal in nine outings.

Their ice time has dropped below 10 minutes in some games.

Fresh off a dreadful team effort in Monday’s ugly 4-0 loss to the Philadelphia Flyers, Granato said it would be a good time to insert “energy guys” Asplund and Hinostroza. They hadn’t played since Dec. 15.

Earlier in the season, the Sabres rotated some forwards in and out. Over the last little while, however, Granato has been reluctant to mess with his team’s rhythm.

“The challenge is they probably deserve and they did deserve to play sooner,” Granato said of Asplund and Hinostroza. “But when you’re winning and you’re having a rotation like we had earlier in the year, it creates more, it can sidetrack you psychologically. It’s not easy for those two to be out, but if you start rotating guys now, you got three, four, five, six guys worried about being out. That does cause a lot of anxiety for guys not knowing whether they’re in or out every night. The group that was in can stay focused on the next game and the next game.”

Granato believes sitting and watching a game can help Quinn and Peterka. In late October, Quinn took off after he was scratched twice.

“It’s always a benefit to be able to step back, as I’ve mentioned many times,” he said. “We’ve seen it help guys.”

Sabres goalie Eric Comrie started Tuesday’s game, his first NHL action since Nov. 16. He missed 20 games recovering from a lower-body injury before he backed up on Monday.

Granato said goalie Ukko-Pekka Luukkonen, who was expected to start, is sick. In a paper on Monday, the Sabres sent Luukkonen to the Rochester Americans. They planned to recall him before Tuesday’s game. He’s still on Rochester’s roster.

The Sabres did, however, create a roster spot on Tuesday by placing defenseman Casey Fitzgerald on waivers. Defenseman Henri Jokiharju, who missed 11 games recovering from a lower-body injury, was activated from injured reserve prior to the game and made his first appearance since Dec. 9.

Fitzgerald, 25, had sat out the last six games as a healthy scratch. He has compiled three assists in 23 games this season. He was recently passed on the depth chart by defenseman Kale Clague.

“Anytime you put a guy on waivers, it’s difficult,” Granato said. “When you have the 23-man roster, you definitely know you’re going to need more than 23 players through a season. So that is a very challenging component to I think all of us putting the roster together.

“And personally for me, Casey, we’ve been together a long time. So, yeah, it’s not a fun thing to put a guy on waivers.”

With Jokiharju back, the Sabres scratched defenseman Jacob Bryson and kept Clague in.

Granato said the Sabres have “been very happy” with Clague, who began the season in the minors.

“We feel he can continue to progress, he’s adding things to his game day by day as he gets more familiar,” he said. “I think that’s an opportunity for him to continue to grow. But it’s a tough decision, it’s a close decision, anyway. But lots of different variables go into it, thoughts go into it.”