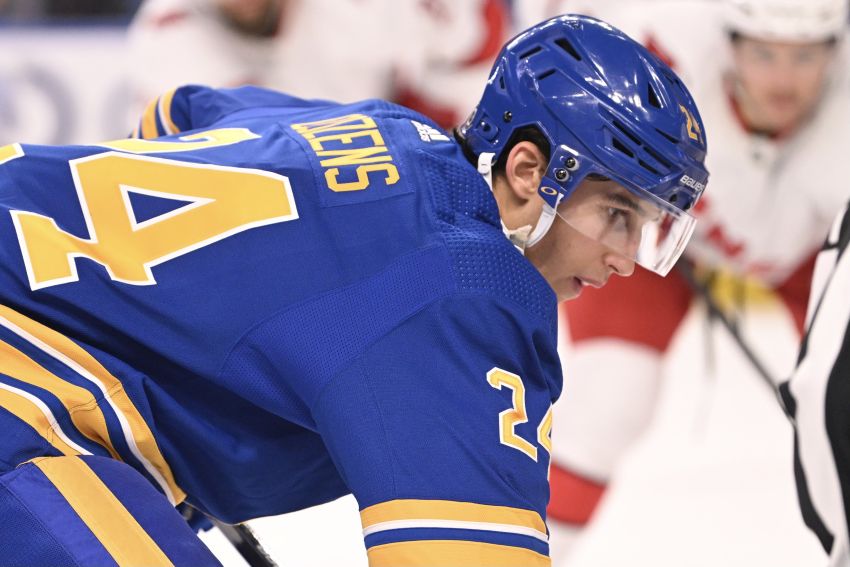 Dylan Cozens has been on a tear over the past few weeks. ©2022, Micheline Veluvolu

BUFFALO – Forget about Dylan Cozens’ skill set for a moment. What makes the Sabres center such a unique talent and one of the NHL’s burgeoning young stars are the intangibles he possesses.

“He competes for the right reason being in a team sport,” Sabres coach Don Granato said following Tuesday’s practice at KeyBank Center. “He brings guys in with him, he drags people into the fight, per se, which is a real indicator of his leadership and leadership ability going forward.”

Cozens, for example, sometimes tells Granato he wants to face the opponent’s top line all night. Or following a game, he might be unhappy with some of the opposing players.

“He’s like, ‘Next game I want to play against that line,’” said Granato, whose Sabres play a road game tonight against the Columbus Blue Jackets. “So that competitive juice flows.”

That ultra-competitive nature has recently helped unlock Cozens’ scoring potential and elevate him into elite company. The Yukon native has registered four goals and nine points during his four-game point streak. Those gaudy numbers earned him the NHL’s Second Star for the week ending Sunday.

In his last eight outings, Cozens has compiled five goals and 13 points, the league’s seventh-highest total since Nov. 19.

Not coincidentally, that’s when Granato shifted Cozens between rookie wingers JJ Peterka and Jack Quinn, forming a trio of youngsters all 21 and under.

“(Cozens is) driving that line, obviously, and then you got two guys on the wings that are extremely confident,” Sabres captain Kyle Okposo said. “It’s a lot of fun to watch, to be honest with you. They’re just making so many plays it seems like every time they’re on the ice they’re a threat to score.”

“He’s doing so many little things really, really well,” he said. “And … it’s mounting into one big storm where he’s taking the game over. And it’s been really fun to play alongside him because of that.”

Coaches, of course, rarely assemble lines featuring all neophytes. But Granato said he had “no hesitation” putting Peterka and Quinn, who have played a combined 49 NHL games, with Cozens, who has played 145 times.

“(There are) too many players sprinkled out throughout the league that are under 24, 25 that are just star players on their own teams,” Granato said. “So I’m very familiar with the development of players that age and what they can do in their capacity. It’s exciting to know the talent we have in our organization that’s young, to be here coaching, to be able to help them reach that.”

Cozens has showcased consistent development over the past two years. Last season, he compiled a career-high 13 goals and 38 points in 79 games. As the campaign progressed, he generated more offense but couldn’t finish many of his opportunities.

“Last year, even though I wasn’t scoring as much, I knew the chances were there, and that’s what matters, getting the chances,” he said. “Sometimes you’re just snakebitten. Every player goes through that. So I was just trying to every day just not get too frustrated and just know that it’s going to happen, and when the floodgates open, they open.”

Overall, Cozens has registered nine goals and 24 points in 25 games this season, numbers that each rank fourth on the team. Right now, he’s on pace to record 30 goals and 79 points this year.

“There was always an offensive ability that was just a matter of time before he unlocked (it),” Okposo said. “And I think he’s getting confidence now knowing when to skate, when to slow, when to use his linemates. And his game, it’s growing and it’s only going to get better.”

Krebs and Jost switched lines during Sunday’s 6-3 win over the San Jose Sharks.

“I liked the way the game was going, and I thought, ‘Boy, this is actually an opportunity now to flip those centermen and maybe give a jolt to both lines,’” Granato said. “And it certainly did for Krebs. Krebs, Girgensons and Okposo were really, really good in that period.”

Goalie Eric Comrie, out since suffering a lower-body injury on Nov. 16, has started very light rehab skates, according to the Sabres.