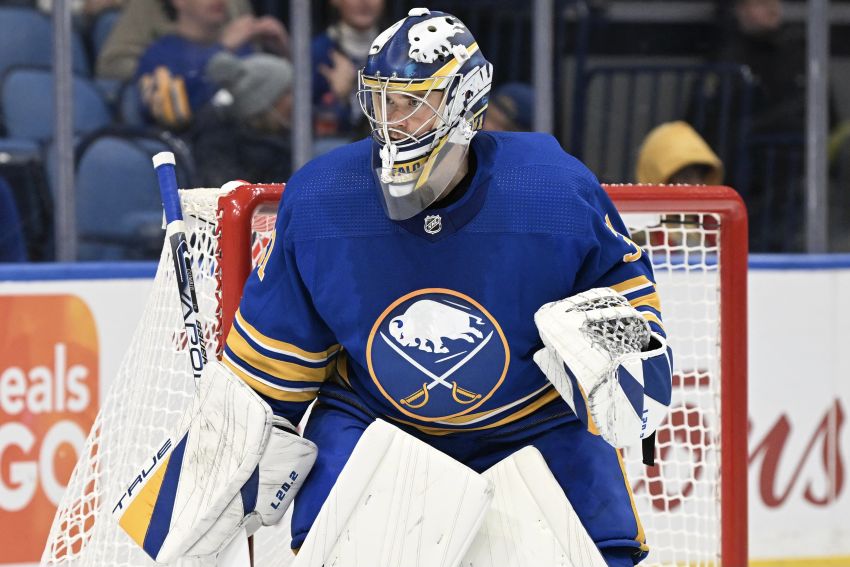 Eric Comrie made 18 saves on Tuesday in his first start since Nov. 16. ©2023, Micheline Veluvolu

BUFFALO – For the first time in six weeks, the Sabres have hit a bit of a rut, losing two straight games in regulation.

The good news is they got some of their mojo back in Tuesday’s 4-3 setback, generating offense again while taking the Seattle Kraken down to the wire. They looked much better than they did in Monday’s dreadful 4-0 loss to the Philadelphia Flyers.

The Sabres, however, couldn’t capitalize on chances they usually finish, and Seattle scored two third-period goals to break a 2-2 tie and win its sixth straight game.

Monday’s outing was so wretched Granato said he couldn’t show his team video of the game “because we were out of sorts.”

“Tonight, you lay out a game plan and we played with much better energy,” he said. “At least you can take this game knowing the guys played the way they did and tweak and improve. It’s a lot easier to feel good about things when you … can take that film and get better.”

The Sabres, the NHL’s second-highest scoring team, pumped 35 shots on goalie Philipp Grubauer, including 18 in the third period.

“They capitalized, and we didn’t, honestly,” said Sabres winger Alex Tuch, who scored two goals. “I thought we had some momentum for the majority of the game and when we kind of sat back a little bit, got a little frustration, left some spots open in the D zone and that’s when they capitalized. Couple turnovers. I thought it was little bit better than last night, but we have to take a bigger step to beat a team that’s been playing really well.”

Tuch continued his career-best season, opening the scoring 9:56 into the game before Jordan Eberle’s power-play goal tied the game later in the first period.

Defenseman Rasmus Dahlin’s power-play goal 5:12 into the second period, his 13th goal this season, put the Sabres back up. The Swede tied his career-high goal total he set last season in just his 38th game.

Then Seattle took over, scoring three straight goals before the crowd of 13,219 fans at KeyBank Center. Yanni Gourde tied it 8:59 into the second period. Matty Beniers put Seattle up 1:06 into the third period before Justin Schultz added some insurance at 5:17.

With Sabres goalie Eric Comrie pulled for an extra attacker, Tuch scored again at 19:38, his 20th goal this season, tying his career high he set with the Vegas Golden Knights in 2018-19.

Comrie, who just returned from a lower-body injury, wasn’t supposed to start on Tuesday. But Ukko-Pekka Luukkonen showed up sick in the morning, so Comrie played his first NHL game since Nov. 16.

The Sabres hadn’t dropped two straight contests in regulation since their eight-game losing streak from Nov. 4 to 18. They lost consecutive games Dec. 9 and 10 but fell in overtime the first night.

Since entering the NHL last season, Seattle has beaten up on the Sabres, winning all four meetings and outscoring them 21-10.