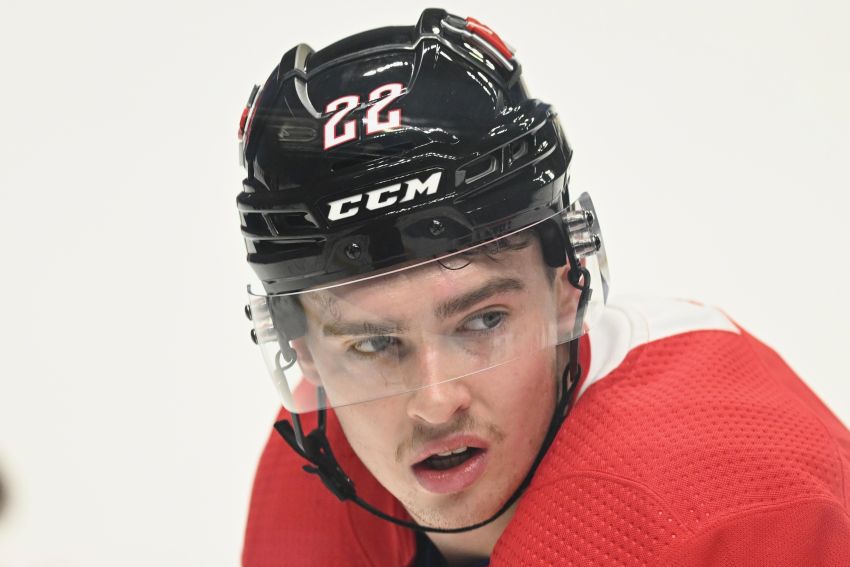 BUFFALO – The first quarter of Sabres rookie Jack Quinn’s season can be broken down into three parts.

In the early going, Quinn, 21, looked overwhelmed. So he embraced sitting out two games as part of the Sabres’ forward rotation, using it as an opportunity to catch his breath and study the game from a fresh perspective. The time helped him develop a better understanding of the team’s system and the intensity needed to compete.

When the slick winger returned, he looked more engaged and began creating offense. His confidence soared, and it felt like he might break out at any moment.

In a six-minute span, he tripled his season total, scoring from the right circle at 12:44 before keeping the puck on a two-on-one and slickly undressing goalie Jordan Binnington at 18:43.

“You saw, he gets one and then he gets another. That’s huge for him and for confidence moving forward.”

After Quinn pumped a career-high six shots on goal in Tuesday’s 7-2 road win over the Montreal Canadiens, he felt like he would score soon.

“I had the feeling a little bit … because of how well our line was playing and how many chances we were getting,” said Quinn, who has compiled three goals and nine points in 15 games this season. “At one point, you’re hoping one’s going to go in when you get that many looks like we were getting.”

Since returning from an undisclosed injury Saturday, Quinn has been skating at right wing beside Cozens, 21, and Peterka, 20, another rookie. Cozens, who’s seven months older than Quinn, has played 140 NHL games, 101 more his linemates have combined.

In just over 41 minutes of ice time together, Quinn, Cozens and Peterka have generated a Corsi For of 65.5 percent, according to NaturalStatTrick.com, the second-highest number among regular Sabres linemates.

Granato often talks about how Quinn, the eighth overall pick in 2020, targets areas to improve. In recent weeks, he has been working closely with assistant coaches Jason Christie and Matt Ellis.

“He’s picked up more and more of what we expect of him and what the other players are in this league and how challenging they are in different situations,” Granato said. “So situational awareness, and he’s picked it up fast to the point where now it’s second nature to him. It doesn’t break his confidence. He reads a play quicker. He reads danger quicker. He reads opportunity quicker. And he’s gained more comfort as a result.”

Sabres winger Jeff Skinner has performed dominantly in the past two contests, recording a whopping four goals and seven points. Following a five-point night Tuesday, he scored at the 18-second mark against the Blues, beating Binnington high from the goal line. He later added a power-play goal.

When Skinner’s on his game, Granato said “he’s usually engaged in referees and with linesmen and with opposing players.”

Skinner loves yapping on the ice and from the bench.

“When we see him with that emotional energy just bursting out and I usually get a warning or two from the officials and there’s a lot of ‘beaking’ going back to the visiting bench or the opposing bench, you know he’s on his game. That’s when he’s at his best. He’s fully engaged and his competitiveness just rises in those situations.

“And, obviously, when that happens, you see the talent.”

Notes: The Toronto Maple Leafs ended the Devils’ franchise-record 13-game winning streak on Wednesday, beating them 2-1. … Sabres defenseman Jacob Bryson did not play in Wednesday’s third period. … The Sabres had Thursday off.

Jack Quinn undresses Binnington for his second of the game. 6-2 #LetsGoBuffalo #stlblues pic.twitter.com/2hX1lTGBeZ